How To Get Started With Stocker Cattle

You can convert pasture to profit by purchasing stocker cattle as calves in the spring, then selling them in the fall as feeder cattle. 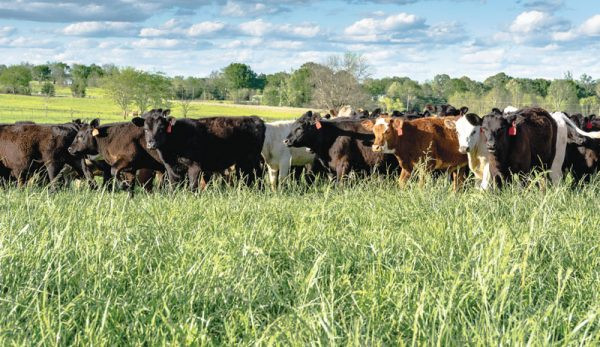 Jason Detzel‚Äôs Diamond Hills Farm in Hudson, New York, started as a cow/calf operation. When the social-worker-turned-farmer accepted a full-time position with the Ulster County Cooperative Extension office, he didn‚Äôt have the time for harvesting crops and maintaining equipment.

But he didn‚Äôt want to give up cattle all together. Instead, he transitioned his business into a stocker operation. He now runs between 50 and 75 black Angus on his 130 acres.

The University of Kentucky describes a stocker calf as a steer or heifer that is 6 to 9 months of age and weighs 400 to 700 pounds. After weaning from its mother, a stocker is put on grass or some other type of forage to promote growth and weight gain.

‚ÄúThis is a great definition. And there are some hints in this definition that help define the practice of raising stockers,‚ÄĚ Detzel says. ‚ÄúThese cattle, both steers and heifers, are grazing to grow. These are ‚Äėteenage‚Äô cattle. It‚Äôs important for them to have the most nutritious and stress-free lifestyle so they can grow healthy and put on pounds.‚ÄĚ

Stocker operations look for ‚Äúbargain‚ÄĚ cattle, put weight on them and then sell them to a feedlot for finishing, according to Dale Blasi, a professor/extension specialist at the Kansas State University Beef Stocker Unit.

The school‚Äôs 1,120 acres of native warm season grass is divided into 20 paddocks. The facility can accommodate more than 400 head of 500-pound calves at any one time. These animals are used for research studies on production-related topics.

Read five things you need to know before getting into the freezer beef business.

The stocker cattle market is an opportunistic one. Typically, stocker buyers ‚Äúbuy ‚Äôem ugly and sell ‚Äôem pretty‚ÄĚ by finding cattle that are have recently been weaned or are coming out of their first winter. These animals likely look a little rough and need TLC. However, that doesn‚Äôt necessarily mean it‚Äôs the most advantageous to buy the cheapest animals. After Detzel‚Äôs first year in the stocker business, he lost $1,000.

‚ÄúI went against all the recommendations when I bought my first round of stockers,‚ÄĚ he says. ‚ÄúI bought the worst-looking cattle at auction. They had pneumonia and pink eye. I‚Äôm running pasture animals and didn‚Äôt have the indoor facility to rehab them.‚ÄĚ

With preparation and knowledge about what to look for in bargain cattle, getting into the stocker business can be lucrative.

Finding bargain cattle is the key to success with the stocker market, but it needs to be strategic. Sickly animals or uncastrated bulls require more attention and the right facilities to be brought back to health.

‚ÄúThey should be properly weaned,‚ÄĚ Blasi says. ‚ÄúIf calves are bawling or commingled from numerous sources together, it means they were just separated from their mother and thrust into a challenging environment. Things can fall apart quickly for these calves.‚ÄĚ

Blasi compares this environment to a kindergarten classroom, where one kid comes to school with a runny nose, wipes it with their hand or sleeve and spreads to their classmates. Buying vaccinated cattle decreases the chances for common diseases such as pink eye and bovine respiratory disease, which is similar to pneumonia in humans. Knowing the seller seems to improve a buyer‚Äôs chances for acquiring healthier cattle.

‚ÄúMany feeders will background calves into a stocker program,‚ÄĚ Blasi says. ‚ÄúThey may offer this service to clientele they know specialize in stockers, and it can make a good partnership.‚ÄĚ

Detzel has found that establishing a relationship with a cow/calf operation has increased his chances for success.

He paid more for preconditioned cattle who were vaccinated. His contract with the seller included treatment of any sick after they arrived on his property.

The investment paid off. He only treated two cattle in 2019. Overall, the herd averaged a higher daily weight gain than the previous year.

Buying better quality stock also means being prepared to reject a delivery of cattle or walking away at an auction.

‚ÄúIt can be difficult to source the cattle you want, but that doesn‚Äôt mean that you are locked into one choice,‚ÄĚ he says. ‚ÄúStart your search early, and work with established buyers and producers. Get involved in a local stocker sale, and talk with your local providers. Chances are they can help you generate a few different names to source from. Then you can go out have a look and have your pick.‚ÄĚ

Immunization is only one piece of the equation. Blasi says that cutting bulls or those that have not been castrated at birth is also a riskier investment. The market views this as a detriment because the castration process is much more difficult on the calf than if it was done at a younger age. Castrating at an older age is also physically harder for the animal to recover.

‚ÄúIt‚Äôs mostly a humane issue,‚ÄĚ he says. ‚ÄúThere are people who specialize in these cattle because they have the facilities and expertise to care for them.‚ÄĚ

Read about the different methods of castrating calves.

Pack on the Pounds

The stocker cattle industry is built on the premise that farmers buy small cattle with the intention of achieving maximum weight gain in about 90 days. Most often, these cattle are grazed, meaning it‚Äôs imperative to provide enough good quality forage to sustain the herd.

‚ÄúYou‚Äôll shoot for a daily gain between 1 1‚ĀĄ2 to 3 pounds a day,‚ÄĚ Blasi says. ‚ÄúA granular additive such as Rumen¬≠sin or Bovatech may assist with feed efficiency. These provide supplemental energy and protein to assist in the digestion of lower quality forages.‚ÄĚ

When the cattle start out thin and ragged, they‚Äôll gain at a quicker rate on spring forage. That’s because they‚Äôre eating better than they previously had.

If you purchase spring cattle that are already fat and not conditioned from the winter and spring weather you run the risk of having your animals lose weight for the first month that you graze them. The key is providing enough space in the pasture for the cattle to lounge and ruminate, and carry low stress.

Detzel intensively manages his pastures, limiting the need to buy hay or provide feed. Last spring, he spent an hour each morning moving water, pasture line and minerals to give each pasture resting time for regrowth.

By mid-summer, he was moving pastures every few days. But Detzel never allowed access on any one lot for more than four days. He then rested the pasture for at least 30 days and sometimes as many as 60 days.

‚ÄúThe cattle will tell you if they‚Äôre not getting enough to eat,‚ÄĚ he says. ‚ÄúThey‚Äôll have good-looking coats, and they‚Äôll be spread across the pasture rather than balled into a group.‚ÄĚ

Monitoring the animal‚Äôs rumen fill provides a visual assessment of their nutrition.

The rumen fill is a triangle shaped area on the left hip of the cow. When the cow receives enough to eat, it‚Äôs flat and fleshy, rather than concaved in towards their hip.

‚ÄúDo not overstock your pastures,‚ÄĚ Detzel says. ‚ÄúNew stocker operators tend to overestimate the amount of forage they have when they realize that they will not have to graze their [cattle] late into the season because they will likely be sold in the early fall.‚ÄĚ

Unfortunately, Mother Nature doesn‚Äôt care about your plans. If the weather gets droughty and you have to feed hay, you can kiss those short margins and profits goodbye.

‚ÄúMy biggest piece of advice is to sit down with an extension professional, an NRCS grazing consultant or any of the other fine experts that inhabit our national agricultural agencies,‚ÄĚ Detzel says. ‚ÄúThese folks can help you set up your grazing, water and marketing plans. Best of all, they have likely seen and heard it all, so they can help focus and refine your year on grass.‚ÄĚ

Buyers know what they want and will pay top dollar for it. However, they are quicker to take discounts for things they see as detriments.

Knowing what auctions pay more for or take discounts can help producers maximize their product. The 2011-2017 study Factors affecting the auction price of New York feeder cattle, by Minhao Yan, Michael J. Baker and Miguel Gomez evaluated the price per pound of 30,000 head of cattle. The results give New York farmers an idea for the ways people are getting paid at auction.

Certified Angus Beef is the market standard, with black Angus bringing premium prices and their red cousins a close second. Easter egg or multicolored cattle, yellowish colored cattle and anything with big ears tend to get a bad rap and discounted at auction.

Detzel has a few white cows in his herd and one with horns, which he knows are really going to get discounted.

Cattle that are thick, muscular and have records for immunizations also bring the best prices. Uncastrated bull calves and those with horns are significantly discounted, up to $25 per hundred weight.

Geography plays a significant role in prices. For example, cattle sold in New York auctions bring less money than in other beef-producing states.

Detzel paid to ship his cattle out of state in hopes of bringing in more money per pound. Load size also contributes to the price buyers are willing to pay. Even though the average herd size in the United States is less than 100 head of 500-pound cattle, buyers want to know a grower has enough cattle to make a sizable load.

‚ÄúVisit with potential buyers and make them aware of what you have available,‚ÄĚ Blasi says. ‚ÄúMaybe you‚Äôll even have a chance for a private treaty.‚ÄĚ

Detzel leverages his relationship with the producer he buys his calves from. Together, they go in on trucking and ship their cattle out of state to auction in Missouri. There, they‚Äôll bring a higher price than New York auctions.

When it‚Äôs time to ship the cattle, how they are handled can significantly impact their weight and ultimately the price they bring.

Stressed cattle drop weight quickly under stress. They can easily lose 40 to 50 pounds through intercellular water loss and manure production when they are kept in a holding pen for too long.

‚ÄúWe take two percent shrink off the top because of undigested feed in the digestive tract,‚ÄĚ Blasi says. ‚ÄúThe more stressed the animal is, the more potential you have for losing a lot of value.‚ÄĚ

Success with stocker cattle is akin to walking a fine line. To make the most profit, it‚Äôs necessary to buy inexpensive animals. But being ‚Äútoo cheap‚ÄĚ can end up eating into profits over the long run.

‚ÄúGetting into stockers was a time-versus-return issue for me,‚ÄĚ Detzel says, ‚Äúand I didn‚Äôt have to give up my cattle all together. Being out with the herd in the morning moving line or water is the best way to start my day.‚ÄĚ¬†

This article originally appeared in the January/February 2020 issue of¬†Hobby Farms¬†magazine.