The key to controlling this corn pest is to spot an infestation early. 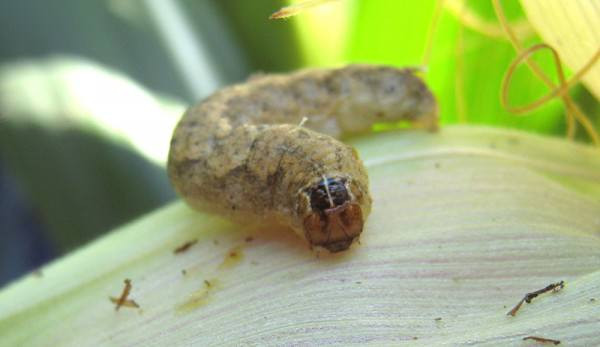 Despite its name, the western bean cutworm is a pest of all kinds of corn‚Äîfield, sweet and seed‚Äîthough it also appears on edible beans (except soybeans) and, to a lesser extent, tomatoes and other nightshades. Unlike other cutworms that are true to their name, cutting the plant when young, western bean cutworms feed on the fruit of the plant, such as the corn ears and bean pods.

Tracey Baute, a field crop entomologist and the program lead with the Ontario Ministry of Agriculture, Food, and Rural Affairs, is likely Canada‚Äôs best expert on this pest. In 2008, for the first time ever in Ontario, trap captures found western bean cutworm moths present, though no damage was documented.

‚ÄúWBC has established itself, successfully overwintering and impacting yield and quality of corn in some regions of Ontario,‚Äù says Baute, noting that damage has been found in dry beans too over the last few years.

The pest overwinters as larvae in soil chambers, and Baute says the adult moths are easy to identify: A white band runs along the edge of each wing with signature moon and boomarang-like marks. They start to appear in early to mid-June in Canada‚Äôs cool climate, when corn is in the whorl to pre-tassel stage. They lay their eggs on the upper surface of the leaves, preferring the hybrid varieties with upright leaves.

‚ÄúOnce the corn crop is in tassel or beyond, they prefer to lay their eggs on dry bean crops,‚Äù Baute says. ‚ÄúUnfortunately, the larvae are very mobile and can disperse from the original egg site to other plants in the vicinity, both up and across corn rows. High risk fields include no-till fields and fields with sandy soil.

The young tan-to-pink larvae munch on the tassels and silks, and once large enough, they tunnel to the ear‚Äôs kernels, where they feed. If you look closely, you can see their entry holes on the outside of the husk, though they may also enter through the silk channels, in which case, their damage won‚Äôt be visible. Because western bean cutworms are not cannibals, multiple larvae can feed on the same ear, leaving little left to harvest.

‚ÄúEstimates on yield loss from other jurisdictions indicate a field infestation of one larva per ear can cause a 3.7 bu/ac loss,‚Äù Baute says. ‚ÄúAdditional impact can be expected from ear rots and secondary pests that may enter and feed on damaged ears.

Older larvae may be eaten by birds and some vertebrates, such as, raccoons and skunks, but once in the ears of the corn or pods of the beans, they‚Äôre protected from predation.

Scouting For Western Bean Cutworm In Your Fields

‚ÄúIn corn, scout 20 plants in five areas of the field from the end of July to the end of August,‚Äù Baute advises for northern areas, though you may want to check with your extension agent to find out when your area is most at risk. ‚ÄúFocus on fields in the pre-tassel stages and inspect the top three to four upper leaves of the plant. Look for egg masses and young larvae.‚Äù

If you find white egg masses, then that means they are newly laid. Purple means they‚Äôll be ready to hatch in one to two days. Flag plants with white masses, and return in a few days so you can learn when young larvae will be active. If you choose to use pesticides to treat the infestation, this is the stage when it will be most effective.

Rebeca Kuropatwa was born and raised in the prairies of Manitoba, Canada. She shares compelling, inspirational stories of courage, survival and overcoming adversity, reporting not only on current issues but of the women and men behind the headlines. She holds a degree in political science and professional writing and lives in Winnipeg with her husband and daughter.