Storytelling is central to much of farming's history. It just might be the key to preserving its future, too. Here's how that could work. 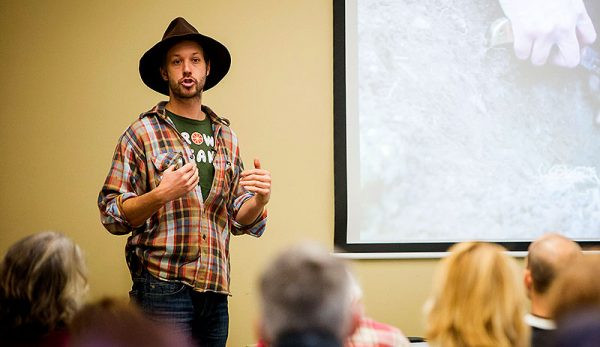 Here‚Äôs the thing‚ÄîI‚Äôm a storyteller. Yes, I‚Äôve had some training in the art of yarn-spinning (I was an English major back in the day), but moreover I suffer from a natural proclivity to use hundreds of words when speaking where just a few would do. Ask me a question, and my response could wind back to touching the warm flesh of sun-ripening vegetables on my grandmother‚Äôs porch or weeding the pitiful garden I planted during my teenage years before finally circling back to say that, why yes, I would like sliced tomato on my grilled cheese, thank you very much.

I‚Äôm from Kentucky, sure, but the northernmost part, up by Cincinnati. So I guess you could chalk up my wandering mind to the southern gift of gab, but only technically, as I‚Äôm not overly chatty outside of an unprovoked narrative and, also, that part of the Bluegrass State is, let‚Äôs face it, thoroughly Midwestern (though we love the bourbon that’s made an hour or so south).

It really just comes down to what I said in the opening sentence‚ÄîI‚Äôm a storyteller. I was born to a people that appreciates narrative structure, raised on dubious recountings of my parents‚Äô youthful adventures and, today, prone to seeing a start, climax and natural ending to all life‚Äôs events.

What‚Äôs storytelling got to do with farming? I mean, besides everything.

Agrarian civilizations have, historically, fostered rich oral traditions (see: native American and African peoples), and historical growers of the American South, as well as the scrappy Celtic immigrants who lived and farmed in Appalachia, are known as proud storytellers. We could make numerous conjectures as to why, but this isn‚Äôt an academic journal, and I believe that a few quick observations will seem pretty apparent to many of us.

First, storytelling is an incredibly effective method for passing important information along to later generations. A well-told and oft-repeated tale of a farmer‚Äôs swaggering miscalculation when dealing with an aggressive sow, for instance, is an excellent way to deliver lessons to offspring for dealing with a wide variety of animals on a farm. Recounting summers of great drought and the means and methods by which a farmer learned to capture or collect water to keep the garden growing might seem boastful on its face, but it’s a compelling way to tell the future caretaker of your land, ‚ÄúHere‚Äôs how to keep food growing when the rains don‚Äôt come.‚Äù Stories have a unique way of working themselves into a person‚Äôs long-term memory in ways that pointed instructions often don‚Äôt.

Second, storytelling is crucial to building a mythos around the farming way of life‚Äîthat is, to determine how an agrarian occupation will be presented to the outside world. Some of this can get kind of silly, like caricatures of overalled farmers with straw sticking out of their mouths, but it also pulls in facets such as the importance of family, tradition and a rugged self-reliance. This mythos is self-serving, too, as it reminds us daily, even on days when arctic winds whip into our work jackets or the soggy ground sucks at our boots, that we‚Äôre part of something bigger‚Äîand that what we‚Äôve chosen to do, either as occupation or interest, is nothing short of cultivating sustenance. We‚Äôre farmers, and we grow food.

There‚Äôs a third way in which I believe storytelling to be important that, rather than being handed down from previous generations, speaks to conditions of our time. As the total number of farms continues to plummet (we lost 67,083 farms from 2012 to 2017) and the average age of farmers creeps skyward (it‚Äôs 59.4, by the way), storytelling offers an engaging opportunity to invite more people into agriculture by personalizing the trials and successes of individual farmers.

I wasn‚Äôt raised on a farm, even if I was rural-adjacent enough to develop an appreciation for the work of agrarians in my family and down the street. The desire to raise food for my family and neighbors took root while I lived in a northeast Ohio suburb. How? Well, a lot of it came from the enchantment gardening cast upon me, but even that was fed by a steady stream of farmer stories.

This publication was a strong supplier of said recountings, as was the stack of farm memoirs I kept by my bed. Jenna Woginrich‚Äôs Barnheart: The Incurable Longing for a Farm of One‚Äôs Own and Kurt Timmermester‚Äôs Growing a Farmer presented two different accounts of city folk finding their way to the joys of farm life. The Wisdom of the Radish by Lynda Hopkins detailed the struggle of aspiring market farmers and the joys they found in working the land, and Forrest Pritchard‚Äôs Gaining Ground recounted the author‚Äôs path to sustainable farming, a sound business model and pigs (which I ended up raising just a couple of years later). The stories of Gene Logsdon and Wendell Berry, nonfiction as well as fiction, taught me that the feelings these stories stirred up in me were, in fact, valid and maybe even important.

There‚Äôs no dearth of new farming memoirs as well as instructional books that show traditional methods by personal example (such as The Market Gardener by Jean-Martin Fortier, pictured above), and young people seem to be finding ways to agricultural settings more often these days. But our food system is still comfortably in control of the factory-farm model, and small-scale farming doesn‚Äôt, from the outside, look like a stellar career choice.

So it‚Äôs up to us to spread the word about how great‚Äîand how hard and sometimes how crushing but always totally worth it‚Äîthe farming life is. There are so many ways to tell your stories these days; you can go on a podcast, start a blog, write an essay, speak at a community event or even just set up a Facebook page.

You can also just invite somebody to sit on the porch with you and watch the sunset over a bottle of Kentucky bourbon while you tell them your stories and, hopefully, inspire them to consider a different way of life.