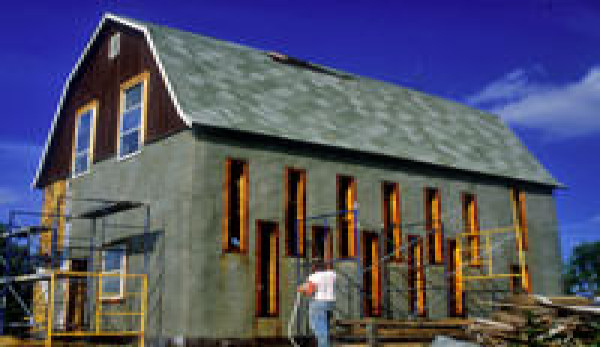 By John Ivanko and Lisa Kivirist

With many creative ways to build practical buildings with straw bale, no two structures are the same.

Of the two barns on our hobby farm, the granary had been a distant cousin to our dairy barn. Every winter, siding or roof shingles would fly off like Frisbees during windy days.

Still, we‚Äôre drawn to old barn buildings, eager to preserve them.
¬†
We gave our granary new life by transforming it into a two-story, super energy-efficient greenhouse‚Äďinsulated with straw bales.

The Authors Start Their Greenhouse
Retrofitting the existing granary, we re-used the roof system, timber framed walls and existing concrete foundation. Since the building faced south, we added doors and glazing to the east, west and south (often using reclaimed materials), and skylights along the steep, south-facing roof.

Creating a 1,200-square-foot structure requiring a nominal heating cost was made possible by leveraging the insulating properties of straw bales.

Interest in and construction with straw bales has skyrocketed recently, but straw-bale construction has been around since the early 1900s, when compressed straw-bale technology first emerged in the Great Plains. With many creative ways to build practical buildings using straw bale, no two structures are the same.

Based on local knowledge, materials, needs and budget, straw-bale buildings involve a community of helpers attracted to the materials, camaraderie and sense of accomplishment achieved after a day of stacking bales or plastering. It‚Äôs a modern-day revival of the barn raising.

In traditional greenhouses, as much as 45 percent of the annual operation costs are associated with heating; successfully growing with little or no heating cost means more profit per vegetable or fruit crop sold, or, in our case, served up in breakfasts for our Inn Serendipity Bed & Breakfast guests.

Building with straw bales means that with a little help, even the most inexperienced homeowner can build a house or other functional structure out of straw bales while rekindling a connection to the environment and gaining the satisfaction of building something yourself.

With post-and-beam infill construction, like the one we used on the granary, straw bales are inserted between supporting studs and other framing that supports the roof.

Load-bearing construction, more often challenged by zoning and commercial codes, means that the roof and windows are supported by the straw-bale walls.

Most straw-bale buildings feature a ‚Äútruth window,‚ÄĚ usually a transparent viewing window where no stucco has been applied to a section of the wall. Besides the truth window, various design elements can also be incorporated into the walls: light tubes made from wine bottles, tile mosaics, intricate wall sculptures and recessed cubbyholes.

Since there‚Äôs little food value in the straw, there‚Äôs a greater likelihood of getting mice in your farmhouse kitchen than a straw-bale building; plus, the rodents would need to gnaw through as much as two inches of plaster just to get to the bales.

Many people remain convinced of fire hazards associated with straw-bale construction despite the fact that as much as two inches of fireproof mud, sand and cement completely surround the bales, making it practically impossible to ignite them. Straw-bale buildings are healthier and safer than most conventionally constructed buildings.

In terms of cost, straw-bale buildings end up about the same per square foot as conventional buildings. Savings, however, come in reduced energy needs when operating the structure.

Our greenhouse, filled with papaya, and a banana and lime bush, costs about $600 a year to heat, the cost of which mostly results from our processing of biodiesel. Electricity for lighting and the furnace blowers is produced on site with a 10 kW Bergey wind turbine and solar electric system. Plus, it‚Äôs not a bad place to pass the Wisconsin winters.

About the Authors
Lisa Kivirist and John Ivanko are co-authors of ECOpreneuring, Rural Renaissance and Edible Earth. Drawing inspiration from their hobby farm, each book captures a slice of their journey to live and operate their Inn Serendipity business more sustainably.