Courtesy Purdue University A Purdue University student patented a solar-powered motorcycle, and then started a club to work with other students on creating other electric vehicles. Physics major Tony Danger Coiro, a junior from South Bend, Ind., received a provisional patent for his motorcycle that uses solar energy to cut his transportation costs down to […] 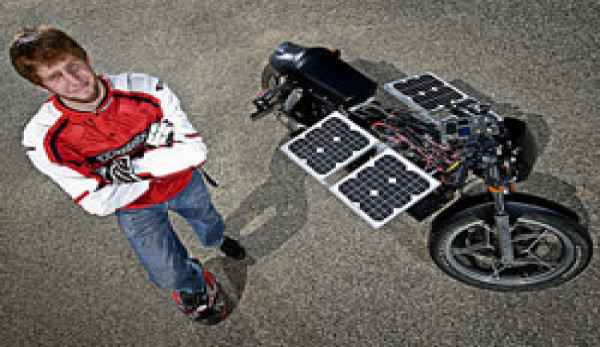 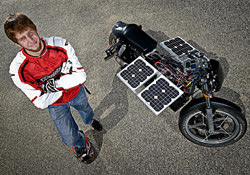 A Purdue University student patented a solar-powered motorcycle, and then started a club to work with other students on creating other electric vehicles.

Physics major Tony Danger Coiro, a junior from South Bend, Ind., received a provisional patent for his motorcycle that uses solar energy to cut his transportation costs down to well less than a penny per mile. The lead acid batteries also can charge from plug-in AC current.

After purchasing a 1978 Suzuki for $50, Coiro spent $2,500 redesigning and retrofitting the bike, which gives him a range of up to 24 miles per charge and a top speed of 45 miles per hour.

“The riding experience is surreal,” Coiro says. “I get instant, silent, constant acceleration that outpaces urban traffic. It’s like riding a magic carpet.”

Kleinschmidt, a mechanical engineering major, translated that success into a summer internship at Tesla, where he helped develop batteries for the makers of the world-class, all-electric sports car. Danielson, who is majoring in electrical and computer engineering, spent his summer developing motor control electronics for Electro Motive Diesel, which designs and manufactures diesel-electric locomotives.

“Purdue Electric Vehicles will encourage enthusiasm for, and knowledge and development of, electric vehicles by students and the community,” Coiro says.

Coiro says the Purdue Electric Vehicle Club will patent and commercialize its breakthrough technologies and feed proceeds back into research and development of new prototypes. Coiro is already designing a 100-horsepower motorcycle that will travel up to 100 miles per charge, top 100 mph and draw even more of its energy from the sun. The all-wheel-drive bike will include motors in each hub and no drive trains.

“I’ve learned a lot building this first bike, and now I’m ready to make a game-changer,” he says.

Coiro, Danielson and Kleinschmidt oversaw construction of the 17 electric race karts that students built for the first-ever electric vehicle grand prix, held at Purdue in spring 2010.

In 2011, that race is expected to draw student teams from throughout the Midwest. The race was created by Purdue’s Indiana Advanced Electric Vehicle Training and Education Consortium to demonstrate the possibilities of electric vehicles and train a new breed of young engineers to improve them and reshape the auto industry in Indiana and beyond.

“Electric vehicles are four to five times more efficient than internal combustion enginesâ€”that’s a big difference,” Coiro says. “They’re not the solution to our energy problems, but they will be an increasingly bigger piece of the puzzle.”

When he graduates, Coiro plans to launch a company that develops electric vehicles. Eventually, he foresees launching a nonprofit energy company.

“Gas is not in infinite supply, so we need to go to another energy source in the future, be it nuclear fusion or fission, solar, or wind,” he says. “It’s going to be a lot easier to charge an electrical vehicle off of the grid.”