The large, easy-going Suffoks can be used for heavy hauling. 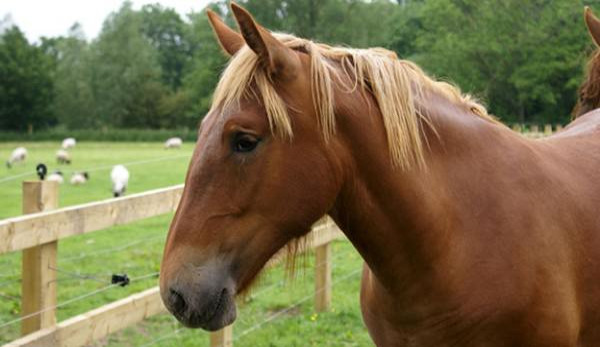 Use: Suffolk Horses are used primarily for heavy hauling, whether on the farm or at draft horse shows. These horses can also be ridden.

History: Unlike most other draft breeds, the Suffolk Horse (also known as the Suffolk Punch) was developed primarily as a farm horse and not for war. The breed originated in Norfolk and Suffolk Counties of England. Isolated from other counties because of geography, Suffolk farmers developed the breed to accommodate their way of life. The areaâ€™s heavy clay soil was difficult to plow and called for a horse that was not only powerful, but also rugged and easily to manage. The breed was used to till and harvest, and individuals were rarely sold. Records on the breed date back to 1880, and show the breed to be pure due to its geographic isolation. The breed was imported into North America in the late 1880s, but decreased in numbers as more farmers switched to mechanized farm equipment. The breed nearly died out. In the 1960s, the few breeders of Suffolk Horses who still existed reformed the American Suffolk Horse Association, an organization that ceased to function in the 1940s during World War II. In the 1970s, more Suffolk Horses were imported to the United States from England to help expand the breedâ€™s gene pool. By the 1980s, the breedâ€™s numbers had increased. Today, the Suffolk Horse is still rare, but is slowly recovering. There are currently between 800 and 1,200 Shires in the United States. Only 150 Suffolks still exist in England. The American Livestock Breed Conservancy considers the breed â€ścriticalâ€ť on its conservation list.

Conformation: Suffolks are large horses, measuring anywhere from 16.1 to 17 hands, and weighing from 1,400 to 2,100 pounds at maturity. Suffolks have large, straight or convex heads with active ears, and a powerful, arching neck. The shoulders tend to be upright, making them suitable for power. The back is short and strong, and the hind quarters long and smooth. The only color allowed in the breed is chestnut, and can range in shade from light golden to dark liver. Some horses have white markings, usually only a star or snip and white ankles or fetlocks. Suffolk are known for having gentle and easy going temperaments, and a willingness to work.