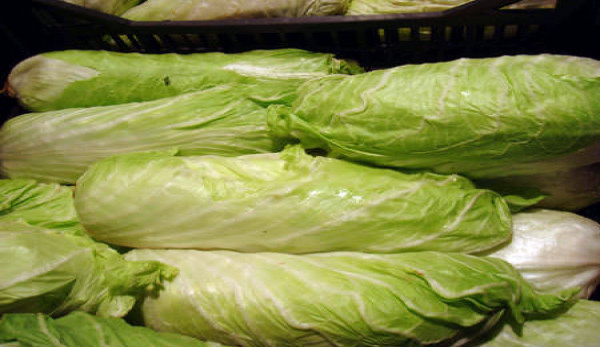 Sugarloaf chicory is one of those poor crops that gets lost in the glare of its spectacular neighbors. The most exciting chicories in Italy are the bright-red radicchios, which are the closest cousins to the sugarloaf forms. The most famous green-headed chicory is Belgian endive, but in many parts of Europe, farmers also grow a lot of other green chicories that make larger and tightly rolled heads â€” Bianca di Milano and Pan di Zucchero.

Known as the sugarloaf chicories in English, all of these chicories have green, football-shaped heads with white-veined leaves rolled tightly around them. The leaves of chicories are much more bitter than lettuces and most other salad greens, so itâ€™s no surprise that a lot of the recipes that include sugarloaf chicory call for cooking it, sometimes by braising; the heat seems to tone down the bitterness. Sugarloaf chicory can also be a nice, raw green when the tender, blanched center leaves are used; the blanched leaves are considerably less bitter.

Grown as a fall and early winter-harvest crop, the seeds of sugarloaf chicory are sown in late spring or early summer and nursed until the shorter days and cooler fall temperatures allow the explosion of growth that makes the heads form. Once the heads form, the crop can be left in the field and harvested as needed. Many growers manage to pile mulch around and over the mature heads to protect against snow and freezing damage during the early winter, and so allow a harvest of fresh greens in December, even where it snows.

Sugarloaf chicory is a perennial, which means it regrows. The most forward-thinking gardeners grow patches of perennial chicories and allow the plants to spread by division and self-seeding. The plants are surprisingly drought-tolerant and donâ€™t appreciate being grown in boggy situations. Ideal conditions are similar to those for carrots, with soft, sandy soil and good drainage being preferred. Taproots generally donâ€™t like rocky soils.

Of course, being chicory, you can force sugarloaf roots. Roots intended to be forced are dug, the green tops cut off, and then the roots stored in the refrigerator for about three weeks. Then, the roots are planted in a loose mix and placed in a warm and dark environment. The roots will think they have experienced winter, and when they feel the temperature rise, they will push out a new flush of deliciously tender growth in about three weeks. This is how Belgian endive is cultured, and the technique works well with sugarloaf roots as well.