On a trip from Kentucky to the Midwest, I learned about my own family homesteading roots as well as American traditions in farming and land stewardship. 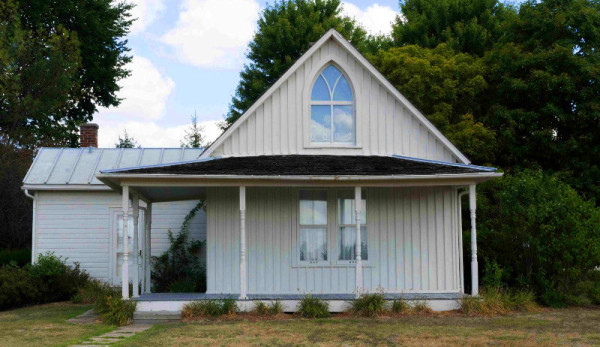 What did I do on my summer vacation? I went on a journey through space, time and the Midwest to track down my farming roots. When I moved to Kentucky five years ago, I hoped to begin growing food. A hundred and fifty years ago, five years of working the land could qualify someone to become a land owner under the Homestead Act. Yet compared with the homesteading work put in by longtime farmers here, five years is nothing. Many of them have deep roots, going back five generations of farming on the same land.

For wannabe homesteaders like me, tracing the family tree is a good exercise in gaining perspective and will inevitably lead to the discovery of farming ancestors of some kind. While I have no memories of any relatives owning land, farming or even growing a substantial garden, my familyâ€™s divergence from a land-based lifestyle occurred less than a century ago. My grandmotherâ€™s father traded in his horse and buggy for an automobile, teaching his wife to drive in the cow pastures. He liked new cars so much he opened auto dealerships in Texas, and the family moved off the farm and into town.

Packing up for a family reunion with relatives I see about once a decade, I chose two cherished keepsakes from the various heirlooms that have been passed down to me: a wool tapestry and a rock. Sometimes we know ancestral stories and we cling to them for the culture and wisdom that feeds our souls. Or, in my case, we might forget details, but just have a sense that an object means something important to us, even if we canâ€™t remember exactly why.

The wool tapestry might have been used as a small blanket, or a floor rug or perhaps a cover on heated bricks that kept feet warm in open-air wagons. Its woolen fibers were sheared off the sheep that my great-great-grandmotherâ€™s family raised. The wool was carded and spun, then dyed with plants found growing on the prairie.

The tapestry was hand-woven and passed down through the generations. When I acquired the cloth, I didnâ€™t know this back story. If I had, I wouldnâ€™t have wiped my feet on it or blocked a draft under my door with it. At the most recent reunion I attended a dozen years ago, my aunt shared the story of the clothâ€™s origins. My great-great-grandmotherâ€™s hands made the woolen rug, shaped the rich earth, and tended her plants and animals. She raised 13 sons and daughters. One of those daughters became the mother of the woman who brought my father into the world. To make amends for the way I had treated this family heirloom, and to preserve its integrity, I moved the cloth to a place of honor, either displayed on a wall or stored with other valuables for safekeeping. I wonder though, would it honor my ancestors more if I actually used it?

The rock also has a story that was revealed little by little. It is accompanied by a scrap of paper with a hand-written note that reads, â€śI certify this rock was part of William Krauseâ€™s farm because that is where it was picked up.â€ť Thereâ€™s no date, no signature, no indication of where or when it was picked up, but it happened within my lifetime. We believe it was written by a relative who has since passed away, but the rock did indeed come from my forefathersâ€™ land. The cousin who still lives on the family land is a geology buff and explained that it was a glacially deposited metamorphic rock called Lake Superior agate. Originating in Minnesota, it was dragged across the continent by glaciers between 10,000 and 15,000 years ago, then deposited on what became the fertile grassland later named Nebraska. He showed me some cut and polished examples of rocks heâ€™d found on the land, with rosy bands of glittering crystals.

My farming ancestors who settled in Nebraska were intimately familiar with the glacial erratics, whether or not they knew the geologic story behind them. They were grateful for the relatively smooth soil they found on the great plains, set up housekeeping for five years, and earned their homesteading patent from the government.

On my travels through the Nebraska, as I drove along the country roads, I occasionally spotted a chunky boulder of similar-looking rock, seated at driveway entrances. Those rocks, few and far between, are selected and used asÂ decorative anchor pieces at modern homesteads amidst a vast sea of corn and soybeans.

Tuning in to this countryâ€™s farming heritage, an awareness of the homesteading theme infused everything I did on my vacation. Visiting another branch of my family in Missouri, we looked at photos of their early days as 20th century pioneers. My aunt and uncle got married on a ranch in the 1970s and set up house to raise kids, of the human and goat varieties. In Iowa, I was a houseguest of a genuine son of a homesteader, age 77. His father was born in 1910; now the son holds onto the original patent document for the ground his father claimed, although the land is no longer in his family. An unplanned rest stop took me to the site of the American Gothic house, where homesteading in the 1930s made its way into fine art via the famous painting by Grant Wood.

But the main attraction that put my journey in perspective was Homestead National Monument, where the Homestead Act of 1862 is commemorated through a modern visitor center, education center, documentary film, restored native prairie and a historic farm implement museum. The highlight for me was the documentary film, which mingled the voices of homesteaders past and present with the original inhabitants, the native people who shared the land rather than owned it. Tribal people and their ancestors viewed land acquisition quite differently; treaties, documents, patents and the like were not practical for nomadic hunters and seasonal farmers, especially when the agreements were not honored by our government. The voice of one homesteading descendant in the film echoed in my head as I strolled along the restored prairie: â€śI donâ€™t consider myself the owner of this land, I consider myself the caretaker for the future generations.â€ť

What did I learn on my summer vacation? The landâ€™s stories persist long after weâ€™ve forgotten our own.