The Sunchoke Is A Terrific Tuber To Forage

Though known by a few different names, including Jerusalem artichoke, the tuberous root of a sunchoke makes a sweet, delicious addition to the forager's table. 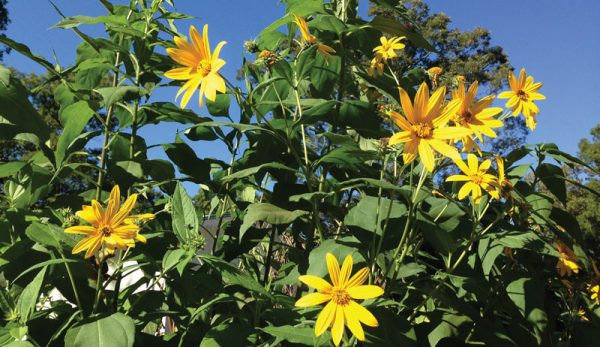 A wild, edible North American plant that most people know as Jerusalem artichoke is not an artichoke at all. And it didnâ€™t come from Jerusalem. The odd name comes from a story of miscommunication thatâ€™s too long and boring to relate here.Â

To get around that silly name some foodie came up â€śsunchokeâ€ť because the plant is in the sunflower family. It still begs the question: Why would any sane person christen any food with the name â€śchoke?â€ť

Professional forager Sam Thayer prefers the name sunroot. And given that the Latin name is Helianthus tuberosus, which means â€śtuberous sunflower,â€ť sunroot seems like the right way to go so Iâ€™ll stick with that. Mostly.Â

Nonetheless, sunchoke, as a name, is still much better than the undeserved middle-school-mentality name of â€śfartichoke.â€ť If you harvest the tubers of this plant too early, yes, youâ€™ll get gasâ€”enough perhaps to make others choke!

But a smart forager will wait for frost to thoroughly kill the top of the sunchoke plant to avoid that flatulent faux pas. If you harvest the tubers after that severe change in the weather, you wonâ€™t be digging up fartichokes. Instead youâ€™ll be digging up a paleo crop that provided much of the healthy carbohydrates for those original locavores, the Native Americans.Â

Interestingly, sunroot starch has a sweet flavor, yet evolved in a form that diabetics can safely eat. The tubers are delicious raw and are crispy as water chestnuts.

Donâ€™t make the mistake of preparing them like potatoes as some recommend. They make a good pickle or can be steamed or roasted whole and sliced to serve as a side dish. If you donâ€™t have a root cellar, the tubers can stay in the ground through winter or you can store them in a plastic bag in the fridge for several months.Â

Sunrootsâ€™ striking yellow flowers bloom in early fall on 8- to 10-foot tall, hairy stems. Youâ€™ll find them growing wild in sunny fields and at the edge of forests where they spread and shade out other plants.

Be aware that other similar but inedible wild perennial sunflower species finish blooming in late summer before sunroots have begun. They also all have smooth stems as opposed to the sunrootsâ€™ hairy ones.Â

Take note of the location while the sunroots are blooming and then come back after a hard frost has killed the tops. The sandpapery hairs on the stems will still be there to reveal this plant’s secret identity.

Bring a shovel to dig them and a bucket to carry them in. The tubers will be plentiful.

Foraging isnâ€™t the only way to gather sunroots. We can do as the Native Americans did and plant them as a crop. Oikos Tree Nursery sells cultivated varieties of sunroots and other fascinating native crops online.

But since they spread, I contain my sunroots in large plastic nursery containers (10- to 20-gallon pots) scavenged from landscapers. Fill them with garden soil but no fertilizer. Mulch the pot and keep it watered during dry spells.

To keep these top-heavy plants from tipping over their pot in a strong wind, I snip a few inches off the top when theyâ€™re a foot tall to force them into a shorter, bushier shape.

After the stems of the plant have been killed by a hard frost (which is not necessarily the first frost) cut your sunroots to the ground. Then dump out the entire pot onto a tarp.

Gather all the sunchoke tubers except for one or two that get tossed back in with all the soil to grow next yearâ€™s crop.

This article originally appeared in the January/February 2021 issue of Hobby FarmsÂ magazine.