In this final installment on livestock surgery, we learn about on-farm ruminant C-sections and how farmers and others can help. 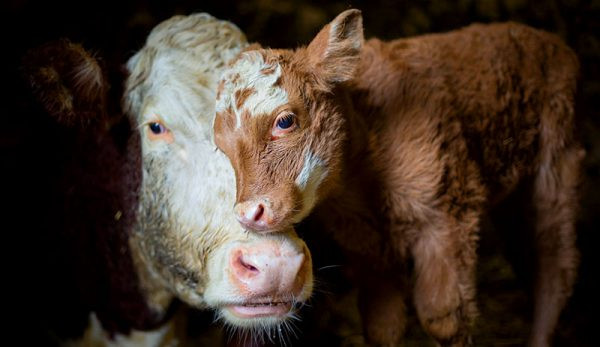 In our final installment in a series about farm animal surgeries, we consider obstetrical procedures, just in time for the spring birthing season. Here’s a closer look at ruminant C-sections on the farm.

Sometimes, when a fetus is too large, too backward or too twisted to be delivered vaginally, surgery is required. This is for the safety of the mother and as a last attempt to deliver a live baby.

Cattle, sheep and goats most commonly have C-sections on the farm. If a C-section is needed on a horse, because of the physiology of the placenta and the severity of potential complications, the mare should be referred to a large animal surgical clinic.

So what’s needed for an on-farm ruminant C-section? Let’s look at cattle first.

Typically, this procedure is done with the cow standing, preferably in a head catch or chute to restrict her movement. The incision site is shaved and her skin is scrubbed with antiseptic.

A local anesthetic is injected into a vertical incision on her side, and the vet will don long sterile surgical sleeves. Veterinarians avoid performing bovine C-sections with the animal laying down as this is hard on the cow’s respiratory system.

Additionally, the incision is made through the side of the abdomen, not the under part of the belly. Incisions made up the side heal much better and have less physical stress because of gravity.

Once a vet makes the incision through the abdominal wall, the large uterus containing the calf (or calves) is easy to find. It’s up to the vet to lift the uterus a bit toward the incision to see the proper place to cut. The uterus has some large blood vessels that should be avoided.

Plus, it’s dark inside a cow, so it’s easier when things are lifted up into proper light. This seems simple but can be pretty difficult. A cow’s abdominal organs are heavy and slippery.

After the incision into the uterus is made, amniotic fluid comes out and the vet can get an immediate look at the fetus (very soon to be calf). This is where the farmer can help, as it requires extra hands to help pull the calf from the uterus. Hands, however, (typically the vet’s) must also still hold onto the sides of the uterus.

Once the calf is pulled out, it should be shaken with its head toward the ground. This somewhat mimics the action of being squeezed through the birth canal, which squeezes fluid from the calf’s upper respiratory system, clearing its nostrils for its first breath.

Then, the calf can be laid gently onto some straw. Depending on the cow’s demeanor and her previous experiences with calving, the farmer might choose to place the calf near the cow’s head so she can smell and lick it.

If it’s a cold day, the farmer might help dry the calf. While this happens, the vet has the task of sewing up the uterus and the body wall. Once this is done and the cow is washed, she can be released to care for her calf.

For ruminant C-sections with no complications, the cow probably won’t need post-op antibiotics. The vet might prescribe medication, however, if the surgery was complicated. Same if the calf was dead and there was potential contamination of the abdomen.

What about small ruminants? The surgical steps are the same as for a cow. But with a smaller animal, a few bales of straw can be pushed together to craft a makeshift table.

The vet will lay the ewe or doe on her side instead of standing.

Twins and triplets are more common in small ruminants. It’s always helpful in this situation to have as many helpers on hand as possible to catch kids or lambs as they are pulled out.

It’s a great family experience to have siblings and parents all swinging around newborn lambs. Everyone gets to hear their baas for the first time.

Aftercare with ruminant C-sections consists mostly of watching the surgical incision for signs of infection (redness, heat, swelling, pain or foul-smelling discharge) and making sure the mother is making milk and her offspring are nursing as they should.

And of course make sure to bask in the glow of newborns on the farm and a job well done by all.