2 Common Surgeries for Livestock on the Farm

Many surgical procedures can be done on the farm. In part one of this series, here are some common surgeries your animals might encounter. 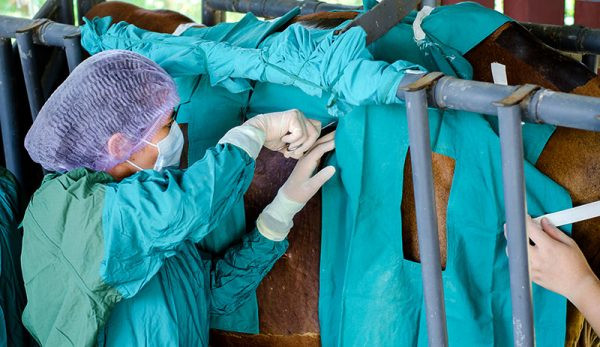 Last month we discussed the concept of livestock surgery on the farm. This month, let’s take a look at a few common on-farm surgical procedures.

Perhaps the most common livestock surgery done on the farm is castration. Done in every farm species except poultry (whose reproductive parts are on the inside), this is a relatively quick procedure typically done before the male animal reaches sexual maturity. However, considerable species differences exist in method, dictated by differing anatomy and industry standards.

One aspect that people find surprising? In most farm animals, the surgical incision is left open to drain instead of stitched closed, like it is with dogs. Some minor drainage at the incision site for a few days after surgery helps prevent uncomfortable swelling that could lead to infection.

For some farm animals, such as calves, piglets, lambs and kids, no sedation is typically used. The animals are awake during the procedure. However, most veterinarians use a local anesthetic to block pain at the incision site. When castration is done at a young age, blood vessels are small, and there is minimal bleeding.

Horses, however, are different. Their blood vessels are larger, and for the safety of the animal as well as the surgeon, equines are castrated either under heavy sedation while the horse is standing, or under general anesthesia with the horse lying on the ground.

For anyone planning on a farm animal castration this spring, make sure your vet can work in a large, open, clean area. If you use a chute for cattle, light it well and corral the animals for a period of time after the surgery to monitor for any excessive post-operative bleeding.

After surgery, keep the animal fairly quiet, but allow him to walk around. This helps decrease swelling and encourages the wound to drain. Drainage is bloody at first but should progress to a serum-like appearance. If you see pus or smell anything noxious from the incision, call your vet, as these are indications of infection.

As any cattle farmer will tell you, cows are an amazing species. The ruminant digestive system is a profound evolutionarily designed microcosm of billions of networking symbiotic bacteria and fungi that help digest and utilize mere grass as nourishment for a creature that weighs 1,000 pounds. Most of the time it worksâ€”and works well. Sometimes, however, particularly in high producing dairy cows with extreme dietary demands and metabolic stress, things go awry. The system gets twistedâ€”literally.

A condition called left displaced abomasum, or LDA, occurs when the cow’s fourth stomach, the abomasum, becomes abnormally filled with gas. Then, like a balloon, it rises from the floor of the abdomen and turns to the left side of the cowâ€”thus “left displaced.”

This displacement, as you might imagine, impinges on digestion. The cow’s milk production drops, she stops eating, and without remedy of the problem, she becomes very sick. But, in many uncomplicated cases, we can fix this surgically within about an hour. How? We go right in with some livestock surgery.

With the cow standing, we shave her right flank then put a local anesthetic under the skin. After that takes effect, we make a vertical incision into her abdominal cavity. With no major blood vessels in the way, there’s very little blood.

With the surgeon appropriately scrubbed and gowned with full-length surgical sleeves up to the shoulder, she reaches into the cow’s abdomen and around to the left side, feeling for something the size of a basketball: the inflated and displaced abomasum.

Once she finds that, she takes a large needle with tubing. She then pierces the abomasum to draw off the excess gas. Once deflated, the vet can pull the organ down and around to the correct location once again. She then permanently attaches it to the right side of the cow with sutures. This prevents an LDA from happening again.

Once that’s done, the patient gets stitched up. Depending on any other complicating factors and the animal’s health, it might receive IV fluids, oral fluids or, occasionally, an antibiotic. Very frequently, the patient walks away and within a few hours munches hay, feeling much better with a corrected digestive system.

Next month, as breeding season draws to a close, we’ll discuss the most common on-farm birthing-related surgery: the C-section.