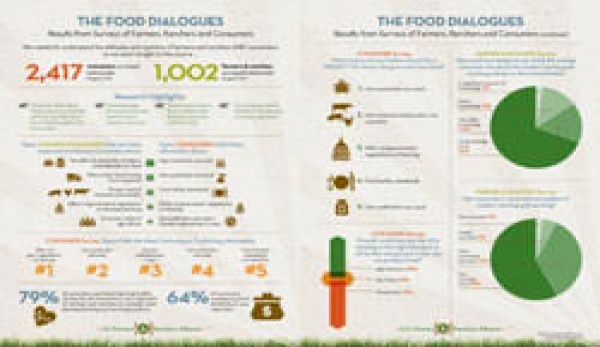 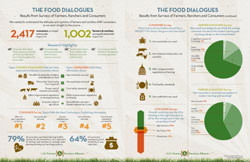 Results from surveys of farmers, ranchers and consumers.

Last week, the findings of two national food production surveys were released during “The Food Dialogues,” a town hall-style discussion presented by U.S. Farmers & Ranchers Alliance. The surveys, conducted by phone by Ketchum Global Research Network and Braun Research in August, 2011, focused on the opinions, attitudes and questions consumers and farmers/ranchers have about the current and future state of how food is grown and raised in the United States.

Results reveal that lack of access to information, as well as no interest or passion for the topic, have divided consumer opinion on the direction of agriculture.

“Americans have a lot of questions about where their food comes from, how it is raised and if it is good for their health long-term,” says Bob Stallman, chairman of USFRA and president of the American Farm Bureau Federation. “USFRA commissioned two separate surveys to first ask farmers and ranchers what they wished Americans could have more information about where their food comes from. We then asked consumers what questions they have on the same topic. The findings of both surveys indicate there is an opportunity for more dialogue between farmers, ranchers and the American public about how food is grown and raised in the U.S.”

The results of both surveys were shared and discussed during The Food Dialogues, which took place last Thursday in four U.S. cities and online via Facebook and www.fooddialogues.com.

Highlights of the research include:

The survey revealed that consumers have become disconnected from their food, yet think about the subject regularly. Consumer survey highlights include:

The purpose of the consumer survey was to ask Americans what additional information, in relation to how food is grown and raised in the U.S., they would like to learn more about. The top five topics that drew the most interest include:

The goal of the farmer/rancher survey was to identify topics that farmers and ranchers wished Americans had more information about when it comes to food and how it is grown and raised in the U.S. According to the survey, farmers and ranchers said the top misconception they need to overcome as an industry is that a few “bad actors” are representative of the entire industry. Additionally, farmers and ranchers identified the effect of pesticides, antibiotics and fertilizers on food as the most important priorities they should address when communicating with consumers. Farmer/Rancher Survey Highlights include: