Until I met her, I hadn't cared much for pigs. Now I'm crazy about Charlotte. 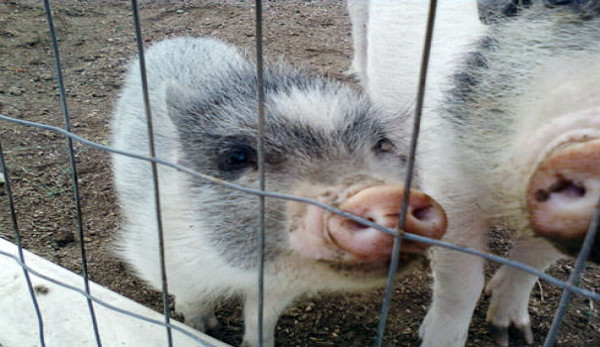 My new friend, Charlotte, isĀ the cutest piglet in the world.

Over the summer, I wrote about a cute little pig I dubbed Petunia, who lives in a neighborhood yard. Well, the other day, whileĀ riding Milagro around the neighborhood with my friend Michelle, I rode by Petuniaās house to say hello to her. I nearly fell off my horse when I saw the latest edition to the yard. I thought Petunia was the cutest pig Iād ever seenāuntil now. A new piglet, even smaller and cuter, was following Petunia around like a puppy.

I immediately named her Charlotte, from Charlotteās Web, even though Charlotte is actually a spider in the book and not a pig. It just seemed fitting.

I called to Charlotte, and she oinked at me, trotting to the fence, Petunia in tow. As the two pigs reached their snouts through the fence, I could barely contain myself. The cuteness factor was nearly unbearable! I jumped off my horse so I could make contact.

Charlotteās flat little nose poked through the fence at my fingers as I cooed to her. Milagro stood obediently next to me as I crouched down so I could get closer to Charlotte. Never one to miss a chance to get a good look at a strange creature (once he has determined the creature wonāt eat him, that is), Milagro put his head down to sniff the little pigs.

Charlotte, Petunia and I hung out together for a good five minutes while Michelle, mounted on her horse, sat there and grinned. I guess she had never seen me go gaga like that over any creature, let alone a little gray-and-white piglet. She seemed duly amused.

I wasnāt the only one who couldnāt get enough of this encounter. Charlotte strained against the wrought iron fence trying to get close to me. I reached past her wet snout and rubbed the top of her head. Her hair was sparse and coarseāa real shock to the senses when you are used to petting soft critters, like cats, dogs and horses. I also got a good look at her little cloven hooves. I donāt have any pets with cloven hooves, so these two-pronged tootsies are quite the novelty for me.

I could have stayed at that fence for an hour, bonding even deeper with little Charlotte. But alas, Michelle and I were supposed to be going on a trail ride, not a pig petting expedition. I wished little Charlotte a good afternoon and mounted Milagro. As we rode off, Charlotte and Petunia trotted back to the middle of the yard to continue what they were doing before we showed up.

Since then, I make it a point to ride by that house so I can spy these cute little piggies. I still canāt believe Iāve fallen in love with a couple of oinkers. Iād never been one for pigs until now. Makes me wish I had a lot more space on my urban farm so I could add a couple of these adorable porcines to the family.