Photo by Rick Gush Sweet corn is sold packaged in Tuscany, Italy. Sweet corn might just be the most American of all the vegetables, because Americans eat more of it than just about anyone else. Oh sure, corn is grown all over the planet these days, but most of that corn is either grown to […] 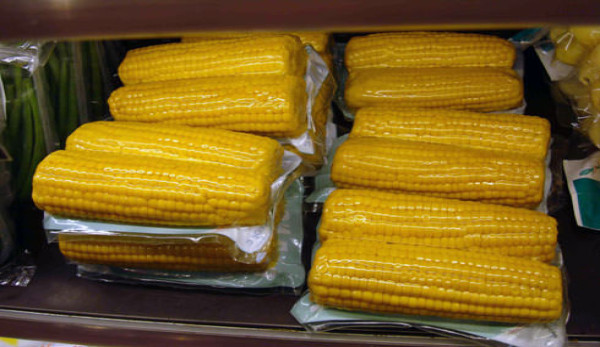 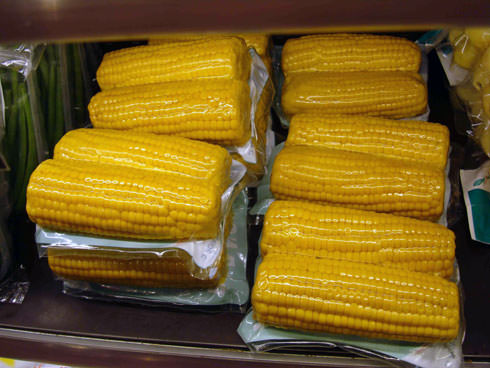 Sweet corn might just be the most American of all the vegetables, because Americans eat more of it than just about anyone else. Oh sure, corn is grown all over the planet these days, but most of that corn is either grown to make corn meal or it’s grown for processing plants that make syrups and the like. Throwing ears of corn into a pot of boiling water and eating them a few minutes later is a pretty American ritual.

Here in Italy, it drives me crazy that sweet corn doesnâ€™t show up in the vegetable markets anywhere but in Tuscany. The rest of Italy eats corn in the form of polenta, which is like corn-meal pudding.

The forms of corn on the cob that show up every once in a while are these packages of precooked ears shown in todayâ€™s photo. Sometimes, the corn in packages comes from Israel, and other times, from Spain. Odd, but the health-food stores around here all recently received big deliveries of this packaged stuff, so my wife brought home a few for me. I ate two ears last week, and while the experience was mildly pleasurable, it was nothing like the joy of eating a freshly cooked ear.

I am going to try to grow more corn this year. Maybe I can find space for two-dozen plants. I will admit that my favorite way to eat ears of corn is to wolf them down raw while Iâ€™m still standing in the vegetable garden. If itâ€™s good, ripe, sweet corn, it doesnâ€™t really even need the boiling, the butter or the salt and pepper.

One of the problems in growing sweet corn here is the fact that no named varieties of sweet corn are sold. I can find, when I look hard, seed packets labeled mais dolce (sweet corn), but there are no Silver Queens or bantams to be found. I donâ€™t come back to the states frequently, but when I do, buying a supply of sweet corn seed is always high on my list of required stateside activities. In the other years, I beg my American friends and relatives to send me seeds and I swap seeds with a few folks I meet through my writings.

The old story of how the natives taught the Pilgrims to bury a fish under each corn plant is probably the most famous garden lesson of all time. I bury stuff under each one of my own corn plants, even if itâ€™s more likely to be manure or hoof and horn than a fish. I suppose if I looked around a bit I could find a fish market that would let me have some past-prime fish, and Iâ€™m sure it would be dynamite fertilizer. Back when I used to do a lot of bonsai, I often mixed ground-up dried sardines into the potting soil, which was a trick I learned from a Japanese nurseryman when I was a kid.