Sweet Potatoes and Yams: How Are They Different?

If you enjoy a sweet, orange vegetable side-dish at Thanksgiving, you're probably eating sweet potatoes and not yams, no matter what your family calls it. 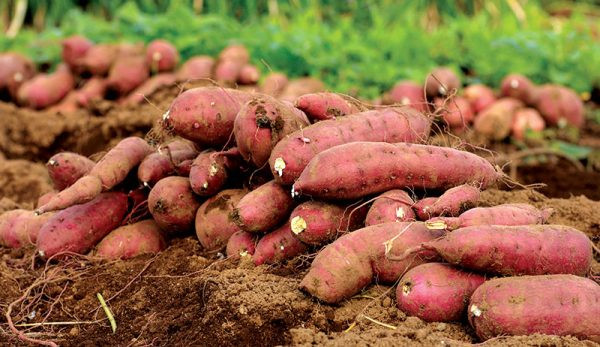 Thanksgiving approaches, and, like many of you, I have multiple meals to attend to, including a family gathering. This year my mother announced that she has decided to leave sweet potatoes off the menu. Any alteration to holiday fare is potentially dangerous in my family. Iām pretty set in my ways when it comes to our traditions, but when I considered this change I realized I could just have my own candied sweet potatoes here at home to make up for it. How did the sweet potato become so important, anyway? And what does your family call it?Ā

Some families call their orange side dish ācandied yamsā and some simply say āsweet potato casserole.” There are mashed, fried and baked sweet potato dishes as well as sweet potato pie, muffins, cake and ice cream. One thing is for sure, it will be on most every Thanksgiving table ā¦ except mine ā¦ but Iām not bitter.

I am a stickler that we call it a sweet potato. It appears that the confusion began during the early days in our country. The enslaved African people had come from a homeland where true yams grow. There, the yam was not just about sweetness and marshmallows. Instead, the yam had immense cultural importance. Yams were involved in marriage negotiations and harvest celebrations. Today, Nigeria is the largest producer of yams and holds a yam festival yearly. Perhaps there is a connection to our Thanksgiving here. It is said that the African slaves, upon seeing the sweet potato in the South, reminded them of their yam from home. If that is true, the sweet potato would have been an important connection to their culture and not merely a familiar food.

Each year during Nigeria’s yam festival, people offer some of the tuber to their ancestors before sharing it with attendees. This is done to give thanks for the harvest and for the blessings allowed to the living community. It would be no coincidence in my mind, then, that the South brought forth sweet potato pie and candied āyamsā as part of the Thanksgiving tradition.

Yams and sweet potatoes are from two very different families. There are eight species of yam in the Dioscorea genus and really only one species of sweet potato in the morning glory genus of Ipomoea that is worth eating. Yams and sweet potatoes carry fairly similar nutritional profiles, with sweet potatoes enjoying a much higher beta-carotene content. Yams wonāt grow here in the United States and are available primarily in ethnic markets. The USDA added to this confusion by calling the orange sweet potatoes “yam” to differentiate between the light and dark varieties of the tubers. If department officials were trying to be more true to the yam, they would have called the lighter varieties by the name, not the orange. Yams are almost all universally light in color, with the exception of the purple yam that grows primarily in China.

Neither plant is a native to the United States, but sweet potatoes are rather easy to grow in our climate. If you buy an organic variety for Thanksgiving, you might can even grow your own āslipā or plant from it. You can cut off the eyes just like you would from a potato and secure them partly submerged in a glass of water. This slip, when planted out next spring in full sun and well-drained soil, can produce many more sweet potatoes for next yearās table.

If you sit down to Thanksgiving to enjoy a sweet, orange vegetable side-dish, itās a fair bet you are eating a sweet potato and not a yam, regardless of what your family calls it. Itās a fun thought for me to ponder the origins of this tradition. Are we enjoying yet another food, like okra, that made its way onto the American plate because of an enslaved people whose voice we thought had been silenced?Ā