Courtesy Tai Dinnan Thanks to the volunteers at the Somerville Maple Syrup Project, children in Somerville, Mass., can learn how real maple syrup is made. A couple of weeks ago, in Somerville, Mass., my friends and I walked single file down what was left of the sidewalks and crossed the city streets through cuts in […] 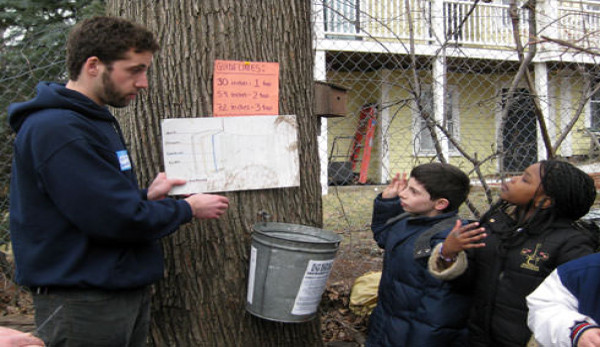 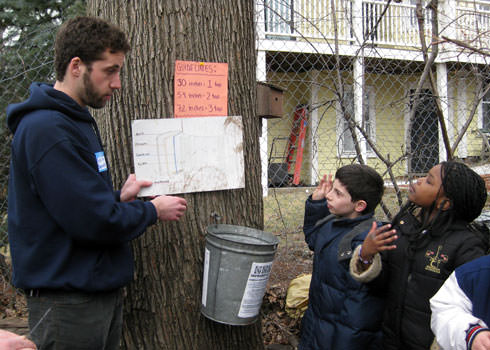 Thanks to the volunteers at the Somerville Maple Syrup Project, children in Somerville, Mass., can learn how real maple syrup is made.

A couple of weeks ago, in Somerville, Mass., my friends and I walked single file down what was left of the sidewalks and crossed the city streets through cuts in the snow banks, which sometimes hid neglected bicycles with only their brake cables visible. We were headed for a lively winter farmersā market in a former armory. It seemsĀ winter markets yield not only plentiful eating ideas but also information about terrific community efforts.
Ā
AtĀ theĀ market,Ā we learned about the Somerville Maple Syrup Project, through which maple syrup is made by tapping urban trees. It brings together community organizations, public schools and the Somerville Community Growing Center (a site for both environmental education and cultural performances in Somerville) to tap and collect sap from the sugar maple trees on the Tufts University campus and in volunteer backyards. A four- to six-week curriculum for second- and third-graders in nearby schools accompanies the tapping, and high school students both maintain the wood stove and built the evaporator pans in metal shop. The project also gives four free “maple education sessionsā on Saturdays in February at the main branch of the Somerville Library.

Each year, the project ends with a big Maple Boil Down Festival (the weekend of March 5 this year) and a pancake breakfast at the Growing Center. The syrup is sold as well at the city’sĀ Union Square Farmers Market. Through this collaboration between city government, schools, and local nonprofit and community agencies, kids who think maple-flavored pancake syrup comes only in a plastic bottle can experience the historic process and the woodsy, much more nutritious flavors of maple syrup as everyone comes together to produce food from an urban landscape.

Volunteers collect sap daily throughout the month of February, help teach local residentsāespecially childrenāabout maple sugaring, and man the weekend-long boil down. Forty gallons of sap are needed for 1 gallon of syrup. Watching the syrup-makingĀ process in real time can help everyone appreciate the patience and work necessary to harvest such a precious and delicious crop.

Of course, maple syrup cries out for its partner pancakes (or waffles), but you might also try a maple-walnut pie (similar to pecan pie) or substitute maple syrup for sugar in a flan or pudding and for the caramel in crĆØme caramel. Another option for maple-syrup use is easy baked apples. To make them, core the apples and fill the hole with maple syrup, cinnamon, and maybe raisins, walnuts or both. Then bake them at 350 degrees F until the apples are soft.

Hereās recipe for another perfect winter dessert, Indian pudding, made with maple syrup instead of the more traditional molasses. Youāll see that itās a New England version of polenta and the Southās version ofĀ cornmeal mush, fancied up with sweetener and eggs. If you can find some Rhode Island flint cornmeal, itāll take longer to cook, but the dessert will be even more New England-y. Use local eggs, milk and butter if you can, too.

In a large saucepan, bring milk to a simmer. Reduce heat, and stir in maple syrup until it dissolves. Carefully sprinkle in the cornmeal, whisking to avoid lumps. Cook, stirring constantly, until the mixture thickens considerably. Add raisins and/or apple, if using. Add butter, salt and spices while stirring well. Remove from heat, and let cool 5 minutes. Whisk eggs into the milk mixture until well combined.