Succeeding in the garden now requires a more localized approach as hardiness zones shift under the effect of climate change. 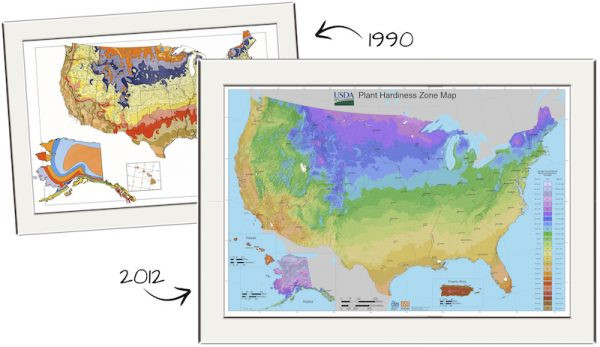 Gardening has always had its challenges.

We’ve all battled deer, rabbits and other nibbling critters. Most of us have had to contend with smaller pests like aphids, flea beetles and powdery mildew, too.

But add in climate change, and growing almost anything has become more complicated. An increase in the frequency of extreme weather events is partly to blame.

Based in Indiana, Amy Thompson is director of Monroe County Purdue Extension and she has long coordinated the Monroe County Master Gardener Association.

â€śOne thing that climate change is bringingâ€”wetter springs and more intense storm events,â€ť Thompson says. â€śThe predictability has sort of gone out of things, so the new normal is volatility.â€ť

I’ve noticed that I’m having to relearn and rethink my usual gardening practices. For instance, those tried-and-true hardiness zone maps on the backs of my seed packets no longer seem to hold up. In general, U.S. hardiness zones have been moving northward.

â€śThe range of areas where plants grow is going to shift over time,â€ť Thompson says. â€śThe zone map has already shifted, so things that might normally have grown well [in Indiana] may now grow in southern Michigan.â€ť

Thompson adds, â€śIn the fall, our frost dates have shifted about two weeks back. They haven’t necessarily updated all the maps to indicate that, but, over the last decade, they have shifted…. So, maybe growing more in the fall might be an option for people.â€ť

One of the first hardiness zone maps was published in 1936 in the United States Department of Agriculture’s Atlas of American Agriculture. Its zones represented average annual minimum temperatures recorded by the U.S. Weather Bureau between 1895 and 1935.

Even so, between 1990 and 2012, hardiness zones moved to the north by half a zone, and they traveled at a rate of 13 miles per decade, according to a YaleEnvironment360 report.

Researchers suggest we can expect such northward zone movement to continue with the effects of global warming at a â€śclimate velocityâ€ť of 13.3 miles per decade between 2041 and 2070.

So, if the hardiness zone map isn’t as reliable as it used to beâ€”or if it will become increasingly less reliable over timeâ€”what’s a gardener to do? Pay closer attention to microclimates.

Features specific to your immediate surroundings can influence the growing conditions on your land significantly.

Say you live in a rural area with plenty of trees and green space. Your area temperatures may be slightly cooler then those in a nearby city that’s mostly block after block of heat-trapping asphalt.

The amount of tree cover as well as proximity to bodies of water also contribute to your microclimate.

To get a more accurate representation of your hyperlocal hardiness zone, consider keeping a garden journal. You can make notes about which plant varieties are thriving, which aren’t, where each is located, and how you’ve cared for them.

You can also include notes about periods of extreme heat, cold, rain, or drought for future reference.

By studying your plant varieties’ preferred growing conditions and then carefully comparing their actual performance in your own garden, you may be able to determine which spots on your property are extra hot or cold, which are dry, which are moist, and so on.

With this information, you can sketch a map of your own microclimate and use this to inform your choices about which plant varieties are most likely to thriveâ€”and precisely where.

â€śThe seed companies have definitely recognized that climate change is an issue and they are working to develop varieties that can tolerate more drought conditions or maybe have a higher cold tolerance,â€ť Thompson adds.

â€śHopefully the development of those varieties can keep up as our climate does change.â€ť

Besides specialty seed varieties, gardeners may increasingly need to rely on mulch and extras like row cover to manage the changes that come with climate change.

â€śMarket farmers have structures to help retain heat in winter or they’ll put shade cloth over their greens to keep them cooler,â€ť Thompson concludes. â€śA lot of our commercial farmers are already looking at technology to help them grow.â€ť