It Takes A Virtual Village To Save A Bus Stop Rooster

Roosters are contraband within Portland city limits, but that didn't stop residents from swooping in and saving one in the midst of Oregon's coldest winter in years. 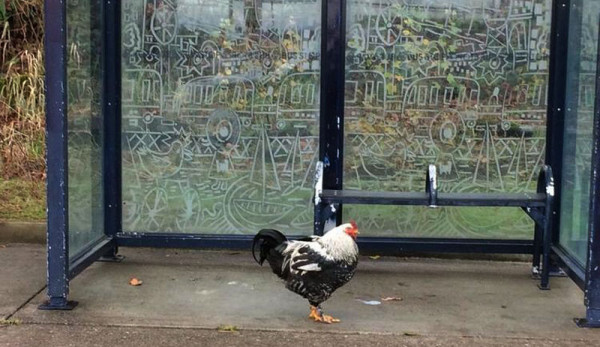 No one knew exactly when the rooster arrived at the bus stop by the four-lane freeway in Linnton, Oregon, but it was speculated that at one point he had quite literally crossed the proverbial road, somehow escaping what would have been a grueling death beneath one of the 18-wheelers common to this North Portland stretch.

The Linnton Rooster, as they called him, first appeared on my radar in early December, when someone on Nextdoor, a community app that operates like a hyper-local Craigslist for neighboring locales, published a quick note of concern about him.

“There is a loose rooster around the bus stop across from the Linnton Community Center. Does anyone know who to call to save him from being hit by a car?”

This initial post was met with virtual shrugs, as Portland residents aren’t technically allowed to house roosters. The city’s website lists pigs (save for the miniature pot-bellied variety) and roosters as animals that are not allowed within city limits.

That is not to say there are no roosters in Portlandâ€”but if you choose to keep one, you’re largely at the mercy of your neighbors. If they don’t mind a natural (and loud) alarm clock next door, you’re in the clear, but if not, you’ll have to find someone like my Portland acupuncturist, Donna Stewart, who has kept a small flock of hens for over a decade, and is sometimes called upon to help neighbors with unwanted roosters.

“I carefully put problem birds in the freezer,” she tells me. “Only nice birds get to live in my yard. All roosters have an expiration date due to crowing, though. You can only ask neighbors to hang in there for so long.”

Over the years, three unwanted neighborhood roosters have found themselves in Donna’s freezer. “Generally, people are attached to their birds as pets, and if they can place the animal where it will continue to live, that is their preference.”

But finding a forever home for contraband livestock can be a challenge. Local animal sanctuaries that used to take roosters no longer accept them, and the huge surge in home poultry husbandry in recent years brought about an increase in the demand for sexed birds, and the increased number of wrongly sexed birds that comes with it.

“Lots of families looking for layer hens discovered they were sold roosters,” Â Donna says. “When those roosters started crowing, soft-hearted families sought to rehome the birds somewhere they could live out their old age surrounded by harems of adoring hens and rolling farmland, eagerly greeting the day with a hearty crow from atop a picturesque fencepost. For the number of roosters that ended up in urban homes, this was just not a reasonable fantasy.”

On December 22, 2016, in the midst of the iciest winter Portland had seen in almost a decade, a second post about the Linnton rooster appeared on Nextdoor titled “Rooster Still Alive”:

“The rooster at the Linnton Bus Stop made it through the snow and ice we had. Comes real close to me. Even talks. Wish someone knew [a home] to place it in.”

Unlike the first post, this one moved people to action. “I would be willing to give him a home if someone can catch him!” remarked Darlene [last name withheld at her request], a Linnton resident.

“I love that he is free!” “Should he stay free?” commented other Linnton residents.

“He would be free at my house, but with protection and shelter,” she replied. “Better than a bus stop!”

The thread had comments over the 100 mark when I caught up with it, and over the next few days, people reported rooster sightings and feedings, and some attempted to capture him for Darlene. They came alone or in pairs, and each time they were outwitted by the wily rooster.

At this point, I had started reading rooster updates to my husband, Mike McCaffrey, and encouraged him to download the Nextdoor app so he could keep up with the â€śvery Portlandâ€ť rooster saga himself. Mike has been a vegetarian and animal advocate since his teens and has a particular soft spot for roosters since so many are systematically killed. Discussions with him about the plight of roosters in America often end in anger or tears. A few days later, he removed Nextdoor from his phone, proclaiming that the rooster updates were stressing him out. (He then proceeded to snatch my phone from me multiple times a day, apparently unable to completely quit the drama.)

On January 4, 2017, temperatures were expected to drop to 18 degrees come nightfall, and all Mike could talk about was the rooster.

“I’m going to the hardware store,” he announced as he made to leave our house midday, and when I asked to come too, he confessed that he had plans to buy a net and bring home the rooster.

Understand, I had not planned to have a role in the Linnton roosterâ€™s story outside that of worried bystander, but I knew if anyone had a chance of catching the thing, it was going to be my stubborn partner, who had wrangled backyard poultry in his youth. We drove to the hardware store, purchased a massive fishing net, and drove across the St. Johns bridge to Linnton.

We parked across the street, and Mike sprinted across the road to see if the rooster was to be foundâ€”and there he was, a magnificent specimen by any measure, nice and plump from food from his bus-stop fanbase.

Confirming this, Mike ran back, threw open the trunk of our vehicle and pulled the giant net out. I locked the car and followed him across the street with my camera. What happened next was something straight out of a cartoon: The slick chicken evading the 6-foot-3 dude, leading Mike around in circles. The rooster ran up the hill, and Mike pursued, and I worried they would both trip and fall given the ice on the ground. But then I saw the net come down with a thud, and Mike slowly made his way back, with one very confused rooster in tow.

“We got him!” I posted in the Linnton Rooster thread on Nextdoor. “Husband insisted on getting him out of this cold. Taking him to the feed store unless anyone else has a better idea!”

We crossed the road and walked up to the Linnton Feed & Seed store, where some had speculated the rooster had first escaped from months ago. Mike was a sight with his giant net and the rooster within it. “Now thatâ€™s not something we see every day,â€ť said a staffer, who asked to take a picture.

Our plan was to surrender the rooster to the feed store and alert the interested parties on Nextdoor, but Mike took one look at the little pet carriers stacked out front (most with surrendered roosters inside them) and refused to leave his prize there. “We are NOT keeping the rooster!” I yelled, and he insisted it would just be for the night since it was going to be so cold.

I drove us back over the St. Johns bridge with Mike in the passenger seat, the rooster (net-free) sitting silently in Mikeâ€™s lap. He was astonishingly well-behaved considering all that had transpired. Once home, Mike set him up inside a large dog crate inside the house, lining the bottom with hay and giving him the feed the store staffers had gifted us with.

As soon as we were home, I sent Darlene a message to ask if she still wanted the roosterâ€”who was now named William, at least according to Mike.

“Oh my gosh, thank you for catching him!” she texted me. “Trying to coordinate with my family members and all of the schedules to get down there during daylight hours wasnâ€™t working and he seemed to have somewhere that he roosted at night, so we couldnâ€™t find him after dark.”

We made plans to take him to her home the next day.

If youâ€™ve never had a rooster living indoors during the wee hours of the morn, I donâ€™t recommend it. William woke us bright and early, shrieking to announce the sun hours before it peeked through our windows. So, letâ€™s just say taking our guest to his new home sounded fantastic from where I lay. Mike, on the other hand, was having a very difficult time giving up his new friend, and it took much convincing to load both husband and rooster (back on said husbandâ€™s lap) into the car and over the bridge to Linnton.

Darlene was lovely, and showed us the side yard the rooster would have to himself, until she was able to get him a harem of hens in the spring. Her family owned a nicely sized plot of land without neighbors too closeby at the borders. Mike begged her to keep the bird someplace warm until the coldspell passed, and she graciously agreed. The rooster would take up residence in her indoor storage unit until the ice melted.

“What are you going to call him?” Mike asked, rolling down the car window to keep the conversation going as we began to pull out of her driveway.

“The kids want to call him ‘Chuckles,'” she said.

“Oh,” said Mike. “We were calling him William.”

The next day, Darlene added a comment to the now over 150 comments-deep thread, announcing that the rooster had settled in nicely and would be called William. She had also started an invite-only Facebook group for his fans to follow along on his adventures.

Today, William enjoys his freedom safely outdoors, and sometimes flies into the tree in his yard to take in the sights. He has taken to peeping through the windows of Darleneâ€™s home and communicating with her parrots and cats. A neighbor set up a donation box on his behalf at the Linnton Feed & Seed Store, so the locals can chip in for his keep.

“William continues to be a happy and welcome addition to our little family,” reads a recent update from Darlene on his Facebook fan page.

“The longer he’s here, the more I’ve become convinced that he was once someone’s pet. He prefers to hang out as close to the house, and the people, as he can. He’s a NICE rooster; he’s never aggressive or anxious around the dogs and he seems to want to meet the cockatoo. But most of all, he really seems to like people. He loves to be stroked and petted while he’s perched on his rail and he’s fine with being picked up.”

“It’s the year of the Rooster this year. I guess we’ve got ours, hopefully, he’ll bring us luck!”

We suspect that William, who has defied the odds most roosters face, would argue that he is the lucky one.