Farmers and officials in the Carolinas work together to combat witchweed, which is devastating the area's prime crops. 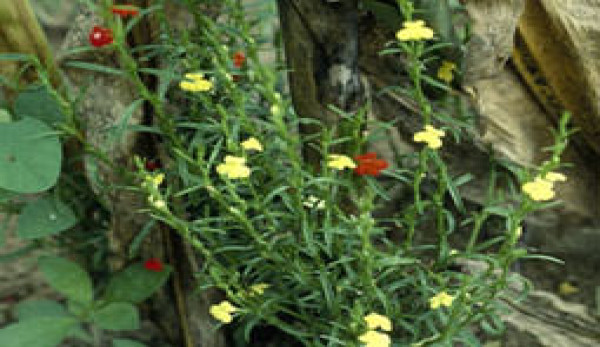 For the past 50 years, areas near the border between North and South Carolina have been ground zero for a fierce battle in the war against a devastating weed. Federal and state officials and local farmers have been fighting the only known U.S. infestations of witchweed (Striga asiatica), an invasive plant that has crippled key segments of the agricultural industry in countries around the globe.

The parasitic weed is a danger to some of our nationâ€™s most important crops, including corn, sorghum, sugar cane, rice and other plants belonging to the grass family. It taps directly into a plantâ€™s root system to rob it of nutrients and moistureâ€”dramatically reducing yields.

Unfortunately, witchweed also is very prolific. A single plant can produce as many as 50,000 dust-like seeds that can live in the soil for a decade or more, making eradication a tough and time-consuming process.

But for farmers battling the weed in North and South Carolina, the end seems tantalizingly close.

â€śWeâ€™re 99 percent of the way there,â€ť says Alan Tasker, national noxious weed program manager with the USDAâ€™s Animal and Plant Health Inspection Service. â€śNot only have we halted the spread of witchweed over the past five decades, but weâ€™ve dramatically reduced the number of infested acres, as wellâ€”down from 450,000 in the 1950s to about 2,000 today. Our goal is to eradicate it once and for all.â€ť

Witchweed is native to Africa, India, the Middle East and China. No one is sure how it made its way to the Carolinas. A graduate student from India first spotted the slender, red-blossomed pest in 1955. He knew it well because of its devastating impact on his own countryâ€™s sorghum crops.

To avert a similar disaster for U.S. growers, Congress created an eradication program in 1957 led by a USDA program that later became APHIS. The agency established a research station and farm where it developed the science-based control methods that have produced outstanding results. The successful program is built around three critical phases, each involving close collaboration among federal and state officials and farmers in the Carolinas:

1. Locate and map all witchweed infestations.
Because witchweed is so prolific, finding each and every specimen of the foot-tall plant is vital. In addition to farmers checking their own land, scouts are sent out to locate infested sites, traveling on foot and on horseback early in the program and later in all-terrain vehicles. There are penalties for failing to report the weed and bounties paid for sightings by eligible parties.

Â â€śWe typically have great cooperation from local farmers, who know the danger witchweed poses to their crops,â€ť Tasker says.

2. Quarantine areas with witchweed.
Although tiny witchweed seeds can be spread by wind or by water, human activity is often the culprit. For that reason, the areas where witchweed is found are quickly quarantined. Machinery used at the site and any crops harvested with soil attached must be cleaned thoroughly to remove witchweed seeds. Growing the grass crops favored by witchweed is strictly prohibited until the pest is totally eradicated in the quarantined segment of a field. Instead, farmers must leave the land fallow or convert to crops that are harvested well above the soil line.

3. Control witchweed.
Officials remove witchweed plants when theyâ€™re found and use both foliar-applied and soil-applied herbicides for deterrence. Destroying the tens of thousands of microscopic seeds that may already be in the soil, though, is tougher and more time-consuming. Some seeds sprout right away and are killed by the herbicide. But others can lurk for years.

â€śAllowing grassy weeds to grow in the area or planting a crop that is susceptible to witchweed can actually trigger dormant sends to germinate, even if they are deep underground,â€ť Tasker says. â€śWe have examples of parasitic weed seeds remaining dormant in a fallow field for 50 years and then sprouting as soon as the preferred host crop is planted.â€ť

One effective technique for controlling dormant seed is â€śsuicide germination.â€ť Ethylene gasâ€”a natural ripening agent produced by fruits, vegetables and flowersâ€”is injected into the soil and causes the seeds to sprout. Without a host plant to attach to, the new seedlings wither and die. Another approach is to fumigate the soil with chemicals to destroy any seeds that remain.Â

â€śRegardless of the technique used, we spot-check the fields for years afterwards to make certain the weed is truly eradicated,â€ť Tasker says.

Tasker and Jim Westwood of Virginia Tech have organized a special day-long symposium on the witchweed program and other parasitic weeds will take place during theÂ 51st annual meeting of the Weed Science Society of America. The event is scheduled for Feb. 7 to 10, 2011, in Portland, Ore.