The Los Angeles-based farmer tells us how he uses the local climate and his home environment to keep his crops growing all year round. 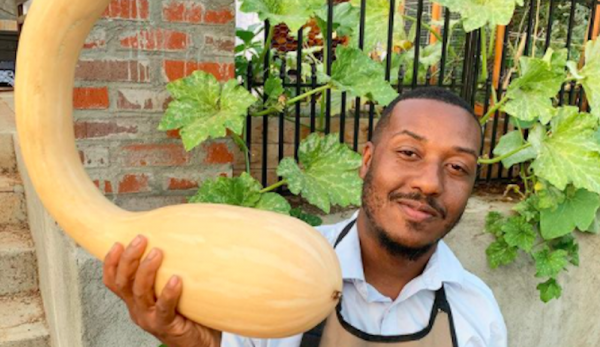 “I started gardening when I was about 5 years old with my grandmother and great-grandmother,” says the Los Angeles-based Kenneth Sparks. Sparks, who grows everything from cucamelons to oranges, has become popularly known as The Farmer Ken.

Back then, Sparks was living in Ohio, where his family grew cabbage, collard greens, mustard greens, corn, tomatoes and peppers from May to November. But since moving to Los Angeles six years ago, Sparks has been able to grow all year round via a series of levels on his terrace, along with fruit trees planted on a hill.

Sparks has also recently launched a fundraiser with the aim of starting a community garden.

We spoke to Sparks about his cucamelons and his burgeoning food forest. We also talked about his new technique of preserving dried flowers in resin.

“This year I am most proud of my fruit trees as a whole,” says Sparks when asked which of his crops have become the stars of 2020. “I planted a lot of them last year and a portion of them started producing this year. So it’s great to see them thriving already.”

Sparks adds that his food forest is situated on a hill and contains over 70 trees. “It mimics an actual food forest where you have taller trees and shorter trees and vines and shrubs and everything intertwines.”

Read more: You can build your own food forest with permaculture gardening!

Cucamelons have become a resilient part of Sparks’s garden this year. “They’re basically like a grape-sized cucumber,” he explains of the dinky vegetables. “They’re actually doing better in the cooler weather than the intense heat of the latter part of summer. When it cooled down in the fall, they really took off growing.”

“I’m in the city of Los Angeles and I have various growing techniques that I’m using because my property is terraced,” says Sparks, detailing his setup. “I have six or seven levels and it’s mostly concrete so I have to use planters and pots and raised bedsâ€”so my garden is a combination of everything.”

Read more: Make sure you check your drainage before planting fruit trees.

If you scroll through Sparks’s Instagram account, you’ll inevitably come across some distinctive images of dried flowers inside various shaped blocks of resin.

“I was just experimenting and trying to preserve some flowers and one of my friends suggested resin so I went ahead and tried,” explains Sparks. “I harvested some flowers, I dried them out and went ahead and put them in some molds and poured resin over them.

From Seed To Harvest

Sparks says that a big part of the fulfilling nature of growing crops and plants comes from getting to witness the complete process unfold before your own eyes.

“The most rewarding part for me is watching something grow from seed,” he explains. “You take care of it and then you get a harvest.”