New York City-based founder Sarah Hoffman tells us how she turned a hobby dabbling with sourdough into a community and wellness-focused bread business. 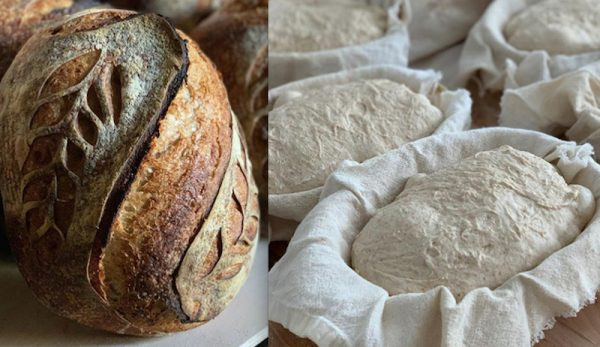 When Sarah Hoffman chanced across the Instagram account of baker Tara Jensen, it set in motion her own adventures into baking sourdough bread.

“Tara talked often about the rhythms of sourdough, about using it as a grounding practice, and I was immediately drawn in,” says Hoffman, who’s based in Queens, New York City, where she runs Phoenix Bakehouse.

After Hoffman snagged a spot at one of Jensen’s workshops in Asheville, North Carolina, she began to discover the nuances of baking sourdough breads.

“I learned quickly that sourdoughâ€”that is, bread thatâ€™s naturally leavened using a wild yeast cultureâ€”requires patience, it requires attention, and it requires self-kindness,” she recalls. “Commercial yeast allows you to bake bread quickly. But wild yeastâ€”which is everywhere: on your hands, in the air, in your flourâ€”is a slow little beast. The beauty of it is that the long fermentation required for it to rise breaks down the grainâ€”something that commercial yeast-leavened breads donâ€™t doâ€”and makes it more easily digestible.

“Plus it just tastes a hell of a lot better,” she adds.

Taking a moment away from her Phoenix Bakehouse duties, we spoke to Hoffman about the benefits of baking sourdough bread. We also discussed the best ways to repurpose your starter discard. And we got the scoop on how to name your starter.

The Origin of Phoenix Bakehouse

“I wouldnâ€™t say awful. But it wasnâ€™t the bread I dreamed of nor the bread I had made in North Carolina,” she recalls. “But I kept at it because even the worst loaves were delicious.”

Hoffman began to share her sourdough bread loaves with friends. And she kept hearing people telling her that they’d gladly pay for her bread.

“So I started offering loaves for sale and it grew and kept growing into what it is now,” she says.

Ready to start your own sourdough journey? Here’s what to do.

The Benefits of Sourdough

Hoffman says the most rewarding part of running Phoenix Bakehouse is being able to provide bread for people who normally might not be able to consume it. These include those who are gluten intolerant or suffering from diabetes.

“A customer whoâ€™s grown into a good friend developed gestational diabetes and spent a good bulk of the end of her pregnancy in the hospital,” Hoffman says. “Her husband brought her my bread and her blood sugar stayed level. She could eat it. It was a tiny bit of comfort in an uncomfortable and uncertain time for her.

“Now, a year and a half later, she tells me my sourdough is the only bread her twins will eat. Itâ€™s amazing! I grew up on white bread. These kids are growing up on sourdough.”

Should you bake your own bread? Yesâ€”here’s why.

The Importance of Naming Your Starter

When caring for your own sourdough starter, it’s traditional to name it.

In Hoffman’s case, her wheat starter is named Edith “because sheâ€™s heady like Edith Piaf and is just, well, hungry and wants to eat.”

“Sourdough can be such an unpredictable thing,” says Hoffman. “Because itâ€™s living and breathingâ€”a culture of wild yeast and lactobacteriaâ€”it will ultimately do what it wants.”

This means that oftentimes you have to embrace the bread’s independent streak and allow it to follow its own whims.

“Over time and with practice, you learn to listen to its rhythms, its wants and its needs and have a conversation with it,” explains Hoffman. “But even with that, youâ€™re bound to have an off-bake or an off-week or even an off-month.

“And thatâ€™s fine! Unless you make some truly hideous mistake that renders your bread inedible, it will still be bread. Itâ€™s still beautiful because itâ€™s a reflection of your work and your effort and your love.”

The Joys of Discard

But Hoffman’s baking goes beyond sourdough loaves. The discard that’s often thrown away when refreshing a starter can be turned into a range of other foodstuffs.

Hoffman recommends baking Swedish cinnamon knots and American cinnamon rolls if you favor sweeter treats. Or you can rustle up sourdough pizza dough to satiate your savory cravings.

Just don’t overthink your discard plans too much: “My absolute favorite thing to do with discard is to just throw it in another baked good. It gives amazing flavor and tenderness to cookies, scones and muffins and is great in pie crust, too.”