Next week will be Thanksgiving, and we can hardly wait! Mom makes treats for all of us animals and adds raisins and chopped apples to our food. Yum! 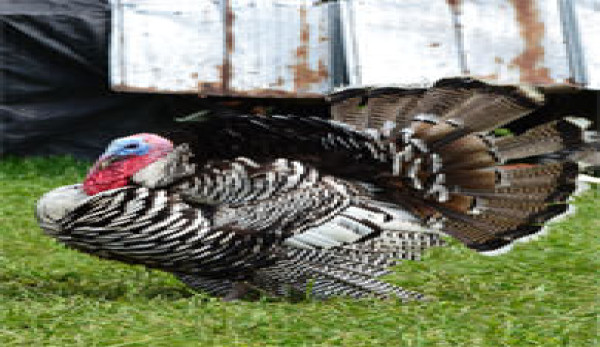 Next week will be Thanksgiving, and we can hardly wait! Mom makesÂ treats for all of us animals and adds raisins and chopped apples to our food. Yum!

Humans eat special yummy things on Thanksgiving, too. Most people chooseÂ turkey because it’s the traditional Thanksgiving feast. Our Mom and Dad are vegetarians, though, so they have to think outside the box. One year, they tried a Tofurky roast; it was good but not quite the real thing. Now they fix a turkey feast with all the trimmings except the turkey: lots of mushroom stuffing, mashed potatoes and gravy, green-bean casserole, homemade dinner rolls with rich butter, Jell-O, and pumpkin pie with real whipped cream. It’s so good that nobody misses the turkey.

If you’re preparing a turkey dinner for your Thanksgiving feast, Hobby Farms can help youÂ do it safely and show you how to makeÂ tasty turkey meals with theÂ leftovers after you’re done.

Turkeys are cool. We know that because Uzzi and I Googled turkeys last night. Here are some of the things we learned.

Want to read more fun and fantastic turkey facts? Visit the University of Illinois’ Turkey for Thanksgiving website, where you can also learn to choose, cook and carve your holiday bird. There’s even a page of holiday hotlines if you need help. Check it out!