Last Wednesday, when Dad came home from work, a hen was glaring at something moving across the yard. It was a tarantula! 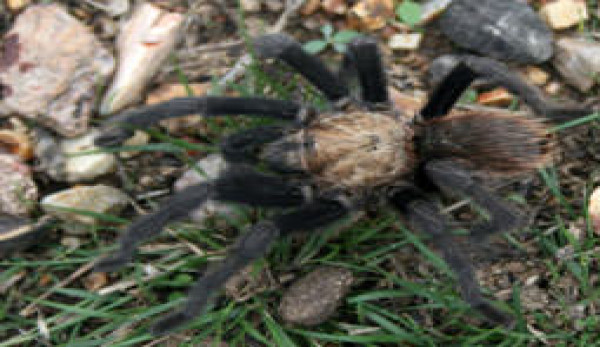 Last Wednesday, when Dad came home from work, aÂ hen was glaring at something moving across the yard. It was a tarantula! The hen wanted to eat it, but Dad said no. He caught it in his hat and carried it down to our woods to let it go.

It was a male Arkansas Chocolate tarantula, sometimes called a Texas Brown Tarantula, on walkabout seeking a mate. We see a lot of those this time of year. They arenâ€™t as huge as some American tarantulas, but Mom says theyâ€™re plenty big enough! Females average about 2 inches long, and males a little bigger than 1Â˝ inchesâ€”thatâ€™s just their bodies, not counting their legs. Mature male tarantulasâ€™ legs are quite a bit longer than femalesâ€™ legs, and males are the ones we usually see.

Females tarantulas mature when theyâ€™re roughly 11 years old, and unless something kills them, they live 20 years or more. Males mature between 7 and 10 years of age. The same year they mature, males walk long distances during the autumn months looking for girlfriends. Soon after that, mated or not, males die.

Arkansas Chocolate tarantulas prefer dry, rocky glades, where they live in silk-lined burrows in abandoned rodent or reptile tunnels. They plug their burrows for the winter months and come out again in spring. Sometimes tarantulas hunt at night, but they prefer to remain in their burrows waiting for prey to amble by. Crickets, beetles, grasshoppers, cicadas and caterpillars are favorite meals.

Tarantulas have a mating ritual you might find weird. When a studly male tarantula finds a femaleâ€™s burrow, he plucks the strands of web at the opening to lure her out. If sheâ€™s willing, she comes out, and mating occurs. If sheâ€™s hungry or just doesnâ€™t like that male, she kills and eats him. Wow!

The following June, pregnant female tarantulas build silky egg sacs for 200 to 800 eggs and guard them until they hatch. Teeny, white spiderlings emerge in August and hang around their mother for several days before they set off to start their own lives. Spiderlings molt two to four times each year during the first years of life, but eventually even off to once a year.

There are much bigger tarantulas than ours around the world. The Goliath Birdeater tarantula from the rainforests of South America can have a 4-inch body and 12-inch leg span and weigh 5 to 6 ounces (more than 1/3 pound). Yikes!

Most people are afraid of tarantulas because they think their bite is deadly poisonous, but that isnâ€™t so. Tarantulas have venom in their long fangs, but unless a person bitten is allergic to the protein in spider venomâ€”and thatâ€™s rareâ€”their bite is no more serious than a bee sting. And tarantulas prefer to flee from humans instead of attack them. Mom says thatâ€™s a good thing!