Meet Lorenzo. He’s the cute spotted baby goat pictured above. Lorenzo is coming to live with us this week! 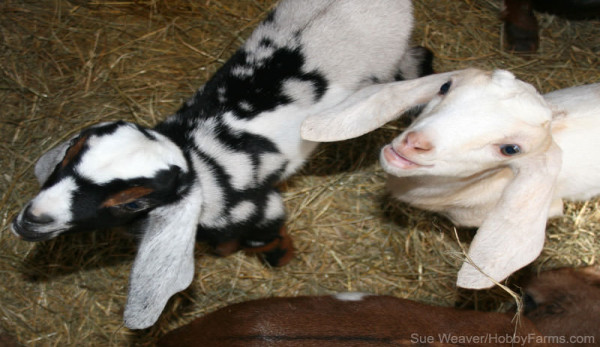 Meet Lorenzo. He’s the cute spotted baby goat pictured above. Lorenzo is coming to live with us this week! He’s a royally bred Nubian from Ages Ago Acres in Alton, Mo., and he’d have grown up to become a big, studly buck like me except for one thing: His first mom, Susie Price, is a very conscientious breeder and tests her goats for a genetic abnormality called G6S mutation. Baby Lorenzo is a carrier, which means he’ll never have any symptoms but he could pass the genetic blip on to some of his offspring. So he’s coming to live with us and grow up to be a cart goat instead.

G6S is short for N-acetylglucosamine-6-sulfatase. It’s a naturally occurring enzyme that helps maintain connective tissues throughout a mammal’s body. The inherited defect that goat people call G6S stops the production of the enzyme before it’s completed, causing a substance called glycosaminoglycans to accumulate in the liver and brain. This creates the progressive specific neuron-generative disease. Symptoms of G6S include slowed growth, lack of muscle mass, blindness, deafness and eventually death caused by liver failure. The longest-lived goat known to be affected by G6S died just before his fourth birthday.

G6S occurs only in Nubian goats and their cousins, like Mini-Nubians. In a human version, called Sanfilippo IIID, affected babies appear normal at birth but soon stop growing, develop neurological difficulties and then die. When the same defect was found in Nubian goats, researchers used Nubians as models for identification and possible treatment, and goat breeders benefited from their discoveries.

Something they discovered is that G6S is an autosomal recessive trait. That means that it involves only one gene, it isn’t sex-linked (both males and females inherit equally) and two copies of the defective gene must be present for a kid to be affected. That means he inherits it from both parents.

The good thing is there’s a very effective blood test to see if goats carry the G6S mutation. The bad thing is that many Nubian goat breeders don’t know about it. Tested goats are given the designation Normal, Carrier or Affected. Once tested, they never have to be tested again.

Normal goats bred to other Normal goats always produce Normal babies, so their kids don’t need to be tested at all. If a Normal goat is bred to a Carrier, 50 percent of the offspring will be Normal and 50 percent are Carriers; that’s how Lorenzo was created. Two mated Carriers produce 25 percent Normal, 50 percent Carrier and 25 percent Affected kids. The offspring of Carrier goats should always be tested. Affected adult goats are rarely bred because most are obviously ill before reaching breeding age.

The G6S mutation was identified by researchers at Michigan State University in 1987. They tested nearly 1,000 Nubian goats in Michigan, finding that about 25 percent carry this abnormality. Since then, some breeders, like Lorenzo’s first mom, have diligently tested their herds and continue testing new kids produced by Carrier parents. Someday, through testing, this defect could be totally eliminated—but only if people test their stock.

This is true of genetic defects in other breeds and other species. Here are some to think about testing your animals for:

Most breeds of purebred dogs and cats have various types of abnormalities in their genetics, too, and testing can identify carriers.

Testing isn’t cheap, but it’s effective and can save the heartbreak of breeding disabled animals or youngsters that invariably die. If you want to breed livestock and aren’t sure what genetic defects lurk your animals’ backgrounds, talk to your cooperative extension agent or an experienced breeder. To discover what defects plague which dog breeds, download the “Humane Society Veterinary Medical Guide to Congenital and Heritable Disorders in Dogs.” The Cat Fancier’s Association offers “Heritable Diseases and Abnormalities in Cats.” Knowledge is power.