This is the season full of local festivals where the locals gather and all eat together under big tents. 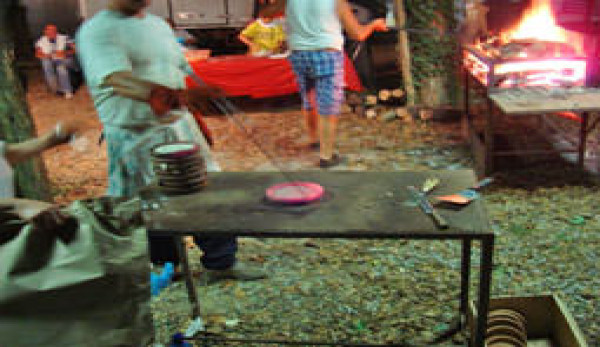 This is the season full of local festivals where the locals gather and all eat together under big tents.Â

Usually there are only five or six hundred people at the smaller affairs, but the really big events, like La Sagra delle Pesce (Fish) ten minutes up the coast in Camogli, where they fry fish in a huge frying pan fifteen feet in diameter, can draw many thousands of attendees.Â

We, of course, wouldnâ€™t be caught dead at one of these big touristy festivals, and favor instead the little uncrowded festivals in the distant interior valleys where time seems to have stood still for the last few hundred years.

Sometimes the festivals involve carrying crosses or holy sculptures from the local church on a tour of the town, and sometimes the festival is dedicated to a particular food item, in which case it is called a sagra, like La Sagra delle Castagne (Chestnuts).Â

Weâ€™ll probably attend the Sagra della Trota (Trout) up in the mountains next weekend.Â  Until their recent collapse, one of the minor Italian political parties threw an annual week-long festival in Rapallo that featured zero politics, but lots of great food, with the menu changing every night.Â  This particular festival was a favorite with lots of people we know, and some years weâ€™d eat at the same festival three or four nights in a row, with different friends each night.

These photos are from La Festa della Agricoltura that was held Saturday evening in one of the interior valleys.Â  The star food item at this festival was the ancient peasant recipe called testaieu, (test-eye-you-uh) which is a pancake sort of affair with basil pesto spread on top.Â Â

Itâ€™s pretty tasty, but the way they make it is spectacular.Â  First they build a big bonfire and then they throw a bunch of rough clay dishes into the roaring fire.Â  (Okay, actually the cooks at this festival used a small fire on a grill.) When the dishes are red hot, they use long steel tongs to pull them out of the fire.Â

A dough mixture is poured into the first hot dish and then another dish is placed on top of it and filled, and so on until the stack is eight or nine plates tall.Â  The heat from the dishes cooks the dough in a minute or so, after which the testaieu are scooped onto the serving plates and covered with pesto.

I hear that this recipe was invented by the Ligurian hill people a thousand years ago, apparently before frying pans were available.Â  Obviously, nobody makes this recipe at home anymore.Â  Exceptâ€¦they do sell the clay dishes as souvenirs sometimes and I buy a few every once in a while.Â

When Iâ€™ve collected enough of the dishes, weâ€™ll build a bonfire up at my friends Richard and Julietâ€™s farm and have our own Sagra delle Testiaeu!Â