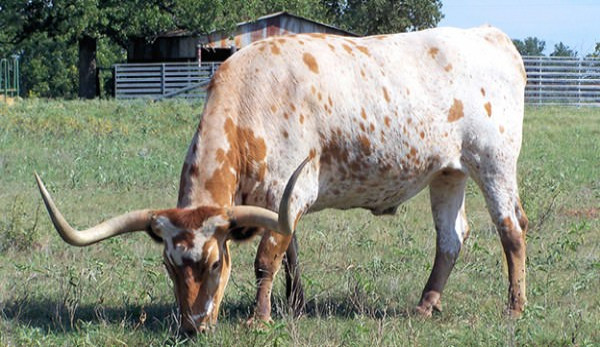 Use: Many breed enthusiasts keep Texas Longhorns as pets, curiosities, and links with the past; a growing faction of admirers ride Longhorn steers in parades, shows, and on trail rides; and Longhorns produce tender, tasty beef that is lower in fat, cholesterol, and calories than the meat of most other breeds.

History: When Christopher Columbus embarked on his second voyage in 1493, he carried in his hold the first cattle to set foot on American soil. Many followed. These intrepid Spanish cattle, likely mixed with cattle moving west with American settlers from the East, were the ancestors of today’s Texas Longhorns. Early Spanish cattle invariably escaped and naturalized throughout the area comprising our American Southwest. Tough, ingenious, and fecund, they multiplied by the millions. Enterprising cattlemen captured them, domesticated some, and drove countless numbers along cattle trails to slaughter. Their heyday, however, ended in the early twentieth century when British breeds like the Hereford, Angus, and Shorthorn became the cattle du jour. Texas Longhorns all but disappeared; then in 1927, the United States government placed remnant Longhorn herds on wildlife refuges in Oklahoma and Nebraska; the state of Texas followed by installing herds in Texas state parks. Conservators and history buffs started breeding Longhorn cattle and in 1962, the Texas Longhorn Breeders Association was formed.

Conformation: No one ever described Longhorns’ colors better than J. Frank Dobie, writing in The Longhorns (Little, Brown & Company; 1941): “The colors were more varied than those of the rainbow. There were brindles; blues â€“ mulberry blue, ring-streaked blue, speckled blue, grullas â€“ so named because they had the hue of the sandhill crane, also called mouse-colored or slate duns, washed-out and Jersey creams — all hues of ‘yellow’ browns with bay points; blacks, solid and splotched with white, brown and red; whites both clearly bright and dirty speckled; many sabinas, red and white peppered; reds of all shades except the dark richness characteristic of the Hereford, pale reds being very common; paints of many combinations. The line along the back was common, as in the mustang breed. Coarse brown hairs around the ears were characteristic. The shadings and combination of colors were so various that no two were alike.” Amazing color, plus impressive horns (on trophy steers, sometimes as long as 120 inches from tip to tip) and rangy good looks help Longhorns stand out in any crowd!

Special Considerations/Notes: Longhorns are incredibly hardy animals; these are cattle that know how to take care of themselves. They’re extremely fertile and long-lived cattle; cows calve annually (and easily) well into their teens. They adapt to all climates, they’re parasite-resistant and they thrive on marginal pasture, making them ideal for grass-fed and low-input management situations.