As drought conditions persist in some U.S. states, farmers worry about meeting grain- and grazing-production needs. 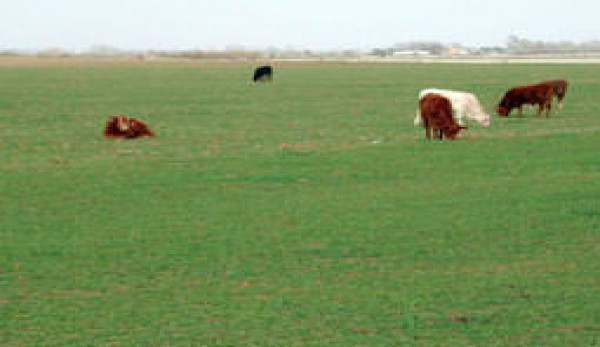 While states along the East Coast are recuperating from storm and flood damage caused by Hurricane Irene, states farther west, like Texas, are still trying to cope with devastating drought conditions. After theÂ failure of many summer crops due to drought, farmers now have good reason to worry that they wonâ€™t make a winter wheat crop either, according to experts at the Texas AgriLife Extension Service.

â€śThere are some real concerns right now, not only about potentially getting the crop up in the future, but about what kind of yield potential we are going to have with the crop if we do,â€ť says Dr. Todd Baughman, AgriLife Extension agronomist for Texasâ€™ Rolling Plains region.

The concern focuses on soil-moisture reserves, as the bulk of winter wheat is planted during September and October, Baughman says. Without better soil moisture, the crop will not even emerge.

The need for better soil moisture is felt not just for grain production, but for livestockÂ forage production, too, as winter wheat is also commonly relied upon for fall grazing, he says. And wheat producers have reason to be concerned throughout most of Texas.

â€śIf you donâ€™t get it up and growing, thatâ€™s going to limit your fall grazing, which is really going to hurt you from a cattle-performance standpoint,â€ť Baughman says. â€śThatâ€™s probably the No. 1 fear that weâ€™ve got right now.â€ť

But for those who need grain production, the lack of soil moisture is causing a lot of anxiety, as well.

â€śIf we donâ€™t build up some soil moisture to grow this crop, thereâ€™s concern that itâ€™s going to run out of water just like the cotton crop has done this year because it wonâ€™t have any real deep moisture to help with the yield potential,â€ť Baughman says.

Many farmers plant wheat for both grazing and grain production, pullingÂ cattle off fields in time for the crop to make grain. But wheat for grazing is an even higher priority this year because the drought has caused summer grazing to become non-existent and continued feeding has exhausted hay supplies.

â€śTypically, what youâ€™ll see is that somewhere between mid-September to the middle of October is the prime planting time for grazing,â€ť Baughman explains. â€śOf course, we would really like to be planting right around the first of October. For our grain guys, most planting will start somewhere in the middle of October to Thanksgiving. That would be the prime time that we would like to plant the crop as a grain-only crop.â€ť

But even those planning wheat as a grain-only crop could run into trouble this year, he says. This is because November typically signals the start of a drier time of year for most of the stateâ€™s wheat-growing regions. If moisture reserves arenâ€™t already built up before winter, the chances to make a good grain crop will be greatly diminished.

â€śThe driest months, if you look at historical weather records, will be December, January and February,â€ť Baughman says. â€śNovember will be slightly behind those, so if we donâ€™t get any rainfall from now through the first of November, then the chance of actually building that deep moisture up is limited even in a normal year.â€ť

And this has been far from a normal year, he says.