Since I was a little kid, I’ve wanted to raise my own horse. I’ve finally gotten around to it. 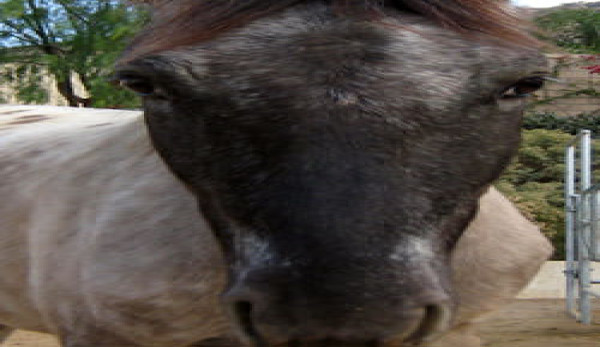 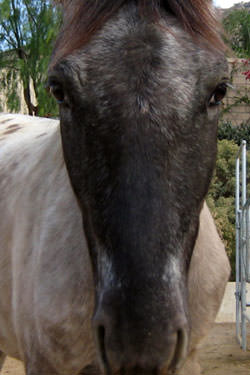 Rio on his way to eating the camera.

Since I was a little kid, I’ve wanted to raise my own horse. I’ve finally gotten around to it.

His name is Rio, and he’s a Spanish Mustang. He was almost 2 years old when I had him shipped from Texas to California last December. Spanish Mustangs are rare, and ones with the LP gene that gives them spots like an Appaloosa, are even rarer, which is why he came from so far.

I bought him sight unseen. Just photos and a video of him as a little baby romping around with his mom. His breeder described him as a real character. I could totally see that in the video. He was a little imp, reminding me of my other Spanish Mustang, Milagro, whose nickname when he was young was “The Pest.”

Rio has not only taken “The Pest” crown from Milagro, he has given the name a whole new meaning. I have never met a horse so unflappable and so nosy. It’s a good thing in a prospective urban trail horse. But it can drive you crazy around the house.

Our version of a turnout space is the small area around our pipe corrals. When we let Milagro and Red, our 22-year-old Quarter Horse, loose, they wander around and nibble on the coyote brush and rose bushes just behind the fencing, happy to be out of their stalls and “searching” for food that way horses are meant to do.

But when Rio is there, look out! It’s like having a 600-pound puppy loose in your backyard. Everything goes in his mouth. I mean everything.

I once mistakenly left my cell phone sitting on a bench back there. Lucky for me, I happened to be looking in Rio’s direction when he decided to suck the phone into his mouth. I lunged for it just as it disappeared beyond his lips and ended up having to put my hand all the way past his back molars to retrieve it. As soon as I got it out, it started to ring. I was amazed it still worked, because it was dripping with horse saliva!

Then two days ago, Randy left a pair of riding boots on that same bench for my friend, Michelle, who was supposed to ride with me that evening but didn’t have her riding clothes with her.

“I’ll leave the boots on the back bench,” Randy told Michelle over the phone in the afternoon. But when Michelle came later to fetch them, no boots could be found.

Michelle called Randy and told him she couldn’t find the boots. The two of them went back and forth for a while, each thinking the other was stupid, blind and/or insane because the boots were there, but no, they weren’t. When they hung up, Randy went outside to verify that he did, indeed, leave the boots on the bench. That’s when he realized that he had forgotten about the 600-pound puppy. After considerable searching, Randy found one boot in the bushes, and the other behind a manure bin.

Part of me is hoping Rio grows out of this mouthy thing, because it drives all of us crazy. Another part of me is thinking I should make use of it by training him to pick up dog poop. Because he’s too young to be ridden, that would be one way for him to earn his keep right now. Although I don’t relish the idea of having to fetch dog poop from beyond his back molars. On second thought, never mind.