My son and I found the strangest insect in our house the other day. It was climbing on the woodwork around the front door. Since working on my most recent book, I have come to greatly appreciate bugs and pay careful attention to the ones I find in my garden. This one, though, had me intrigued. 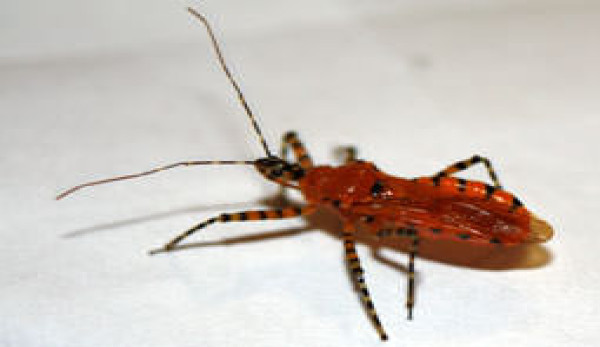 My son and I found the strangest insect in our house the other day. It was climbing on the woodwork around the front door. Since working on my most recent book, I have come to greatly appreciate bugs and pay careful attention to the ones I find in my garden. This one, though, had me intrigued.

I had never seen one like it before in person but remembered seeing it on BugGuide, one of my favorite websites. I got online and discovered itŌĆÖs an orange assassin bug Pselliopus barberi. I knew it was some kind of assassin bug by the long sword-like mouthpart tucked under itŌĆÖs body and itŌĆÖs stilt-like legs, but I wasnŌĆÖt sure what kind. Sometimes itŌĆÖs hard to believe thereŌĆÖs any bug in Pennsylvania that I havenŌĆÖt seen after gardening here for 25 years. There are just so many out thereŌĆöitŌĆÖs nice to know I can still look forward to discovering more!

Assassin bugs, as a whole, are considered┬Ābeneficial insects because they prey on many common pests. However, they will snag a bumblebee as quickly as a potato beetle. It made me wonder how this one got into my houseŌĆöit was an accident IŌĆÖm sure.

Of course, I ran to get my camera and put the extension tube on the lens so I could snap some pictures. While I was away, I asked my son to keep his eyes on the bug to be sure it didnŌĆÖt fly away. ŌĆ£But donŌĆÖt touch it,ŌĆØ I told him, ŌĆ£because if you handle assassin bugs that big mouth ŌĆśspikeŌĆÖ can pierce your skin and leave a nasty welt.ŌĆØ

I managed to snap some pictures, but this guy really didnŌĆÖt like having the camera so close and actually flew at the camera a few times and landed on my shirt. Ugh! Again, I appreciate insects, but donŌĆÖt necessarily want this particular one on me. I got it to crawl off my shirt and onto a piece of paper and then put it back down for some more pictures.

I think the little guy was relieved when I finally put him back outside. My son, of course, ran for the bedroom when the bug flew up onto me. And he wouldnŌĆÖt come out until he heard me open the front door and say goodbye.

Horticulturist Jessica Walliser is an award-winning radio host on KDKA RadioŌĆÖs ŌĆ£The Organic GardenersŌĆØ in Pittsburgh. SheŌĆÖs the author of five gardening books, including the Amazon-bestseller Good Bug Bad Bug, winner of the 2014 AHS Book Award Attracting Beneficial Bugs to Your Garden: A Natural Approach to Pest Control, and her newest title Container Gardening Complete: Creative Projects for Growing Vegetables and Flowers in Small Spaces. Jessica also writes two weekly gardening columns for the Pittsburgh Tribune-Review and is co-owner of the website SavvyGardening.com.