While cleaning out the vegetable garden yesterday, I noticed many little funnels carved into the soil. Discovering things like this always reminds me that I am never alone in my garden. 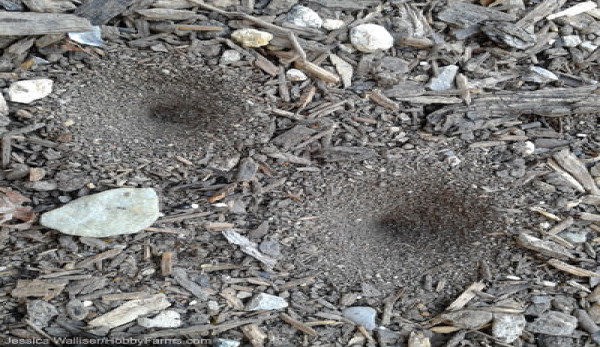 While cleaning out the vegetable garden yesterday, I noticed many little funnels carved into the soil. Discovering things like this always reminds me that I am never alone in my garden. On 1 acre of land, there are an estimated 425 million living insects. Right here in my tomato patch, itâ€™s no different.

The insects that made these cool little funnels are known as antlions. Also sometimes called doodlebugs, antlions are the larvae of a beautiful night-flying creature that looks much like a delicate damselfly, but with longer antennae. Larval antlions excavate these craters in sandy soils all around the world and use them as pitfalls to catch their prey. When an unsuspecting insectâ€”like an ant, young spider or flea beetleâ€”tip over the trap’s edge, the angle of the funnel makes it nearly impossible for it to climb back out. The antlion is waiting in a hole at the bottom, ready to nab its prey.

If, by chance, the ant doesn’t fall immediately to the bottom of the trap, the antlion begins to toss pieces of sand at it, effectively causing a mini landslide and sweeping the prey into its waiting jaws.

Larval antlions are crazy-looking creatures with rounded abdomens, an elongated “neck,” a flattened head and big, sickle-like mandibles. They use these curved jaws to nab their prey and inject them with a toxin that liquefies their innards before consumption.

The pits in my garden are 1 to 2 inches in diameter, and there are about two dozen of them in just a few square feet. Because of antlionsâ€™ lifecycle, I know that they are going to be there for awhile. Adults live for only about three weeks, but it takes these insects two to three years to complete their lifecycle. That means most of their life is spent at the bottom of a pit waiting for a hapless victim.

There is absolutely no need to worry about my safety (or the safety of any other mammal for that matter) when it comes to antlions, as these insects are far too small to drag me into their pit. Nor are their jaws large enough to grab onto my skin. If I step on their trap and accidently destroy it, the antlion will simply wait for me to move on and rebuild.

In fact, if you’re interested in a cool science project, use a trowel to dig up a funnel and sift out the larva with a screen. They make great pets. Fill a jar or bowl with sand or salt and watch the larva built the funnel. They scoot backwards in a circle over and over again, tossing grains out as they go until their pitfall trap is complete. You can feed your new pet antlion ants and other small insects. Simply place lunch into the jar or bowl and watching it fall into the trap. Isn’t nature awesome?