The Anatomy Of A Honeybee

Much of the success of the honeybee's work is thanks to its expertly designed body. 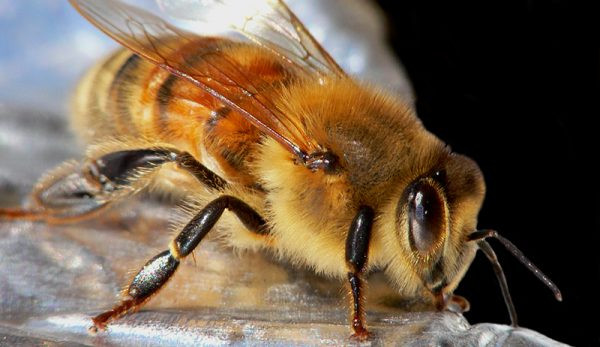 A honeybee’s body isn’t justĀ fuzzy with a scary stinger. ItĀ is divided into three sections: the head, the thorax and the abdomen. Like other insects, honeybees have an exoskeleton, and like some other bees, their bodies are covered in fuzz called brush hairs. As foraging honeybees visit flowers, their brush hairs are covered in pollen, which they then groom into small nodules on their back legs, calledĀ pollen baskets. We can thank the bees’ brush hairs for both pollinating flowering plants and bringing home a vital source of protein to the other hive members.

In all three castes of honeybeeāworker, drone and queenāthe bee has two sets of eyes. The compound eyes are located on either side of the head and are considered primary eyes. They’re large andĀ make it possible for the bee to detect ultraviolet light and the polarization of light, which is critical in determining the precise location of the sun, and in turn, being able to return the hive’s location. The other set of eyes, called ocelli, primarily help the bee navigate the darkness of the hive.

Antennae on what we might consider the bee’s forehead contain thousands of olfactory sensors used to process myriad smells: various flowers, hive mates, comb, honey, brood and, of course, your hands as you inspect the hive. The beeās jaws, or mandibles, are used to shape wax and build comb, feed larvae, remove debris from the hive, and collect pollen. The bee’s long and hollow tongue, called a proboscis, is used to take in nectar, water and honey, and it curls up and retracts when not in use.

The thorax is the core of the bee, anchoring the two sets of wings and three sets of legs. Positioned centrally, between the head and the abdomen, the thorax is critical to the beeās ability to walk, fly and climb. The honeybee has two sets of wings, totaling four wings in all, that allow her to fly. They are also used to fan nectar into honey, cool the hive on hot days, and aide in communication movements called waggle dances.

The honeybee has three sets of legs, each with a specific purpose. The legs closest to the head are tasked the duty of cleaning the antennae. The middle legs are used for walking, crawling and climbing and collecting pollen. Those legs also assist in the production of wax by being able to reach and grab the wax glands located under the abdomen. The third and final set of legs contain the pollen baskets used to carry pollen home to the hive.

The abdomen is the part of the body that holds the wax and scent glands on workers, the stinger on workers and the queen, and the digestive organs and reproductive organs on all honeybees. The abdomen is easy to spot by the yellow-and-black stripes that cover it.

The abdomen contains the bee’s respiratory organs, reproductive organs, cardiovascular and digestive organs, and not one but two stomachs. The first is the true stomach, used for the digestion of food and production of energy. The second honey stomach is a very special organ reserved just for the honeybee. With it, she temporarily stores gathered nectar from her foraging trips and returns with a full honey stomach to the hive. Once home, she transfers the contents to a house bee, who stores it in comb, where it is fanned and turned into honey.

The underside of the abdomen is home to the bee’s wax glands, where wax scales are produced, ready to be chewed and formed into comb.

The honeybee may seem simple to the naked eye, but nature has expertly crafted her for aerial flight, pollination, effective communication, honey production and so much more. Enjoy tending to these intriguing bugs by knowing what makes them tick.