The Anatomy of a Swarm: What Goes on Inside That Cluster?

Once you understand what takes place during a honeybee swarm, it's not as scary as you might think. It's not an act of aggression, but rather a search for a new home. 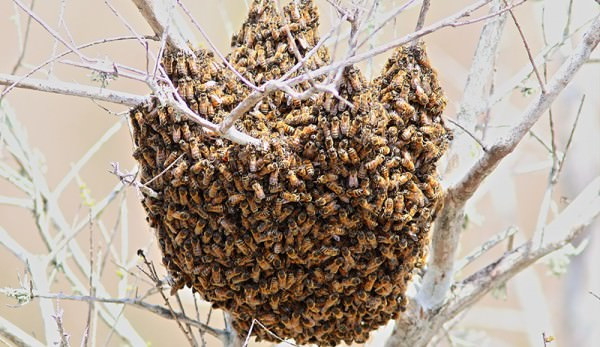 Many equate the act of swarming with aggression, but in truth, if you were to encounter a swarm of honeybees, youād face the gentlest nature of Apis melifera. Without a home to defend or young to care for, the 10,000 (or so) bees and the single queen that typically comprise a swarm are as carefree as bees getāfor a little while, anyway.

So how does that swarm cluster end up draped high on tree limb, and what are all the bees doing there? Letās start at the beginning.

In the early spring, when flowers begin to bloom and nectar starts to flow, the hiveās queen ramps up her laying. Soon, a demure winter cluster of a few thousand bees becomes a hive 50,000 to 60,000 strong, bursting at the seams and dripping from the entrance. As the hiveās capacity reaches its limit and the colony knows the structure simply canāt hold, the bees instinctively know itās time to swarm. A swarm is the honeybeeās way of propagation, after all.

To begin swarming preparations, nurse bees create a new queen, because the swarm will take the resident queen with it. Through this process, a few select eggs are chosen as potential queensācontinually fed royal jelly throughout their larvae-hoodāand queen cells (sometimes called swarm cells) are created around them. There, they grow. The swarm is long gone once the queens hatch, but when they do, the first one to emerge will kill the other potential queens in their cells and take the honeycomb throne, so to speak. She the new queen sets off on her mating flight, returns full of fertilized eggs, and leads the next chapter of that colony.

Once the process of swarming is under way, the worker bees prepare to leave by filling up with as much honey as their tiny bodies can carry. Along with their mated queen, who will lead their future colony, the entire swarm sets off. To a watching bystander, the process of swarming looks terrifyingāakin to an insect version of Alfred Hitchcock’s film, The Birds.

Buzzing and rapidly flying honeybees fill the sky, turning it dark. The air around them literally buzzes. Eventually, the wayward bees find a spot to settle and rest, forming a ball, or cluster, with their queen in the center. Usually, the swarm cluster lands only several feet from the mother colony. Thatās when things get interesting.

With the queenās pheromones keeping the majority of the bees within the cluster, a few āscout beesā will set off in search of a safe new location to set up the colony. The bees search many different places: old buildings, hollow trees, barns and other human structures, even vacant grills. The scout bees perform an amazing feat: While scouting, they take measurements of potential new home sites and return with that information to the cluster. Through a series of dances (much like the waggle dance that honeybees use to share information about foraging sites), the scouts convey information about the potential new home to the cluster, while they encourage other scouts to go take a look.

Original scouts and new scouts then congregate in and around the chosen home sites. Some studies suggest that as the bees gather, a consensus is formed on the home site with the most scout bees in attendance. The decision is then made for the site with the most āvotes,ā and the scout bees return to the waiting cluster to alert the rest of the bees to the decision.

The process, from departing the mother hive to the eventual group decision of a new home site, can take a few hours to a few days, though a typical duration is about 24 hours. Then the bees are off yet again, buzzing and darting in the sky, now with set destination: their new home.