The Anatomy of an Egg: We Take a Closer Look

The egg is pretty much a perfect food, good for the body and versatile in the kitchen. Getting inside the shell of chickens' daily offering reveals why. 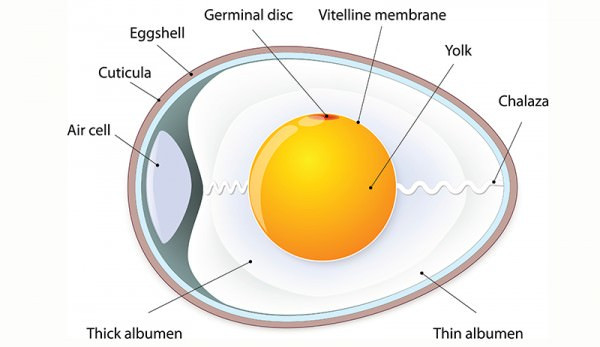 Whether for scrambling, frying or poachingâ€”or for its original purpose of incubating and protecting a developing chicken fetusâ€”the egg does its job well. Its perfectly designed layers protect the contents from bacteria and the dangers of the environment, all while offering abundant nourishment to growing chicks or consuming humans.

The chicken egg is the perfect protein. A pastured henâ€™s egg yolk contains vitamins A, D, E and K, loads of good cholesterol, lecithin (a natural emulsifier that helps break up fats and ease digestion) and lots of healthy fats. An egg yolk is a wonderful natural source of choline, an essential nutrient that contributes to proper liver function and healthy brain developmentâ€”critical for pregnant women, nursing mothers and young children.

The albumen, or white, is a nutritional powerhouse, too. It contains a bit more protein and a bit less fat than the yolk, and itâ€™s packed with B vitamins, including B-2, B-6 and B-12. It even has a low-calorie count. Those with allergies or egg sensitivities tend to be less reactive to the albumen than the yolk, too, so itâ€™s a good place to start for someone who is assessing the suitability of eggs.

While the yolk and the albumen are wonderful on their own, together they make an exceptional, unrivaled food source. In many ways, the yolk and white must be eaten together to reap the benefits the egg has to offer. For example, the vitamin E found in the yolk works together with the selenium in the egg white to create antioxidant qualities, helping to prevent the breakdown of body tissues.

Most notably, a whole egg is one of the few food-based sources of all nine essential amino acids that the human body needs for healthy immune function. The human body canâ€™t produce these essential amino acids on its ownâ€”we can only produce ones called dispensable amino acidsâ€”so we must get them from food. Amino acids also combat the absorption of excess fat, so consuming the fattier yolk will help fight fat better in the long run than eating only the egg whites.

Finally, you might know about omega-3 fatty acids. Just like essential amino acids, the body canâ€™t synthesize them, so we have to source them from the foods we eat. Hens with a varied diet, such as those that are pastured, raised on grass and able to forage, produce eggs naturally higher in omega-3s. Grazing for part of their diet is good for your hens and good for you, too.

Now that we know how nutritious the egg is, letâ€™s see what the yolk and albumen look like under the shell.

Before itâ€™s scrambled into a meal, the yolkâ€™s primary purpose is to nourish the developing embryo through the process of incubation. Contrary to popular belief, the yolk doesnâ€™t become the chick; it feeds the chick. With hatching imminent, the fetus absorbs the whole yolk in preparation for hatching. The newborn is then nourished by the remainder of the yolk sac for as long as three days while it waits for its siblings to finish hatching.

The yolkâ€™s color doesnâ€™t change based on the breed of hen that hatched it or the breed of chick that will hatch. Rather, the color comes directly from the variety in a birdâ€™s diet. A hen that has dined on greens, grass and a range of foraged proteins produces yolks deeper in hue. Compare this with the pale-yellow yolks of store-bought eggs.

Transparent in its raw, liquid form, the albumen turns white when heated and cookedâ€”hence its common name. The albumen is packed with proteinâ€”about 40 proteins, actuallyâ€”while the rest is water. It includes four sections: the outer thin, the outer thick, the inner thin and the inner thick.

The shellâ€™s main function is maintaining the integrity of the eggâ€™s yolk and albumen and protecting the developing embryo. It seems to do this primarily through its hard, calciferous outer structure, but the shell has three layers.

Chicken-keepers come into contact with the bloom often. Itâ€™s water-soluble and easily washed away, which is why itâ€™s so important to refrigerate washed eggs: The water destroys the bacteria-repelling properties of the bloom, leaving the inside vulnerable. For the keeper interested in eating the egg, this means that an egg deteriorates faster and becomes increasingly unsafe to eat. The conclusion: Donâ€™t wash your eggs unless you absolutely have to.

The egg is a dutiful worker in the kitchen and bakery, creating magic through its role as a binding or thickening agent, an emulsifier and a glaze, among other things. The eggâ€™s many culinary feats can be attributed to its proteins and how they react to different elements, temperatures and applications. The proteins and moisture content contribute to leavening, for example. As an egg is rapidly beaten, the proteins unwind into a flexible film that encloses air bubbles, creating a fluffy texture that holds its shape. This process is critical for creating a meringue or soufflĂ©.

When an egg is heated, the moisture converts to steam, creating air pockets in a food or baked good that give the product texture. The yolk enhances almost any foodâ€™s richness and flavor; think of the delicious gooeyness in a perfectly baked cookie or brownie. The proteins continue to work in other ways: Heating an egg naturally congeals its proteins and allows the egg to act as a binding agent to create structure. Think of the way meatloaf, meatballs or casseroles can hold their shape.

Lecithin, an important fat emulsifier you might recognize from reading food labels, is also present in an egg yolk. Yolk lecithin works to break apart fats and suspend the rest of the food together. Without lecithin, we couldnâ€™t achieve the velvety texture in hollandaise sauce or mayonnaise.

The egg is an incredible feat of nature, a superfood that chicken-keepers have in abundance. Of course, in its primary role as the first home for a developing chick, itâ€™s a superior incubating structure, too. In combination with the mother henâ€™s fluffy feathers, gentle movement and ambient warmth, the egg expertly ushers new life into the henhouse.