The Battle Against The Autumn Olive

Our property is riddled with this invasive plant, and fighting the problem is a sustainability balancing act. 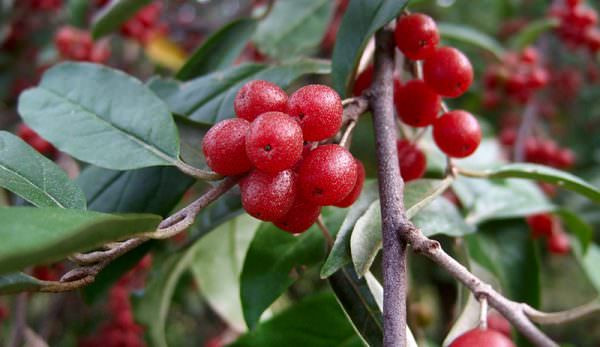 Now that autumnâ€™s chill has officially set in, killing all the chiggers and ticks that had me dreading the outdoors during the summer months, Iâ€™ve finally had a chance to literally get off the beaten path and explore more of our new land. Each walk I take through our woodlands gives me so much joy as I observe the wildlife and the diversity of plants growing. However, I have one major concern that sticks out like a sore thumb on our property, particularly this time of year: the autumn olive.

When we met with our local forester back in August, we learned that our woodlands were pretty healthy save a good-sized population of this invasive plant. The autumn olive is a hardy native to Asia once planted by well-meaning conservationists as windbreaks and to attract wildlife in areas where native hardwoods were having problems growing, such as mountaintop removal sites. Itâ€™s actually a pretty bush, easily distinguished by the silvery undersides of its leaves and staying green long past when other trees have begun to turn, but itâ€™s incredibly prolific. The seeds are spread by birds and small mammals, and the plants will grow easily in poor soils due to their rootsâ€™ nitrogen-fixing abilities.

Itâ€™s hard to break the grip of an autumn olive once it takes root. Cutting or burning these plants doesnâ€™t actually kill them but actually results in increased sucker production, so other forms of eradication are necessary: The two options Iâ€™ve been told are the most effective are manual removal of the entire plant, including root system, or herbicides.

This leaves me in a bit of a predicament. With bees on our propertyâ€”bees that happen to love the autumn olive flowersâ€”Iâ€™m hesitant to use an herbicide. Glyphosate and triclopyr are most commonly recommended for autumn-olive eradication, but the former is mildly poisonous to bees and the latter to birds and fish. But given the huge grove of bushes I encountered on a recent hike, it would be a full-time job to get these all out by hand.

Part of me wants to ignore the problem for now and focus my efforts on what I do want growingâ€”after all, the berries are edible with purported health benefits, so they arenâ€™t inherently evil plantsâ€”but I know this thought is foolish. Autumn olives will shade out native plants due to their quick growth, creating basically a monoculture within our forest. Iâ€™m not sure Iâ€™m willing to give up all the benefits of a diverse ecosystem for a berry that frankly tastes quite sour.

So Iâ€™m trying to wrap my head around how to use chemical control as smartly and efficiently as possible to reduce the impact on our land while also getting the autumn olive population under control. After talking to a number of friends I consider sustainability experts, Iâ€™ve learned itâ€™s important to take action during certain windows of time: when the plant is taking up sap but fruits or flowers arenâ€™t being produced, such as early spring or late autumn. Itâ€™s easy to spot the bushes during these times, as well, because in our area, the autumn olive is one of the first plants to turn green in the spring and one of the last to drop its leaves in the fall. The method that to me seems most effective in keeping the herbicide localized is cutting the bush at the base and painting the herbicide on the stump. That way, we donâ€™t have the overspray that methods like basal bark treatments and foliar sprays would create, but it also means weâ€™ll have to work during dry periods so the chemical doesnâ€™t run off and affect surrounding plants we want to encourage.

When it comes down to executing our management plan, weâ€™ll probably end up doing a combination of techniques: pulling up small bushes where we can and fighting bigger bushes with more forceful measures. In the end, itâ€™s all about balance and making decisions that can result in the healthiest land possible in the long term.