Even if your farm is less than 10 acres, you can raise a couple of beef cows to feed your family throughout the year. 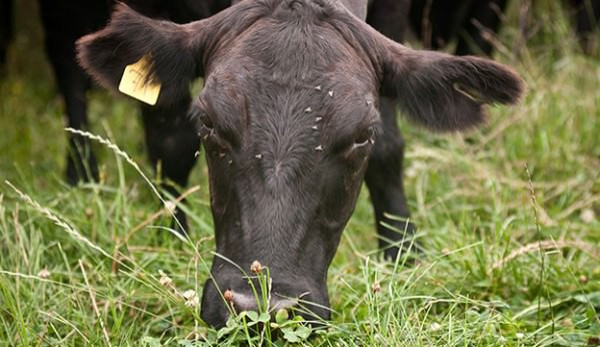 If you’ve ever listened or watched one of the news reports about antibiotics used in meat production or yet another food recall, you’ve probably cringed and thought, “There is something seriously wrong with our food system!” When substances used to grow our food cause potential harm to the livestock and to ourselves, there certainly appears to be a problem. If you’re anything like me, you want to be able to feed your family wholesome food that is raised according to your ethical and health standards.

I grew up on grassfed beef long before it became the cool thing on the market. My father, having grown up during the Great Depression, knew the reality of not having food to eat if you didn’t raise it yourself. My parents raised our own beef because it was cheaper than purchasing it in the store. At that time, grain-fed beef was preferred, but where I live in the Pacific Northwest, we didn’t have acres of pasture to grow our own grain, and grain was more expensive than grass hay.

When my husband and I married, we both agreed we wanted to be able to live off the land as much as possible. During our first year as newlyweds, we purchased a quarter of beef from my father, but we ran out of hamburger about three months before butchering time in the fall. For the first time in my life, I purchased store-bought hamburger.

I couldn’t believe the amount of liquid and fat that came out of the meat, even though I’d purchased lean. It had an odd odor even though it wasn’t bad. And the flavor—we could barely eat it.

From that moment on, my husband and I vowed to raise our own beef and never purchase it from the store again. I encourage you to consider raising your own grassfed beef because once you experience it, you’ll never go back. Raising a couple cattle can feed your family and then some for the year. You don’t even need a lot of land to do it—as a rule of thumb, you can keep one cow-calf pair per every 2 acres of pasture for 12 months. 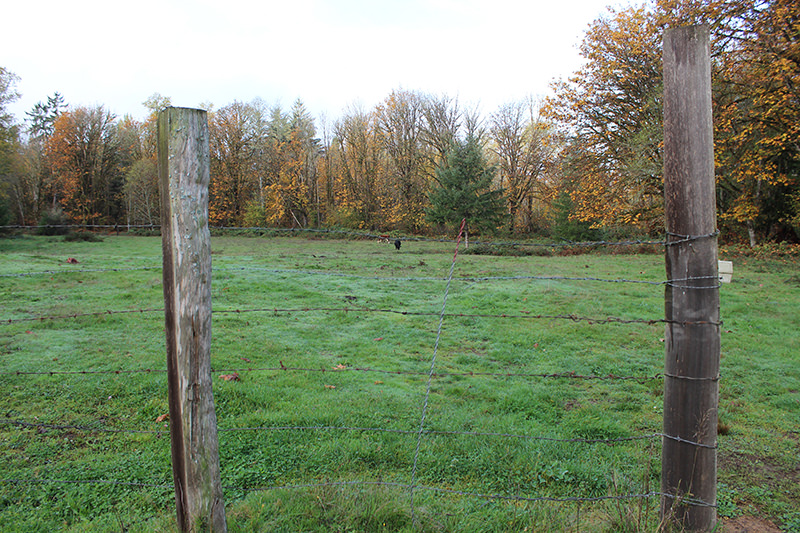 One of the most important things you’ll need in place before raising cattle, no matter the size of the herd, is good fencing. If there’s a hole in your fence, a cow will find it. There are three main fencing options for cattle:

Barbwire is best if you’re fencing acreage. You’ll want to have at least three strands, though four is best. The bottom strand needs to be low to the ground, as cattle can do a mean belly crawl, and the top strand needs to be close to 4 feet tall, as cattle are surprisingly agile and can jump quite high when they want. Another excellent item is for your fencing are metal wire stays. These keep your cows from pushing their way through the fence. Remember, they’re like a mouse, if they can get their head through it, their body will follow.

Electric fencing is another good option, but this will require electricity, whether obtained from the grid or solar panels. When using electric fencing you need to have good ground, and in dry areas or during droughts, this can be more difficult. Be aware that as brush and vegetation grow, they may fall or push on the wire, causing it to short out. Electric fencing is often better suited for smaller pens or pasture areas.

I have to confess, there is little else more charming than a weathered wooden fence. However, if you’re fencing acreage or large paddocks, wood becomes expensive fast. Here in the Pacific Northwest, wood also rots rather quickly, though cedar is often a good wood of choice because it holds up longer.

Your choice of fence posts will range from metal T-posts to wooden ones. We use railroad ties or cedar posts for all of our corner posts, gates and as middle section during long stretches of fencing. Remember, unless you’re in free-range country, if you’re cattle get out, you’re responsible for any damage they incur, so good fencing is important.

Cattle are herd animals and find safety in numbers. If at all possible, you’ll have better luck raising a pair than a single cow, and you can keep one of the cows as your breeding stock.

You’ll hear a lot of opinions about which cattle breed produces the best-tasting meat. While some breeds produce larger steaks or grow more quickly than others, in our experience we’ve found the flavor of your beef comes from what you feed your cow and how it’s handled during and after butchering.

You can purchase cattle at auction, but we prefer buying from local breeders so we can see the cattle’s condition, observe the rest of the herd and ask the breeder questions.

Water For Your Cattle

Your cattle will need access to clean water. This is even more important than feed. If you don’t have a natural water source, like a pond or creek, on your property, you’ll want to use a large water trough. Instead of purchasing a conventional trough, we use an old cast-iron bathtub. Keep an eye out for people doing a remodel, and you can get older tub for free.

Locate your waterer close to your water source. Miles of hose isn’t fun and can be tough to manage during the freezing temperatures of winter.

Ideally, your land will produce enough grass to feed your cattle for the majority of the year, but most people will have to feed hay during the winter months when grass goes dormant. Seed your pasture with different varieties of grass to help stretch your pasture further into the year. We’ve been looking into Triticaline, a cold-weather grass originating from Russia.

If you only have one or two cows, you’ll most likely feed square hay bales during the colder months. Purchasing from an independent farmer or baling straight from the field will be cheaper than purchasing from a feed store—you’ll usually pay more for the second cutting. Cover the stored hay to protect it from rain, wet hay will grow mold and be of poor quality for your cattle.

If you have more than two cows, however, look into haylage—the large round bales that look like marshmallows. This is grass hay is rolled when it reaches 60- to 65-percent moisture content, as opposed to 18 percent of regular baled hay. Haylage is an excellent feed source and what we use for our herd. It’s higher in protein count and more cost-effective per ton. When we switched to using all haylage, our yearly feed bill was cut in half.

To avoid having your cattle waste the hay, you’ll find most people feed in a large, round feeder so the cows can’t make it into bedding. After they’ve laid in or soiled the hay, they won’t eat it. We will also unwind the hay from the main round bale and feed it by hand, making sure to cover the bale back up with a large tarp.

We don’t use any pesticides on our pasture, controlling brush and weeds with mowing and chopping off blossoms before they go to seed. Our haylage is purchased from local farmers who don’t use spray either.

Many people butcher beef in fall for two reasons:

When it’s time for butchering, you want your animal to still be gaining weight, not losing it. Once the weather turns to cold, more of their energy goes to keeping warm instead of growing. Also try to keep to your routines as much as possible on butchering day, so your animals stay calm. Ask your butcher to hang and age the meet for a full 14 days, provided there is enough of a fat layer to protect the meat. This aging process will produce a much better flavor and more tender finished product.

It’s possible to raise beef on a small scale, though some thought and planning does go into the process. We love knowing exactly what goes into our beef, and the finished product is not only one we can be proud of, but is nourishing to our family. If you’re considering bringing a couple of cows to your farm to feed your family, use this information as your jumping off point. We know you won’t be disappointed with the results.

Melissa K. Norris lives with her husband and two children in their own little house in the big woods in the foothills of the North Cascade Mountains. When she’s not wrangling chickens and cattle, you can find her stuffing mason jars with homegrown food and playing with flour and sugar in the kitchen. Follow her on Pinterest and Instagram: https://www.pinterest.com/melissaknorris/ and https://www.instagram.com/melissaknorris/