As this ancient healer blooms in your garden this month, take time to harvest it for a magical infused oil. 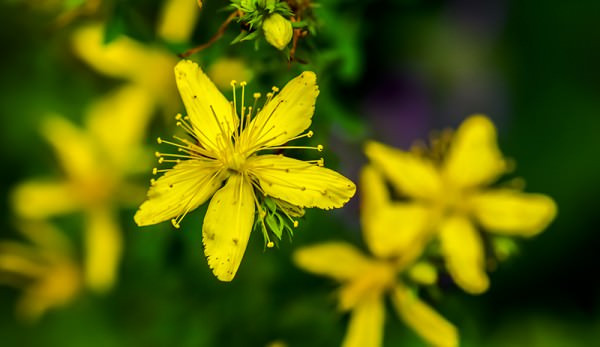 Hypericum perforatum appeared in the work of ancient healers and botanists, such as Theophrastus, Galen, Pliny, Dioscorides and Paracelsus. It has a very long history of being used to ward off the āevil eyeā and protect against illness. This theme shows up in a number of religions from Ancient Greece through the Middle Ages. Before Christianity in England, the flowers were brought into the house on mid-summerās eve. Later, as Christianity spread, the plant became associated with St. John the Baptist. Some claimed that the red spots on the leaves only appeared there after St. John was beheaded, and they believed that sleeping with a sprig of the plant under your pillow the night before the Feast of St. Johnās would guarantee a vision and a blessing. Today, it is still traditional for herbalists to pick their St. Johnās wort for medicine making on June 24 during this annual holy day.

With such an extensive history, it is little wonder that we are still talking about this small, unassuming plant today. All of this human association tells me that there is something special inside this plant that makes it worth our while to pass along generation to generation. In fact, St. Johnās wort contains a few volatile oils and flavonoids. What is more interesting to the scientific community are hypericin and hyperforin, the two compounds that are most studied for mental health. 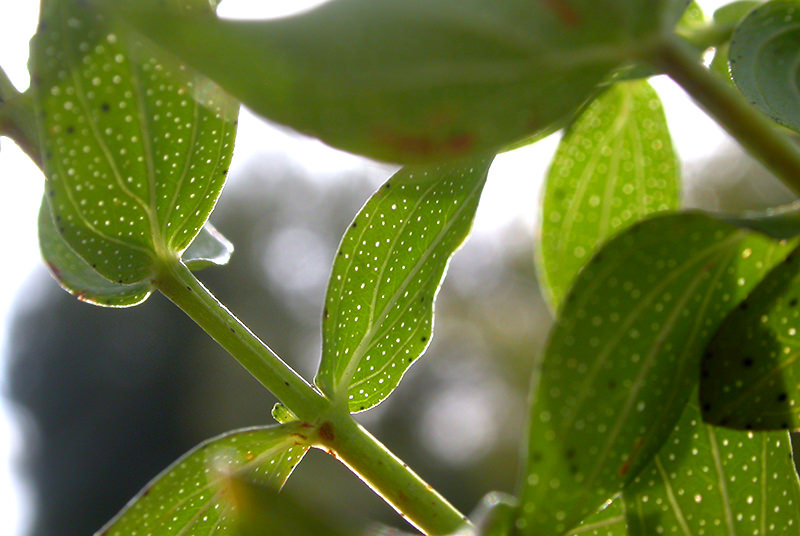 The first time I brought this plant home, I had the idea that it was meant to be tall. When it sprawled instead of standing I was worried that I had bought the wrong species. This is a common misconception. As the plant gets established, it often creeps and stays short. Once it gets its footing though, you can expect the plant to grow up to 3 feet tall.

St. Johnās wort is an herbaceous perennial, hardy to zone 3. It has dark-green, oblong leaves that when held up to the light seem to contain evenly spaced, pin-prick translucent windows. These windows contain the oil for which this plant is famous. The flowers are bright yellow with reddish-purple spots in the throat. When rubbed between the fingers, this yellow flower will turn your fingers a deep maroon color. It likes to grow best from cuttings, which are made from the vigorously spreading rhizomes, though it will grow from seed.

St. Johnās wort isnāt all that particular about the soil where it grows. It is much more interested in sun than anything else you might offer, so plant it somewhere that gets full sun. I have had the plant thrive in a very wet garden as well as in a very dry garden. 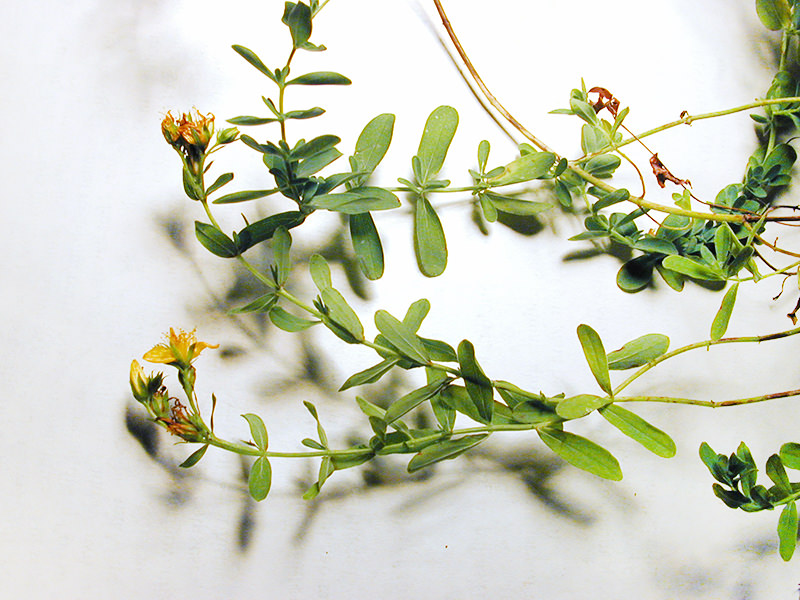 Whether youāre a traditionalist or not,the best time to harvest your St. Johnās wort for its flowers is around June 24āat least in Ohio, where I live. If youāre hoping to use just the leaves you would harvest sometime in the two weeks that precedes that.

If you are harvesting the leaves and stems, you will want to pick on a morning or evening, when the dew isnāt on and the sun isnāt at its peak. Clip the stem off about an inch above the ground and dry the entire stalk on a flat screen or hang it upside down.

If you are harvesting the flower itās still a good idea to try a mid-morning or early evening timeframe for pickingāI prefer mid-morning. Harvest the flower and the first inch or so of stem and leaf below, as all will contain the oil youāre wanting for your remedies. In a perfect world, the flowers you choose will be unopened. This is a bit tricky and just takes time and practice to see. As the flower develops it will get more intensely yellow and more full. Just before it opens is the optimal time to pick. Donāt worry though if the bunch of flowers you pick contains both unopened and opened flowersāit will be just fine.

St. Johnās wort isnāt really a food plantāit doesnāt cross over into the āfood as medicineā category very well. If you want to harvest the plant, and you arenāt just looking for a pretty bouquet, chances are you are making it into some sort of remedy.

The most popular preparation method is St. Johnās wort oil, which is used topically. The leaves and/or flowers are infused in a carrier oil, such as olive or sesame oilāthe process is magical! As the herb infuses, a red volatile oil is pulled out of the yellow flowers and turns the carrier oil blood red. It is just about the prettiest formula I make each year, and I wouldnāt be without it.

If you wish to use St. Johnās wort internally, it can be made into a tea or tincture with either fresh or dried herb. 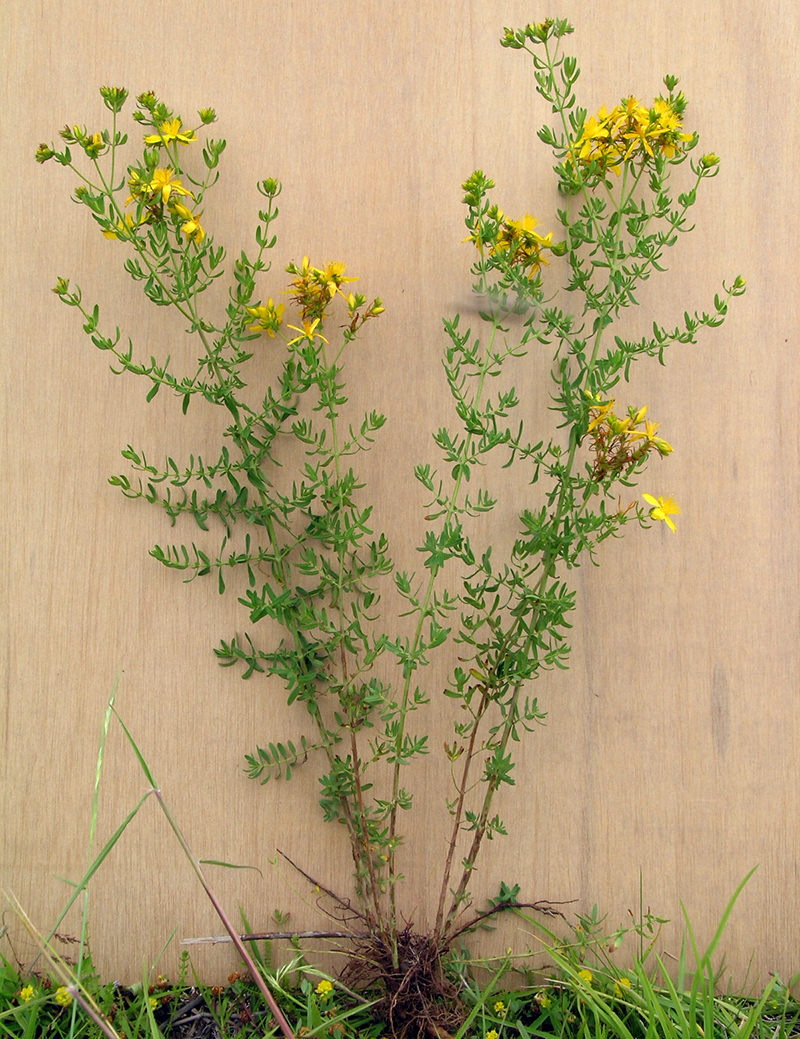 St. Johnās wort is anti-inflammatory that can be used topically for wounds, bruises, varicose veins, sore muscles and mild burns. I have two favorite topical uses for this plant: for sunburn and for nerve damage from disease or blunt-force trauma. Also, when rubbed behind the ear on a daily basis, it can help to repair the nerves that have been damaged in some hearing issues.

St. Johnās wort is also an antibacterial, antimicrobial, antiviral and nervine. Internally it is a superstar with the nervous system. It is a pain reliever and an emotional stabilizer. One of the main uses of the plant has been as a natural solution for depression. The two components hypericin and hyperfolin are the active ingredients in most of the clinical studies.

Are There Any Concerns?

St. Johnās wort got a bit of a black eye some years ago when people became concerned that the plant acted as an MAO inhibitor, but this was shown not to be the case in a follow-up study. There is some evidence that St. Johnās wort can interfere with serotonin levels for those taking selective serotonin reuptake inhibitors, so avoid St. Johnās wort if you are on such a medication.

The only other concern with the plant is really more about some of the other species on the genus. It appears that some of them, when heavily grazed by cattle, can cause photosensitivity in the animals. However, it hasnāt been shown to increase the danger of sunburn in people using the plant in appropriate doses.

My St. Johnās wort plants have a place of honor in my medicine wheel garden. In some areas of the country, the plant is considered a weed and is pulled and sprayed with little awareness of the magic and history that it contains. If you are in such an area, consider yourself lucky, and while you manage your āweeds,ā be sure to make yourself a little magic, as well.