The Birds and Bees—Goat Edition

Today's "Ask Martok" question is something I have a teensy bit of experience with: goat breeding. 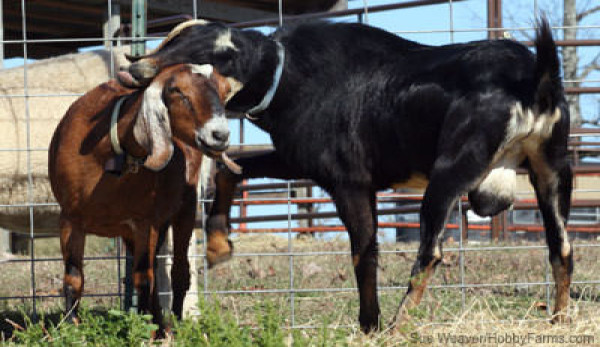 Today’s “Ask Martok” question is something I have a teensy bit of experience with:

Can you describe the breeding process of goats and llamas, as well as leading up to when it actually happens? I have recently purchased some goats I’m interested in breeding this year, and I’m looking into getting alpacas or llamas, too. I’m very confused and the books aren’t very clear. —Abigail

Abigail, that’s a good question. Because I’m a studly buck, I’m going to talk about goats this week, and we’ll discuss llamas and alpacas next week. However, because I don’t have space to tell you everything I know, I asked Mom where you could look for in-depth information. She says Fias Co Farm’s breeding and buck pages are the best. Check ’em out!

When lady goats come into heat depends on their breed. Most does of seasonal breeders, including dairy goats like Alpines, Saanens and Toggenburgs, come in heat every 18 to 21 days from August or September through February or March. Other does, such as Pygmies, Boers and Nigerian Dwarfs), cycle every 18 to 21 days all year round. Some Nubians breed out of season, too; that’s how Jadzia and I made babies in June. Ovulation occurs 12 to 36 hours after heat begins. You can tell when a doe is in heat when she starts strutting her stuff around bucks and wethers, sings loudly and stridently, wags her tail, pees a lot, mounts other goats and is mounted by them, loses her appetite and produces less milk.

A does is stimulated by the charming good looks and enticing scent of a buck. When she’s ready to breed, she stands with her head slightly lowered, her legs braced and her tail to one side, and she’ll probably urinate if another goat sniffs her. This is called standing heat.

This is where we studly bucks come in! When we’re in rut, our scent glands (located near our horns or where our horns used to be) secrete smelly, greasy musk. When we rub our foreheads on a person or object, we’re spreading our scent. We bucks become very vocal during rut, especially when courting a girlfriend. Sometimes we flap our tongues and the sound we make while we do that is called blubbering, but sometimes we also whoop real loud. Bucks in rut are hard to ignore, and the ladies love it! We also spray thin streams of urine along our bellies, on our front legs and chests, and into our mouths and beards until we’re sticky, then we sniff ourselves and flehmen. Flehmening is when an animal curls its upper lip and appears to be laughing, but we’re actually exposing the vomeronasal organ (also called the Jacobson’s organ) in the roof of our mouths and drawing scent toward it—this gives us a better idea of what the smell is than our nose alone. We also do a kind of stiff-legged, pawing goose step with one front leg when we’re excited and some of us spray urine on our friends. I do that a lot when I’m in rut. Mom says it’s perverse when I pee on her, but I think it’s fun! Some bucks also try to breed their human handlers. That can be dangerous. I’m a good boy, so I don’t.

If you breed your doe to a buck that is owned by someone else and you can tell when she’s in standing heat, you can take her there and bring her home the same day. If you have your own buck, just take her to his pen, leave her for an hour or so, and as long as both are eager to breed, that should do the trick. Keep in mind that even though they’re in standing heat, some feisty does might not want to be bred by a certain buck—or any buck at all. Kerla chased Katy, the cantankerous Alpine, for a long time and couldn’t catch her, so Mom took her out of Kerla’s paddock because they were both exhausted. Then Katy came to my pen because it’s smaller and she ran away from me, too. It doesn’t take a studly buck like me long to breed a doe (Dad says don’t glance away from the scene or you’ll miss it), so Dad grabbed Katy’s collar and I jumped on, quick as that, and I made her a set of beautiful twins. Ha, Kerla!

Once bred, most does stop coming in heat and 145 to 155 days after the beginning of her last standing heat, she’ll give birth to one to five cute kids.