The Blueberry: Easy To Grow With A Delicious Harvest

Once a berry relegated to the North, now many blueberry cultivars exist that can be grown across the U.S. 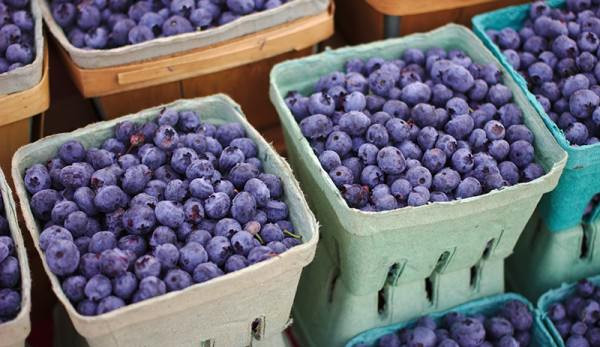 A truly native fruit, blueberries have been enjoyed in North America for thousands of years. Flavorful and rich in healthy antiÂ­oxidants, theyâ€™re a nearly perfect fruit to grow and enjoy at home. Rather than rely on the often tasteless blueberries from the local produce aisle, many gardeners are able to grow high-quality berries around the house or farm. Beyond the delicious harvest, blueberry plants also make a notable addition to your ornamental landscape with striking fall foliage, amazing stem color in the winter months and delicate spring flowers.

The right growing site and proper soil conditions are essential for successful blueberry cultivation. Planting sites need to have full sun, where each bush receives a minimum of six hours of direct sunlight. Itâ€™s critical that blueberries are planted in acidic soil, with an ideal pH between 4.5 and 5.5. Well-drained soils are also needed for blueberry plants, which require access to water but donâ€™t tolerate overly wet roots. Sandy soils with good levels of organic matter are optimal, while soils with heavy clay content arenâ€™t.

To determine if your soil pH and nutrient levels are appropriate for growing blueberries, have your soil professionally tested by a state soil laboratory at least a year before planting to allow time for soil improvement or acidification, if necessary. When submitting soil samples, indicate on the paperwork that youâ€™re intending to grow blueberries, so the lab can provide recommendations for safely modifying your soil. Find your state soil lab using the USDA’s Partners and Extension Map.

If testing reveals that your soil is unsuitable for blueberry cultivation or you are not interested in investing the time to acidify your soil, consider planting blueberries in containers or in raised beds, where you can control the soil conditions from the very start. Acidic potting mixes are commercially available (often labeled as azalea mixes) and are well-suited for growing blueberries.

From Texas to Maine, there are blueberry cultivars that will grow in every region if provided with suitable growing conditions. Blueberry plants are divided into five general types:

Native to Maine and Canada, lowbushes are shrub-like plants that only reach 1 to 2 feet tall and tend to form a thick, low groundcover. Extremely cold-hardy, lowbush blueberries do well in hardiness zones 2 through 6. These plants produce very small berries that are noted for their vibrant, wild taste. There are relatively few lowbush cultivars sold on the commercial market, but some varieties include Top Hat, Brunswick and Burgundy.

One of the most common blueberry types, with more than 100 named cultivars available, mature Northern highbush plants are significantly taller than their lowbush relatives with many varieties reaching between 5 and 8 feet at maturity. This type of blueberry needs a significant number of chill hours to thrive and does well in hardiness zones 3 to 7. Northern highbush blueberries cultivars vary in fruit size but all produce high yields of firm berries in mid- to late summer. Successful cultivars include Jersey, Hardiblue, Spartan and Patriot.

Indigenous to the Southeast, rabbiteye blueberries require very few chill hours and are suitable for zones 6 to 9. Rabbiteyes are relatively easy to grow with few pests and a good degree of drought resistance, and they can handle soils that have a slightly lower Â­organic content than other types of blueberries. Cultivars produce firm sweet berries with a thick skin that keep well after harvest, and they require cross-pollination to produce fruit, meaning that growers need to plant at least two different cultivars. Some popular rabbiteyes include Climax, Tifblue, Brightwell and Beckyblue.

Half-high blueberries are the result of a modern cross between lowbush and Northern highbush varieties and produce a compact, cold-Â­hardy blueberry bush that is suitable for zones 3 through 7. These sturdy bushes are meant to handle a high snow load, with most cultivars only reaching about 3 or 4 feet tall. While berry production is lower than the highbush varieties, the quality of the berries Â­themselves are very good with great flavor, color and shape. Successful half-high cultivars include Chippewa, Polaris, Bluegold and Patriot. As an added bonus, half-high cultivars are suitable for Â­container growing.

When trying to select individual blueberry cultivars, itâ€™s a good idea to speak to experts at your county extension office or a locally owned garden center to find out which varieties are most successful in your area. Beyond the ability for viable cultivation, potential growers also need to consider factors such as:

Blueberries can either be purchased as young, Â­bare-root starts or as mature container-grown plants; the latter option is often better for small-scale Â­blueberry growers, as bare rootstock has a higher failure rate and will take many years before the plants are mature enough to bear significant fruit, despite being the cheaper option. Nursery stock in containers, while expensive, is often more successful due to the larger root system of the older bushes and will provide a harvest several years sooner than bare-root starts.

No matter your choice of blueberry stock, bushes should be planted while dormant in the early spring. Prepare the planting site the summer or fall before by removing any weeds and shallowly cultivating the soil and adding in organic compost and other necessary soil amendments recommended by soil testing lab.

Space bushes a minimum of 4 to 6 feet apart with 10 feet between rows. For continuous hedgerow plantings, highbush and rabbiteye blueberries can be planted a little closer at a rate of 3 to 4 feet apart.

When planting container-grown berries, dig a shallow hole about two times the size of the root mass.

If the root system is heavily root-bound, gently roughen up the exterior of the root mass and place the plant in the hole at the same depth that the plant was grown in the container. Mix some peat moss with the excavated soil, and replace the blend around the new plant. If using bare-root starts, soak the roots for an hour before planting, spread the roots in the hole and make certain the blueberry is Â­planted at the same depth it was grown. You can look at the stems for a color shift that indicates that depth.

After planting, water each of the blueberry bushes well and add 2 or 3 inches of acidic mulch, such as pine needles or pine bark chunks, around the plants, but not directly around the stems. Mulching is important because it cuts down on weeds that compete with the blueberries for nutrients and water, keeps the soil moist and helps to gently acidify the soil as the mulch breaks down. Plan to replenish this mulch every year at the same depth.

Most blueberry plants in optimal settings need 1 or 2 inches of water per week during the growing season. Because blueberries have shallow root systems, they need uniform watering or fruit size and yields will suffer; soaker hose systems are advisable to ensure even levels of watering. If your blueberries are in containers or raised beds, be sure to continually monitor water levels, as plants tend to dry out much sooner in aboveÂ­ground environments.

Pruning is essential for maintaining and increasing fruit yields from blueberry bushes. After a blueberry plant has been in the ground for three or four years, itâ€™s time to start pruning the bush to encourage new growth and allow light and air to pass through the center of the plant. The easiest method is to remove one or two of the oldest canes every year after the bush has matured and to cut back any dead or damaged branches in the process. Pruning should be done during the winter dormancy unless you are removing diseased canes during the growing season.

This schedule applies to most types of blueberries, with the exception of lowbush berries, which are typically mowed down every few years to maintain production. In addition to pruning, consider removing the flowers from your bushes the first year or two to prevent fruiting and encourage your plants to develop a stronger root system, which will lead to higher yields in the future.

Fortunately, blueberry bushes are relatively free of major diseases and pests in most growing regions, and this is especially true for small-scale growers compared to commercial operations. Of the diseases that do strike, theyâ€™re commonly fungal in nature and include mummy berry, which causes the berries to shrivel up and turn gray while turning leaves and new shoots brown, and a number of fungal canker diseases. Mummy berry can be controlled by clearing branches and dropped fruit from beneath the bushes each fall. Bad infestations can be treated with commercial antifungal sprays.

Pest-wise, the greatest threats faced by all blueberry growers are birds that eat ripe or nearly ripe fruit in abundance.

Harvest berries a few days after they turn fully blue to maximize flavor. After harvesting, they should be stored unwashed in the refrigerator, where they will last seven to 10 days when stored in sealed containers. Blueberries are also great for freezing or drying to allow you to enjoy your harvest all year long. When freezing them, spread unwashed berries out in single layer on a rimmed baking sheet and place in the freezer. Once the berries are frozen solid, transfer the fruit to a labeled freezer bag and remove as much air as possible before sealing. Blueberries frozen in this manner can last up to two years with the proper conditions.

A relatively trouble-free crop, blueberries are worth the initial investment of time and money. That first bountiful harvest of delicious, fresh blueberries eaten straight off the bush or in a bowl of cream is simply amazing. And if the plants are pruned and well cared for over the years, many blueberry cultivars will continue to produce fruit for decades to come.

This article originally appeared in the March/April issue of Hobby Farms.