This invasive pest was introduced to the U.S. in the 90s and the damage it’s caused has reached epic proportions. 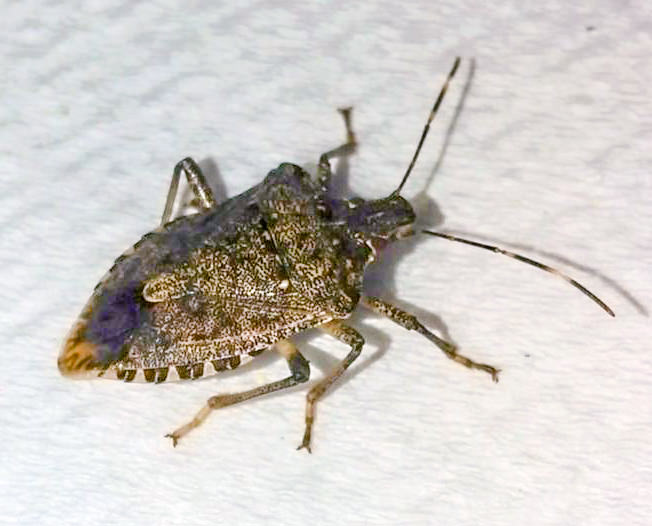 The brown marmorated stink bug is an invasive pest from Asia that is a growing threat to commercial and hobby farms in North America. The first was initially reported in Pennsylvania in the late 1990s and likely arrived via shipping containers either from China, Korea or Japan, the native homeland of this pest. Over the last two decades, its population has spread like wildfire, becoming established in nearly half of the United States and even in some southern portions of Canada. Its quick spread is due to a low rate of natural predators in North America and an abundance of suitable food sources —the perfect scenario for the success of any invasive species.

Identifying this stink bug species can be tricky, as there are also several native stink bugs, such as the brown stink bug or rough stink bug, which have similar coloration and physical features. Like most stink bugs, adult brown marmorated stink bugs have shield-shaped bodies, and they reach from a 1/2 to 5/8 inch when fully grown. The word marmorated refers the streaked, marble-like appearance of their brown bodies, and you’ll also find a black-and-white banded border on both sides of the rear half of the abdomen. When comparing this species to similar looking natives, look for alternating light and dark bands on the antenna, which is unique to the Asian insect, and a brownish-gray or white underside with no green hues. Additionally, the front of the head is more blunted than that of its native relatives, and it has smooth shoulders with no small spines or sharp corners.

Damage In The Garden

The brown marmorated stink bug feeds on a wide range of fruits and seed pods and has long been a pest in Asia. Upon arriving in North America, it encountered a multitude of acceptable host plants in local gardens and orchards, being particularly drawn to these crops:

It’s also attracted to a wide range of ornamental plants. The damage depends on the individual crop, but their feeding on fruit often causes pockmarks and distortions to the skin, making the fruit unmarketable and causing the flesh underneath to become hard and pithy. Secondary infections are also quite common in fruits and vegetables after feeding occurs.

Brown marmorated stink bugs are an important crop pest, and much work—including that of StopBMSB.org—is being done to control its spread. Have you encountered a stink bug problem in your garden? Let us know what you’re doing to keep it under control.