The Case Of The Missing Eggs

One keeper enlists the help of expert chicken detectives to figure out why she’s short on eggs in the nest boxes. 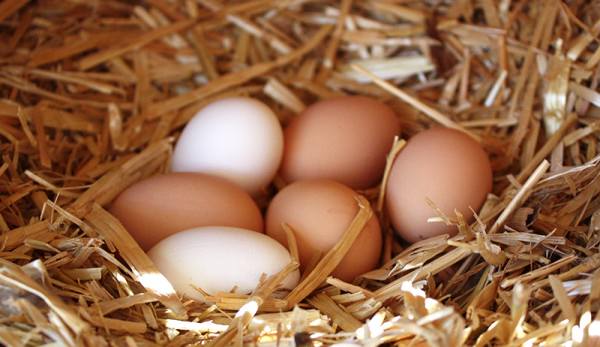 Zeus welcomed the morning with a cacophonous “cock-a-doodle-doo” as the sun peeked between the hillside horizon and a thick layer of cloud cover. “Rise and shine,” he cackled. It was time to wake up the chickens, so I pulled on my muddy muck boots, grabbed my worn egg basket and headed to the henhouse. I opened the coop door and off dashed the flock, spreading their wings, eager to gobble as many earthworms as they could find. When I checked the hens’ nest boxes, the egg count didn’t add up—again: eight hens, five eggs. For the second week in a row, three eggs that should have been there weren’t. Something wasn’t right.

By all accounts, these Plymouth Barred Rocks were happy, healthy birds. Just over 1 year old, they were reliable layers. They ate organic chicken feed, free-ranged around the property and enjoyed as much natural forage as they could find. Their uber-secure henhouse kept out the wiliest of egg-thieving varmints. So where in the world were those missing eggs?

To solve this mystery, I enlisted the help of Bruce Webster, extension poultry scientist with the University of Georgia; Theresia Lavergne, Louisiana State University AgCenter poultry specialist; and Phillip Clauer, poultry extension specialist with Penn State Extension, all of whom know a thing or two about chickens. These experts helped me sleuth the clues and deduce the cause, while also suggesting ways to remedy the situation—unless Mother Nature was involved, that is!

From October through February, when the hours of sunlight are at their lowest, hens will slow or even stop producing eggs. It’s how their cycles naturally work, and it’s the most common reason why chicken-keepers find empty nest boxes.

“The reproductive state of birds is regulated by the amount of light they receive each day,” Lavergne says, noting that hens require at least 14 hours of light to maintain egg production. “Hens are stimulated to lay eggs when day length increases and reduce egg laying when day length decreases.”

“Maintain a constant day length of at least 14 hours per day,” he says. “One 40-watt light for each 100 square feet of coop is adequate. The lights should be added in the morning hours so the birds can go to roost as the sun sets.”

What’s On The Menu?

If hours of sunlight aren’t the egg production issue, it’s time to hunt for other clues. Lavergne first points to the ladies’ eating habits. Are they getting a balanced diet with plenty of fresh, clean water to wash it down?

“It’s important to provide a nutritionally balanced layer food to your hens to ensure that they will have adequate levels of protein, calcium and energy to maintain production,” she says. “Also, providing oyster shell to your hens will help maintain strong eggshells.”

Hens need a lot of calcium. Consider this: The shell of each egg contains roughly 2 grams of calcium, and the skeleton of typical modern egg-laying breed has about 20 grams of calcium. Each egg represents 10 percent of the hen’s total bodily calcium.

“While the hen’s skeleton acts as a -calcium reserve to supply the demands of egg production, this reserve is rapidly depleted in the absence of an abundant calcium source in the feed eaten by the bird,” Webster says. “In such a situation, the hen will stop laying eggs.”

Commercial layer rations are designed to be nutritionally balanced for laying hens. Look for a blend that has 16 to 18 percent protein, according to Clauer, and you must use caution when using diet supplements. “Feeding whole grains, scratch feeds and table scraps will cause the birds’ diet to become improperly balanced,” he says.

Disease is another cause of reduced egg production.

“Disease problems can occur under the best of conditions,” Clauer says. “Often one of the first signs of disease is a drop in egg production. Other symptoms of disease include a dull and listless appearance, watery eyes and nostrils, coughing, molting, lameness, or mortality in the flock.”

Symptoms of illness will often be present, but sometimes they will not, Webster warns.

“If a disease is suspected, it is important to consult a poultry veterinarian without delay,” he says. “A timely diagnosis may allow effective treatment for some diseases. In the case of certain virulent diseases, like highly pathogenic avian influenza, a speedy diagnosis may prevent losses of whole flocks in entire regions, and minimize the risk of zoonotic transmission of deadly disease from chickens to humans.”

To protect yourself and your flock against disease, introduce new chickens wisely. “If you wish to increase your flock, buy chicks from a reputable hatchery or hatch some of your own eggs,” Clauer says. “Adult birds can look healthy and carry diseases. That’s asking for trouble.”

Sometimes, a hen turns broody, which means she wants to raise some chicks. She’ll sit in her cozy nest box on a clutch of eggs and scold anyone who disrupts her, sometimes with a sharp peck! This clue is a pretty clear one.

“When this happens, they stop laying eggs,” Webster says. “They are more likely to become broody if they are allowed to accumulate eggs in a nest. The problem is most prevalent during spring under natural daylight as the hens come into production due to the stimulating effects of increasing day length.”

To prevent this problem, Webster advises collecting eggs at least once a day.

“Daily egg gathering is also an important practice to preserve the safety and quality of eggs for human consumption,” he added. “If your housing facilities permit, hens can be moved to different living quarters periodically to disrupt their attachment to specific nesting sites.”

A hen can live for many years—8 to 10 or more, in fact—but as hens age, they eventually lose their ability to produce eggs.

“Hens can lay efficiently for two laying cycles,” Clauer says. “After two or three years, however, many hens decline in productivity. This varies greatly from bird to bird. Good layers will lay about 50 to 60 weeks per laying cycle. Between these cycles, they’ll be interrupted by a rest period called a molt. Poorer layers and older hens will molt more often and lay less.”

To keep track of your hens’ ages, experts recommend looping a different-colored leg band on each chicken based on when it was introduced to the flock. “It’s not unusual for a backyard flock owner to keep several generations of birds and lose track of how old some hens are,” Webster says.

Cooler fall temperatures and declining sunlight hours often trigger hens to molt, which is when they shed their old feathers and grow new ones. You’ll know when molting happens; your chickens will look like disheveled little feather dusters with bare patches and plumage in various stages of regrowth. Hens can’t molt and lay eggs simultaneously, Webster says, so egg production stops when those feathers fly.

“After a hen has been producing eggs for several months, she becomes increasingly likely to molt,” he says. “Molting and egg production are not mutually compatible, so when molting occurs, egg production ceases. The rest from egg laying allows the hen to restore its plumage condition by shedding old feathers and growing new ones. At the same time, the hen’s reproductive tract is rejuvenated, allowing it to increase its rate of egg production and produce higher quality eggs when it returns to lay.”

Molting is a natural occurrence, so it’s going to happen. When it does will depend whether you keep your ladies under an artificial light during the winter.

“Under natural day lengths, molting tends to coincide with the change in season so that hens molt in the fall after they cease egg production due to shorter days,” Webster says. “In these circumstances, it is normal for all the hens in a flock to go out of production and molt more or less in synchrony. However, if artificial lighting is provided, a hen may molt at any time of year and not in synchrony with other hens. If this happens, she should return to lay in several weeks.”

Stress affects your hens’ laying cycles, too. Sketchy situations that could spook your ladies include any moving, handling, environmental changes or predator threat, Clauer says. Prevent these common stressors if at all possible.

Henpecking In The Henhouse

Too many hens and not enough nesting spots can cause egg-production problems, too, notes Clauer. Bossy hens may peck at eggs or chase others away from nest boxes, forcing them to lay elsewhere. Some may get a taste for eggs and start cracking eggs and eating them.

“If egg production is decreasing, you may need to consider the possibility of predators consuming the eggs, egg-eating by the hens themselves or egg breakage,” Lavergne says. “The hens may also be hiding the eggs if they’re able to run free.”

With the riddle still perplexing, I considered these expert clues and realized Lavergne had the answer: My three free-ranging trouble-makers had sent me on my own Easter egg hunt! The hens, it turns out, were laying their eggs in their own homemade nesting spots beneath a newly built deck yards away from their henhouse.

The mystery was solved!

After a little convincing—and letting them out of their henhouse at noon rather than sunrise—I coaxed them back to their proper nest boxes. Because most hens do their laying in morning, they had no choice but to use what was in their pen.

Missing eggs can be a mystery, but it can be solved with a little sleuthing … and by thinking like a chicken.

This article originally appeared in the May/June 2016 issue of Chickens.

Author of nine books and hundreds of articles, Wendy Bedwell Wilson has been a freelance writer and editor for 12 years. She writes about pets, farming and healthy living from her 80-acre hobby farm in southwestern Oregon, which she shares with her husband, three rescued dogs—a retired racing Greyhound named Song, a hound mix named Pete, and a Chihuahua mix named ChiChi—a feline mouse hunter called Cleo, and a barnyard of farm critters.