The Changing Color of Chickens 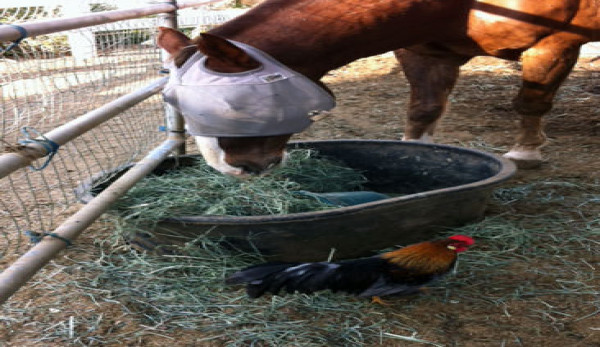 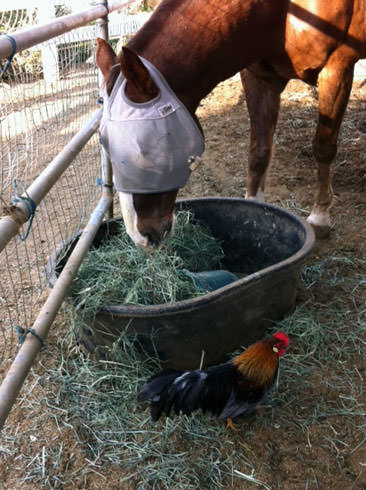 Liberty hangs out with Teddy the horse, showing off his beautiful colors.

I remember when Liberty was born last spring; he was one of three chicks, and was white as snow. I first saw him one night when he was huddled against a rock in the coop, peeping in distress. I didnâ€™t even know the eggs one of my hens was sitting on had hatched. I reached in and picked him up, then put him under the hen. Iâ€™m sure I saved his life that night. He had no clue how to get back to his mom, and he wouldnâ€™t have survived the cold.

His color excited me. His mom was a blue leghorn, and his dad was either my black and white rooster or my orange and black one. But here, this chick was all white! His other two siblings were black and grayish. I thought for sure this little one would grow up to be a white hen â€” perhaps a throwback to some white ancestor. After all, his sire was a mixed breed. Who knew what colors were behind him?

Within a couple of weeks, it became obvious that the little white chick was not going to grow up to be all white. His body changed to a medium-gray color, while his head stayed white. He looked like a little bald eagle running around the yard. I couldnâ€™t get over it! I named him Liberty.

Of course, at this point, I still thought he was a hen. I thought all the chicks were hens because I was trying to manifest it. I didnâ€™t want any more roosters, so I hoped I could just will them all to be girls.

So I watched Liberty grow, gradually changing colors yet again. Although he stayed gray with a white head for a couple more weeks, it wouldnâ€™t last. Eventually, his head turned dark, too and he was just a muddy gray.

But then suddenly, he began to blossom. It seemed like overnight, his head and ruff turned bright orange. His comb and wattles glowed red, and his earflaps contrasted starkly against his face. His tail feathers grew out, and were black with green highlights. I realized I not only had another rooster in my midst, but a pretty good-looking one at that.

Today I watched Liberty try to sneak bits of rice bran from Teddy, a horse, during lunchtime. The sun was hitting his feathers just so, and he seemed to glow. Although my dream of having a white hen â€” or a hen that looked like a bald eagle â€” went out the window, I ended up with handsome rooster Iâ€™m proud to call mine.