Local cheese-making courses are a great way to expand your dairy knowledge and meet new people. 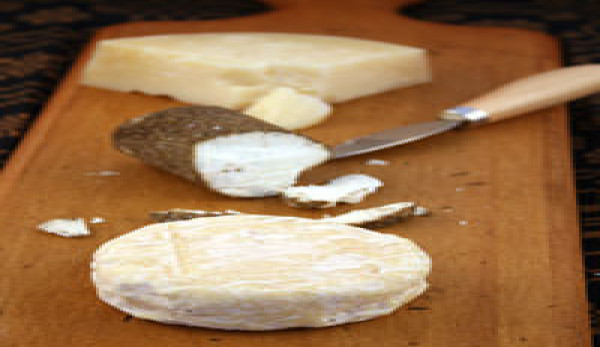 It all started a few years ago, when, without any particular goal in mind, I was searching my localÂ newspaper’s events listing and saw it: Saturday morning tours of Harley Farms, a goat farm tucked away in Pescadero, Calif., where visitors can cradle nearly newborn kids and find out how this small, family farm produces its award-winning goat cheese.

I’d always fancied myself a bit of a farmer–just without the farm, the animals and those early mornings–so I went.
Â

If you’d told me then that two years later I’d be springing for a three-day farmstead cheese-making course, I would have smiled tolerantly at you and walked away.

But here I am, a proud graduate of the Glen County Cooperative Extension’s farmstead cheese-making course (class of 2005), held annually in Orland, Calif. I learned more about the microbiology of cheese than I ever wanted to, not to mention the sizeable financial investment of going into the small-production cheese-making business.

Like many city and suburban folk these days, I find myself increasingly drawn to country life and the idea of raising an animal larger than my mixed-breed terrier, Madge.

Maybe it comes from spending most of my life either near or in the city that makes me sigh every time I pass a herd of cows on the highway; or the feeling that my priorities are a little clearer when I’m tasting fresh chevre from the goats I visited in the pasture–or the fact that when it comes to dairy products, I just can’t say no.

These were among the many motives that found me making the more than three-hour drive from my home in San Francisco to the small-farm town of Orland in California’s Sacramento Valley.

Cheesemaking In a Nutshell
For three days, I sat in a classroom with eight other students from widely different backgrounds.

There were the goat farmers, a small group representing the retail cheese market, an animal science professor and a dairyman, who was considering a move into cheese making.

And then there was me, with my Day-Glo orange boots purchased expressly for the occasion, qualified only by my love of cheese and the dream of one day raising a few goats.

We started with the fundamentals of cheese microbiology and an introduction to factors that affect milk composition.

Our second day began with a local field trip to Pedrozo Dairy and Cheese Company, where we got to assist Jill Pedrozo in making her family’s signature Northern Gold cheese, a raw-milk, aged round that resembles a dry Gouda.

Back in the classroom, we covered sanitation, hygiene and cheese aging, as well as how to create a business plan and market a cheese business.

Another site visit brought us to the Sierra Nevada Cheese Plant, a larger operation than the Pedrozo’s small, family farm.
Â
We then capped the course off with a cheese tasting and a discussion of the factors that influence the extraordinary range of cheeses available.

By day three, the cheese course communicated quite clearly what most hobby farmers already know: The farmstead cheese-making business is hard work.

After completing my course, I decided to stick to the safe pastures of my own kitchen, which is precisely where a growing number of cheese-making enthusiasts–urban foodies and hobby farmers alike–are learning their craft. The following is a bit of what I learned from the course.

Cheesemaking 101
You don’t need to build a commercial kitchen or raise your own goats to start making cheese at home.

The most basic soft cheeses can be made in a matter of hours; aged cheeses, such as Gouda and Cheddar, can also be made in your kitchen and consumed after a proper period of aging. Fresh milk from your cow or goat can be used as the French do–raw; they credit the naturally occurring bacteria in raw milk for its flavor. However, it’s illegal to sell raw milk in most states because of potential contamination.

Dee Harley, owner of Harley Farms, advises that while raw milk is fine to work with, “it has so many more variables, particularly in the handling. If you don’t keep it cold, bacteria will start to grow and by the time you get to cheese making, it will be a curdled mess.”

If it’s too yeasty it won’t work either.
Â
“Pasteurized milk is good to start with because you’ve eliminated those variables and have more control over the outcome,” advises Harley. The keyword is caution; the safest bet is to work with pasteurized milk.

The following provides the basic steps and components for making most cheeses. For specific recipes and ingredients, consult edited and tested recipes published in cookbooks or online for the best, safest and most efficient results.

Cheesemaking Equipment
The basic equipment you will need to make cheese includes:Â

Extra supplies, such as cheese molds and a cheese press, are optional, depending on the kind of cheese you’re making.

The Cheesemaking Process
The foundation of cheese is, of course, milk. From sheep to goat to cow, just about any kind of milk will do; even a combination of instant dry powder and cream, says Ricki Carroll, owner of New England Cheesemaking Supply.

The exception is ultra-pasteurized milk, which generally doesn’t produce a firm enough curd for making cheese. Skim or low-fat varieties can be used, but with less fat sometimes comes less richness of flavor; cheeses made from low- or non-fat milk tend to be dryer and harder.

Once you’ve warmed the milk to a desired temperature (according to your specific recipe) on the stove, add a starter.
Â
The purpose of the starter is to produce acid and enhance the flavor of cheese. You can use a simple starter, such as white vinegar, to make cottage cheese or you can purchase a starter culture, which is a bacteria culture you add directly to the milk, to make more complex cheeses.

The next step is to add rennet, which will clot the milk into curd and separate it from whey–a yellowish, clear fluid that you can drain off or keep to make whey cheese.

Curd usually forms in about 30 minutes; depending on the type of cheese you’re making, you may continue to heat the curd.

After the curd has set, use a knife to cut the curds into smaller pieces to further expel the whey. The size of the curds will vary, as you might expect, by the type of cheese you’re making.
Â
Harder cheeses will come from curd cut into smaller pieces, while soft cheeses will be made from larger pieces of curd that retain more whey. At this point, press the curd into molds or cook it a bit longer to achieve a wide range of different effects.

Most will eventually undergo salting for flavor and to inhibit the growth of bacteria; some will be ripened and aged in climate-controlled conditions.

Behold the Popularity of Cheese
When it comes to cheese making, Ricki Carroll has taught thousands how to do it at home.

Owner of New England Cheesemaking Supply and author of the popular cookbook Home Cheese Making: Recipes for 75 Delicious Cheeses, Carroll’s role in bringing small-production cheese making into the home kitchen began some 30 years ago when she started looking for books on how to make cheese with the milk her goats produced.

“I couldn’t find any information on how to make it at home or on a small scale. At the time, nobody was making cheese.”

Her search eventually brought her all the way to England to study cheese making with a family who made it from their cows’ milk.

Just before leaving the states, though, her former husband advertised their cheese-making supply catalog in the Dairy Goat Journal. For 25 cents, the cheese curious could purchase a list of items for manufacturing cheese at home.

When they returned from England, their mailbox was full of quarters.

“That’s when we thought maybe there was an interest,” says Carroll. So in 1978, they officially opened New England Cheesemaking Supply, selling cheese-making kits, equipment and courses.

Carroll’s first class included six students, all of whom went on to become commercial cheesemakers. Now she specializes in teaching beginners; some of her classes draw up to 80 students. In fact, they’ve become so popular that she hasn’t had to advertise in eight years; she’s currently expanding the home kitchen where she teaches to accommodate as many as 40 students.

“People want a gentler lifestyle, and they’re more into food now than they used to be because of traveling and tasting new things, like artisanal cheeses,” she says.

For many, Carroll’s courses also offer a social and creative outlet.

“Cheese making is a family activity; one that brings together mothers and daughters and friends for an afternoon in the kitchen,” she says. Carroll is even thinking about starting a singles night to bring cheese enthusiasts together.

Likewise, Dee Harley sees the interest in cheese making as part of a broader change in the way people think about their relationship to the land and to the animals that produce their food.

“People are just more interested in where their food comes from,” she says. “They want to buy food that’s closer to home and they want to be healthier. They want a relationship with their food.”
Â
Harley credits farmers markets and the Slow Food movement for contributing to the interest in cheese making. The movement takes as a major part of its mission “a recognition of the strong connections between plate and planet.” More than just a culinary mantra, this sentiment serves as a foundation for an environmental philosophy that’s becoming popular with many who see the farm and farmstead ways as symbols of relationships among dependent ecologies.

Advice fromÂ Cheesemaking Pros
The differences between a commercial dairy and a small kitchen are not that big, according to Dee Harley, at least in terms of the principles that guide cheese making.

“You have to respect the natural integrity of the land and the animals that produce the milk you use to make cheese.”

When it comes to getting started, she recommends using a cheese-making kit and beginning with a simple mozzarella or chevre.

Third-generation dairy farmer Tim Pedrozo of Pedrozo Dairy and Cheese Company adds, “Keep things clean. Your top priority is to make sure you sanitize everything.”

Ultimately, though, he says, “you have to be patient because things might not taste the way you think they should the first time. Some home recipes rely strictly on time, but this method doesn’t take into account variables such as milk quality; that can make a big difference in the way your cheese tastes.”

For a commercial cheesemaker like Pedrozo, a pH meter is a necessity for keeping taste consistent, but isn’t a requirement for the novice. Above all, says Harley, “Keep it fun. If it’s not a joy, then it’s not for you.”

About the Author: Kristen Kennedy is a teacher, writer and cheese enthusiast living in Seattle.