Mel Combs from the Idaho-based Combstead tells us all about the therapeutic benefits of being surrounded by poultry and working with family. 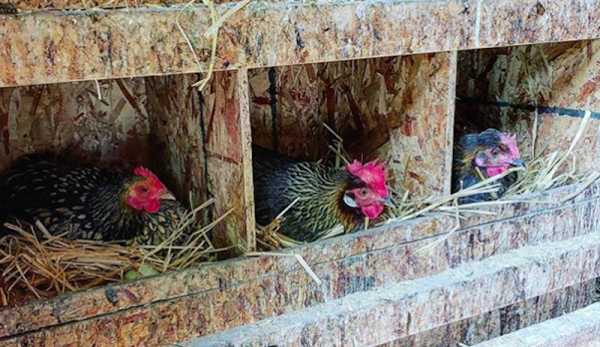 Mel Combs’s urban hobby farm was founded when she and her husband felt “a desire to just have space.”

Named The Combstead, the Caldwell, Idaho-based venture took off when she brought in some goats to keep the grass in the pasture low. Then she added chickens and a garden.

“It seemed like the lifestyle chose us, but we definitely didnâ€™t argue,” reflects Combs. She shares her farming experiences with the world via her popular Instagram account.

Taking time out from tending to the chicks, we spoke to Combs about the challenges to overcome when taking up urban farming. We also discussed the rewarding nature of running a family farm. Finally, we touched on the therapeutic benefits of living with chickens.

Combs says that workload is the greatest challenge when tackling urban farming.

“We moved from an acre to five, and although our property is not that big in the grand scheme of a homestead or urban farm, the workload truly did multiply itself by five,” she explains.

“Sounds like common sense, but I donâ€™t know if we were actually ready for that. The idea that there are no off days came quick. Because if you tell yourself youâ€™ll do it tomorrow then when tomorrow comes, you will be even more behind than just the one day.”

As a solution, Combs says she and her family started to spend an extra 30 minutes a day working beyond their usual chores.

“There is always something that needs to be built, weeded, cleared, harvested, mowed, cleaned or planted,” she says. “Those 30 minutes a day really help us stay on top of things and also not get burned outâ€”which in turn has helped us stay motivated.”

You can have goats in many urban areas, but ask yourself these questions first.

Raise your hand if you're laying a egg. Ooookay… are you all just broody? ??

Chickens form a key part of The Combstead. “They are perhaps the most demanding animals we have,” reveals Combs.

“Not in a high maintenance way, but in a how dare you come out here to do chores and not bring us a treat buffet? When the chickens see us coming, they all run for the gate to greet us. When we are treat-less, you can almost feel the birds roll their eyes and walk away in disappointment!”

Combs adds that the chickens on The Combstead are “a great source of therapy.” She characterizes them as “calm and curious” and says she’ll often spend her post-chores time “sitting on the ground or an overturned bucket just watching them peck or dust bathe or just be.

We're trying the frypan bargain from @meyer_hatchery this time around, and also got 5 turkeys. This sight never gets old. ??

When it comes to raising chickens, Combs maintains that the biggest lesson she’s learned on The Combstead is to simply watch the chicks.

“Youâ€™d be amazed how many issues can be stopped early or prevented altogether if you just take a couple minutes each day to really watch each chick,” she says.

“How are they walking? How are their eyes, beak and vent? Are they eating and drinking fine? How is their energy level? By paying attention and knowing the signs, you will have a much happier and healthier batch of chicks.”

With urban chickens, you can bring some cluck to the city.

Another warm day today, so everybody is heading to their favorite spot in the chicken tree to keep cool. ? I am so thankful our girls have this big tree, it's definitely their home base. ??

If you follow The Combstead’s social media accounts, you’ll have noticed that the farm’s chickens have reclaimed a tree on the property as a hang out spotâ€”which has now been named the Chicken Tree.

“Before we even decided on a chicken coop design, we had to figure out where we would put it,” says Combs, explaining how the Chicken Tree came to be.

“We knew our birds would be 100 percent free range, but we also wanted their coop close and easily accessible by us; we wanted lots of shade for the birds and some sort of protection.

“The Chicken Tree is an old Russian Olive that was all alone along the fence that divides our side paddock from the main pasture. It was also right by the irrigation pipes that feed our pasture, so we knew that equaled one other thing that chickens loveâ€”bugs!”

After situating the chicken coop there, Combs was pleasantly surprised to find the chicks adopting the tree.

“All the birds use it as a perch. It offers valuable shade in the hot summer days, filters and lessens snow fall in the winter, the trunk that lies along the ground is a fantastic wind block and weâ€™ve even seen it used as an escape from hawks and eagles that have tried to get a free meal,” she says.

“To see them using their natural perching instincts is the greatest reward of all.”

Planting four varieties of dry beans, two kinds of green beans, and some soybeans today. It's a bean kind of day, apparently! . I took the day off from my "real" job today, and am getting a ton of things accomplished around the mess that is our place! ? What are you up to today?

“It may be clichĂ©, but I truly think the most rewarding thing about running a family farm is the sense of pride in a simple meal,” says Combs when asked to sum up the joys of family farming.

“Seeing all of your hard work come across the dinner table is remarkable. There are several months of the year when everything on our plates was raised or grown by us. We also spend a great deal of time canning, freezing, dehydrating and preserving our bounty.

“That means the feeling of accomplishment can continue throughout the cold, bare winters. It leaves you with an undeniable sense of excitement and curiosity for what is next.”