Laura Cox from the Tennessee-based agricultural cooperative Cox Homestead tells us how overcoming a bout of the flu led to inventing one of her venture's most popular products. 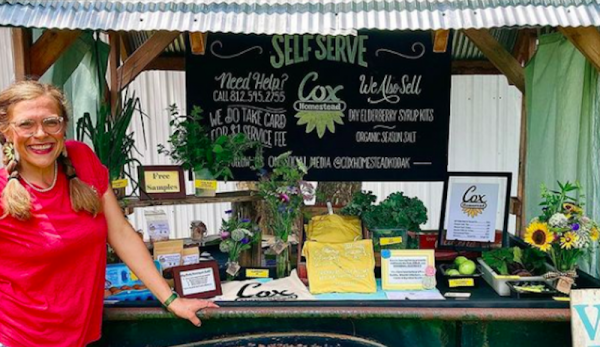 When Laura Cox looks back on her childhood, she remembers her family always having a garden. “My mom wouldn’t let me have any animals, so I always knew when I grew up I wanted to get into homesteading and farming,” says Cox, who now runs the Cox Homestead in Kodak, Tennessee.

Along with selling produce and flowers from a bespoke farm stand, Cox Homestead has also become renowned for its do-it-yourself elderberry syrup kits, which Cox formulated after using elderberries to beat a bout of the flu.

We spoke to Cox about the rewards of growing your own produce and the best ways to use elderberry syrup. We also got the scoop on Cox Homestead’s resident feline on the prowl.

The Key to Staying Motivated

When it comes to running a homestead and farm stand, Cox admits that it’s “hard work” that needs taking care of “even when it’s hot and rainy or whatever the weather is.” To stay motivated, Cox finds a sense of fulfillment in seeing the process through to completion.

“It’s easy to compare, like I can can tomatoes or I can buy them in a store for a dollar rather than spend however many hours it takes,” she explains. “But just knowing that I grew it and I made it myself keeps me motivated.”

Cox has successfully set up a farm stand to sell the Cox Homestead’s produce and flowers.

“Last year was my first year doing it, and I thought it did well. But this year’s been even better,” she says. “I think building an online platform and presence has really helped to get the word out about it too.”

Read more: You can use these herbs to help fight the flu and cold viruses.

“When I had my first son, I caught the flu for the very first time ever. He was 6 weeks old, and I was a brand new mom and sick as can be,” Cox recalls. “I went to the doctor and he gave me a prescription and told me I couldn’t nurse my son.

“I was so confused by all of it and it wasn’t long after that I learned about elderberries and how they’re so good to cut off the flu and help the immune system.”

Eventually, Cox began to sell her own elderberry syrup, which in turn paved the way for the creation of dried kits. “I used to sell syrup until the business grew and I couldn’t handle it. So I switched to the dried kits,” she says. “It lessens the workload for me, but it also allows people to have a part in making it themselves.”

When it comes to Cox’s recommended use for elderberry syrup, she likes adding it to berry teas as a flavor enhancer and sweetener. She adds that her kids love to use elderberry syrup in homemade popsicles, too.

Read more: A spoonful of elderberry syrup kicks the winter off right!

If you take a look through the Cox Homestead’s Instagram account, you’ll notice frequent cameos from a dashing feline. It turns out he’s called Mr. Honey.

“He is one happy catâ€”this is his jungle!” says Cox. “He’s always finding things to capture. He also gets along with the rabbits too, but I don’t leave them unsupervised. They’re actually playmates at times!”