The Crucial Role Of Nurse Bees

Caring for the brood—the next generation of honeybees—is something that nurse bees take very seriously. 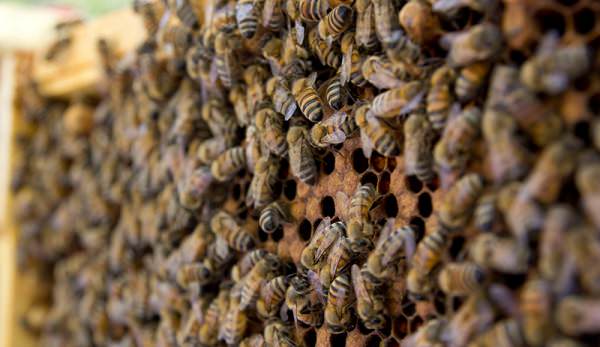 The female honeybee plays many roles in the colony’s system throughout her life. Generally called a worker bee, we are most familiar with her in her role as forager: the bee we see out in the garden, floating from flower to flower, collecting pollen and nectar. We also know there are workers that fan the nectar to make honey, that remove the dead and clean the hive, and that guard the entrance to keep the colony safe from intruders. Her job is endless and tireless. Of the utmost importance is the worker’s role of nurse bee, tending to the colony’s young, or what we collectively call larvae and pupae: brood.

Larvae in all stages of development require care, including protection, examinations and special feeding. As the egg hatches and the larva matures, nurse bees feed the growing young a special mixture called bee bread—a substance that consists of honey and pollen combined, in part, with a special enzyme secreted from their own bodies called royal jelly.

Nurse bees tend to larvae for a total of eight days—at the end of which the larvae are capped in their cells—and during that time, each individual larva is visited approximately 1,300 times per day by nurse bees. The time each nurse spends with a baby varies on the reason for the visit. Some feedings are rather quick, just a few seconds, depending on its age, while examinations of the developing larva takes a bit longer. Studies have shown that larvae deprived food are addressed more quickly than others, suggesting there might be a “hunger cue” the larvae communicate to the nurses. These studies have also noted that the food-deprived larvae receive longer inspections.

Nurse bees’ responsibility is to all of the castes and sexes of bees; of course, the majority of developing larvae they tend to is worker brood, with a healthy hive reaching populations into the tens of thousands. But nurses also care for the drone brood (there may be several hundred in a given hive) and any growing queens. Rearing queens is much less frequent than raising workers, but every bit as critical, as we know that the queen’s ability to lay eggs and mother the next generation of workers is the only way the hive will continue to survive.

Once a nurse bee, not always a nurse bee, though. All bees in a hive have a job, and the role of nurse is usually assigned to the youngest bees in the colony. Upon hatching, a newborn bee cleans her rearing cell and begins nursing duties. Eventually, that same bee matures and moves on to other household duties: Perhaps it’s building comb or sealing cracks with propolis. Maybe it’s removing the dead, fanning the nectar (aka making honey) or storing away pollen that workers bring in from the field.

The work to be done inside a honeybee hive never ceases. There’s a role to be filled, and each bee pulls her own weight within her colony.