Developed across centuries in Cuba and officially first recognized in 1939, the Cubalaya is a proud, majestic bird that keepers should consider adding! 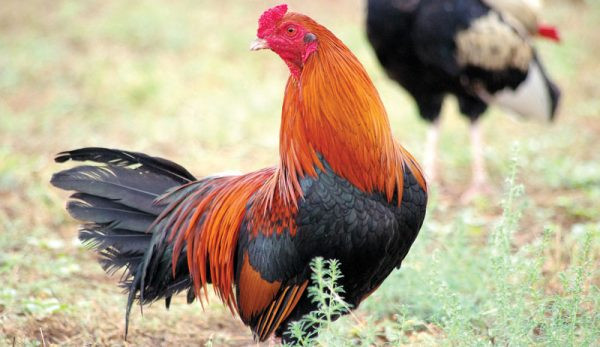 Heritage breeds have fascinating histories and are also superior to many newer breeds when it comes to hardiness and versatility. The Cubalaya, a heritage breed that developed in Cuba, has all these qualities and more. Stunning to look at and easy to handle, it is both rare and unique.

āCubalayas are truly majestic-looking birds, and seem to know it, carrying themselves proudly,ā says breeder Ronald Seagrave. He is the owner of Seagrave Williams Farm, located in Dinwiddie, Virginia, and dedicated to the preservation of endangered and heritage breed poultry.Ā

In the 16th century, when the Spanish started colonizing the island of Cuba, they had already taken over the Philippines. When colonists began arriving in Cuba, they brought Southeast Asian game fowl with them, introducing the ancestors of todayās Cubalaya to the island. Centuries later, in the mid-1800s, more Asiatic fowl were brought to Cuba from the Philippines. These birds were crossed with other European breeds, eventually creating the Cubalaya.

When Cuban chicken-keepers began breeding these birds for certain characteristics, they focused on a fierce expression, a curved beak, a stretched out tail and little to no spurs. As with most breeds of the time, those who kept chickens also wanted a bird that was good for the table and excellent at egg production.Ā

Cockfighting was a popular sport at the time, and these birds were used for this activity as well. Breeding for no spurs helped ensure the birds wouldnāt be permanently damaged during competitions.

In 1939, the Cuban National Poultry Association accepted the Cubalaya into its registry. The breed was first shown at the International Poultry Exhibition in San Francisco, California. This was the first opportunity American chicken-keepers had to see the Cubalaya.

The American Poultry Association quickly accepted the breed into its Standard of Perfection, including the Bantam category.

Read more: Check out these rare and heritage breed chickens for something new in the barnyard!

The Cubalaya is known for several unique features, and its stunning appearance is the most obvious. Considered an elegant, handsome bird, Cubalaya roosters have a stunning ālobster tail,ā which resembles a lobster claw, drapes down at an angle and is rich with lavish feathering. This unusual tail sets Cubalayas apart from other chicken breeds because they are the only birds with this characteristic.

Cubalaya roosters also have pea combs with bright-red earlobes and wattles and flowing feathers throughout their bodies. Theyāre still bred to have little to no spurs to prevent males from injuring each other severely during struggles for dominance.

The hens of this breed also have tails that drape down similar to the roosterās lobster tail but are considerably smaller. They
are often a wheaten color with a darker cinnamon-colored head and neck or are solid black. Some are a blue-red wheaten, which is referred to as āashen.āĀ

Itās a slow-maturing breed, and individuals can take three years to reach their full adult size.

As with many heritage breeds, Cubalayas are valued for their versatile uses. Cubalayas are excellent layers, with hens reliably producing small- to medium-sized, cream-colored eggs. They also make good meat birds and are used often for this purpose in their native Cuba.

Despite their sharp beaks and fierce eyes, Cubalayas are surprisingly friendly birdsāat least with humans. While Cubalayas can be aggressive with other birds, theyāre known for developing relationships with their human caretakers and make great pets.

āCubalayas are proud birds, but very curious and friendly,ā Seagrave says. āThey have wonderful temperaments. Even as chicks, they are curious and not skittish.āĀ

Happiest when they are free-ranging, these active birds enjoy hot, humid weather and make great foragers. Some keepers say Cubalayas donāt like being confined and can get rather noisy when theyāre feeling cooped up.

As with many heritage breeds, Cubalayas are hardy and a good choice for beginning chicken owners.

āCubalayas are easy to keep due to their good nature, and they tend to be extremely healthy birds,ā Seagrave says. āDue to their friendly, curious nature, they lend themselves to being a good breed for young or novice keepers.ā

If you want to breed chickens, Cubalayas are a good choice because the hens tend to be broody. So no assistance is needed in raising Cubalaya offspring. The chicks are usually fearless and must learn caution against predators from other birds in the flock.

The Cubalaya is a rare breed that has been ranked on The Livestock Conservancy Conservation Priority List as āCritical.ā This means the breed has fewer than 500 birds in the U.S., with five or fewer primary breeding flocks (50 birds or more) and an estimated global population less than 1,000.Ā

The Livestock Conservancy exists to help save heritage breeds such as the Cubalaya, which are losing numbers as a result of modern agriculture. A few specialized types of poultry make up the majority of chickens used in agriculture, and traditional breeds have fallen out of favor. Small family farms where these breeds once thrived are disappearing at an alarming rate, and with them, historic breeds are disappearing as well.

Even in the breedās native Cuba, the Cubalaya is becoming scarcer. American breeders seem to be the breedās greatest hope to avoid extinction.Ā

āAfter educating ourselves on these birds and seeing them in personāthey are simply majestic-looking birdsāthey were an easy choice to add to our program,ā says Seagrave, whose farm is a nonprofit that helps protects endangered livestock and poultry breeds from extinction.

In 1873, when the APA first began registering standard chicken breeds, these chickens were well adapted to outdoor production in various climates. They were hearty and long-lived and reproduced easily, providing an important source of protein to the growing population of the U.S. well into the mid-20th century.

When chicken breeding for egg and meat production became industrialized, rapidly growing hybrids were preferred. Breeds such as the Cubalaya were sidelined. Today, the Cubalaya is one of three dozen breeds of chickens in danger of extinction.Ā

The Cubalaya is beautiful and exotic, with many positive qualities that make it a great choice for chicken keepers. Consider adding this special breed to your flock. Youāll help to preserve a piece of history.Ā