The Dangers of Urban Farming

Photo by Audrey Pavia Randy with Rio, who haunts his dreams. My husband Randy grew up in the mean streets of New York City, in a tough Italian-American neighborhood. While kids living in rural communities were raising lambs for 4-H, Randy was fighting off muggers, crazy people and bullies. He learned to survive with his […] 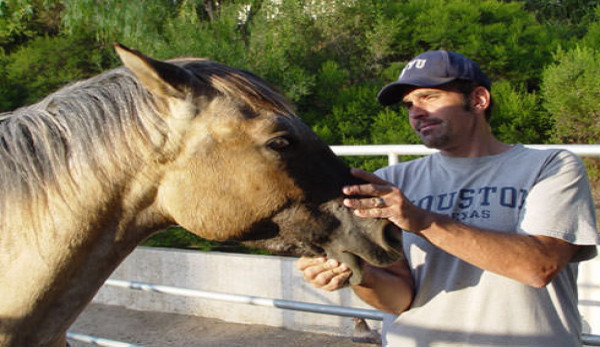 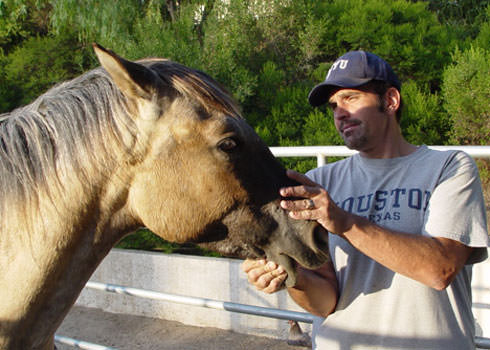 Randy with Rio, who haunts his dreams.

My husband Randy grew up in the mean streets of New York City, in a tough Italian-American neighborhood. While kids living in rural communities were raising lambs for 4-H, Randy was fighting off muggers, crazy people and bullies. He learned to survive with his fists.

Fast-forward a few decades later. Randy is now the prime caretaker of our small urban farm. He tends to the chickens during the day, tossing them scratch, fetching eggs from the nest boxes and keeping the coop supplied with food and water. He also manages our three horses for me while Iâ€™m at work, walking them to the community arena for turnouts, cleaning their stalls and filling up their water barrels.

It would seem that his life on our tiny 1/2-acre urbanÂ farm is about as different from his youth in Manhattan as it gets. Apparently, not so. I found this out the hard way the other night.

It was 5:30 a.m. and I was sound asleep when I felt a blow to my left eye. I sat up in bed with my hand covering my face, and yelled â€śOuch!â€ťÂ

â€śYou just socked me in the eye!â€ť I told him as I got out of bed and staggered to the bathroom mirror to check out the damage.

â€śI was having a nightmare,â€ť he said. â€śI was playing basketball at Madison Square Garden, and there were horses on the court. One of them started guarding me, and he tried to bite me. So I punched him.â€ť

I immediately thought of howÂ Rio, our 2-year-old gelding, is constantly swinging his mouth around in play, acting as if he is going to bite. Since Randy spends the most time with Rio, he spends a lot of time dodging these phantom bites. Apparently, Rioâ€™s behavior is affecting Randyâ€™s sleep.

My shock at waking up with a punch to the eye was soon replaced with hysterical laughter after hearing about this dream. As I sat doubled over on the edge of bed wiping tears from my cheeks, I couldnâ€™t help but think how much Rio the comedian would appreciate this story if only he could understand.Â Â

The next morning, my eye had a red mark under it where Randyâ€™s hand had landed in its pursuit of the fouling equine. I still thought it was pretty funny, and couldnâ€™t wait to get to the office and tell my co-workers the story of how my husband popped me in the eye.