The Difference Between Organic and Farm Raised

With a lot of hype about food labels and farming practices, it's important to know the truth about the meat you're buying and understand the labels you can use on your own farm products. 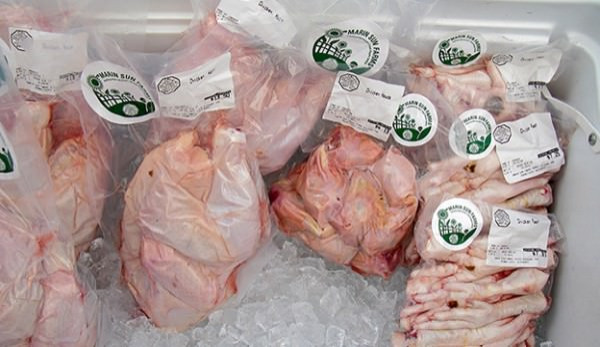 As a farmer wanting to market yourself in the best way to customers, and as a consumer wanting to purchase foods that are right for you, you’re faced with a lot of choices. There are many labels thrown around in the food and farm arenas, and you might be wondering what exactly they mean. When it comes to the difference between “organicâ€ť and “farm-raisedâ€ť meats, in particular, you have environmental, ethical, health and business considerations to weigh.

You can argue that all food is “organicâ€ť in that it essentially comes from a carbon source. To be Certified Organic is entirely different, and that’s what organic food or farming actually refers to. The USDA regulates the term organic, reserving this label for farms that follow the National Organic Program standards. While you can certainly employ organic growing practices on your farm without giving it a label, you can’t call your products “organicâ€ť without USDA certification.

The benefits of organic are many, but this is a complicated designation to earn. According to the USDA, Certified Organic farms:

The benefits of organic certification to farmers include:

When you purchase meats with an organic label, you know you are purchasing meats that have been produced without the use of synthetic chemicals, antibiotics and genetically modified organisms. “Regulations require that animals are raised in living conditions accommodating their natural behaviors (like the ability to graze on pasture), fed 100-percent organic feed and forage, and not administered antibiotics or hormones,â€ť says Miles McEvoy, the NOP deputy administrator. USDA ensures their standards with inspections, a required Organic Systems Plan for every organic farm and an annual review of farms’ records.

You will hear many complaints about the organic label that range from too-lax rules to mistrust in government oversight. Still, USDA Certified Organic is regulated by known government standards, as opposed to many other meat labels that are not regulated by anyone.

You can view USDA Organic standards online, as well as learn more about what it takes to become Certified Organic.

What Is Farm Raised?

“Farm raisedâ€ť has a fuzzier definition than “organic.â€ť There is no legal guideline for farm-raised foods, rather it can mean any food that’s been raised on a farm. Most often, you’ll find meats being called farm raised when they’ve been raised on a small-scale, sustainable farm rather than on an industrial, factory farm. Because there are no regulations for this term, ask what “farm raisedâ€ť really means before making a purchase. It’s possible you could be paying a premium for meats that have this label but the label doesn’t mean what you think.

The benefits of farm-raised products vary with the farm this food was actually raised on. Farm-raised meats could be produced locally, organically, sustainably or none of the above.

You will often find farmers marketing their meat as farm-raised if they either do not fit the entire spectrum of the USDA Organic Certification model or if they do use strictly organic practices but either cannot afford to or chose not to pursue USDA organic certification. There’s no regulation for “farm-raisedâ€ť meats, so there’s no way to tell what the benefits are unless you can ask the farmer yourself.

How They’re Different From Conventional Meat And Eggs

In comparing organic, farm-raised and conventionally raised animal products, you can look at taste, nutrition, price and environmental impact. One or all of these items could factor into your decisions about food purchases and farming practices.

As a farmer producing organic meats and eggs or farm-raised meats and eggs, your input prices are higher than your conventional counterpartsâ€”especially for an organic farmâ€”and your customers will notice this reflection in your sticker price right away. Organic grains, fertilizers and sometimes even processing costs are more expensive. For meat that is 100-percent grassfed, cattle take longer to gain weight, so a farmer needs to keep and care for that animal for a longer time period. Additionally, small-scale farmers often can’t take advantage of the bulk purchasing power that conventional, large-scale farmers benefit from. For small-scale farmers, finding a meat processor that is willing to work with you is a challenge, and sometimes you need to travel long distances to get to them.

Differences in flavor of organic or farm-raised meat and eggs compared to those that are conventionally raised tend to be subjective. Feeding an animal organic feed versus conventional feed has not been shown to create a flavor differenceâ€”it would come instead from the variety in an animal’s diet, so pasture-raised meats or grassfed meats can have a different flavor than meats that were produced by heavy grain consumption.

According to Sustainable Table, studies have shown milk from pasture-fed cows has up to five times the CLA as milk from grain-fed cows; free-range chicken has less fat and fewer calories than conventionally raised chicken; and eggs from pasture-raised hens have less fat, more vitamin A and more omega-3s.

Animals raised on pasture require fewer high-resource inputs, such as chemical fertilizers, pesticides and herbicides for grain crops and forage. Organic operations can use none of these synthetic chemicals, though there are substances that they can use that can also be harmful to the environment if not properly managed.

Animals produced in concentrated animal-feeding operationsâ€”aka CAFOs or factory farmsâ€”are often fed subtherapeutic levels of antibiotics to prevent them from getting sick in their stressful, crowded conditions. These antibiotics find their way into the atmosphere and waterways. The immense amount of waste produced by CAFOs is a challenge for producers to manage and poses an environmental threat, as well. The waste from well-managed sustainable and organic farms is not concentrated, rather naturally spread out while the animals graze, and returns nutrients to the land that the animals utilize while grazing.

Meats produced and purchased locally have a smaller environmental impact, as the cost and resources required to transport food across the country and around the world are significant. It’s important to note that environmental impact varies from species to species, as well. According to the Environmental Working Group, beef has more than two times the emissions of pork; nearly four times that of chicken; and more than 13 times that of vegetable proteins, such as beans, lentils and tofu.

Other Considerations With Meat

When you start really thinking about your food choices and your farming methods, you learn how food and farming choices affect the entire world. In addition to the differences in taste, nutrition, environmental impact and price between organic, farm-raised and conventionally raised meats, you can look at health considerations, ethical considerations and economic issues.

These range from antibiotic concerns to overall human dietary needs. The antibiotic overuse mentioned aboveâ€”antibiotics given to healthy animals to prevent them from getting sickâ€”has an even greater effect on human health than it does on environmental health. The Union of Concerned Scientists states, “An estimated 70 percent of antibiotics produced in this countryâ€”nearly 13 million pounds per yearâ€”are used in animal agriculture for these non-therapeutic purposes. This amount is estimated to be more than four times the amount of drugs used to treat human illness.â€ť All of this antibiotic use is creating bacteria that are resistant to the antibiotics that are vital to improving and maintaining human health.

Aside from the antibiotic concern, the standard American diet features too much meat to be healthful or sustainable. According to the Johns Hopkins Bloomberg School of Public Health, Americans’ meat consumption has nearly doubled in the last century, with most Americans eating more than 1.5 times the average daily protein requirement. “A strong body of scientific evidence links excess meat consumption, particularly of red and processed meat, with heart disease, stroke, type 2 diabetes, obesity, certain cancers and earlier death,â€ť the website continues. Thoughtful choices about sources of meat and eating less meat can improve these issues.

Ethical concerns surrounding meat are often attributed only to extreme animal-rights groups, but there are animal- and human-welfare concerns to consider when choosing organic, farm-raised or conventionally raised animal products. It’s up to your own morals whether you think animals should be used for food purposes at all, whether they should be allowed to live as they are naturally designed to live, or whether they should be confined and fed in ways that are not natural to them.

Ethics go beyond animals to the people who care for them, as well. Worker conditions can vary between organic farms, small-scale and sustainable farms, and conventional, large-scale farms and feedlots and certainly vary within those groups, as well.

Popularity of organic and other labels leading to corporate takeover is brought up in sustainable-living circles every time a major food brand purchases an organic brand or a small-scale food brand. Your dollars are your vote for large-scale, corporate food system versus a more local, small-scale food system. This matters whether you purchase organic, farm-raised or conventionally raised meats.

Other Food Labels To Clarify

In considering your purchase or production of organic versus farm-raised meats, you’ve of course seen many other food labels that describe how meats have been produced. A few to know include:

The Importance of Knowing Your Farmer’s Practices

As people’s interest in food sources continues to grow, food producers’ interest in capitalizing on this will, too. Some farming practices and food labels are little more than marketing schemes, so it’s important to decode exactly what they mean. If you’re purchasing farm-raised meats from your area, you’ll want to know what farming practices are going on around you for the sake of the environment and your own health. Whether the meat you purchase or decide to raise is organic, farm-raised or other, be informed about your choices in food and farming.