Still waiting on your pullets’ first eggs? Here’s the scoop on the first-season laying habits of new hens. 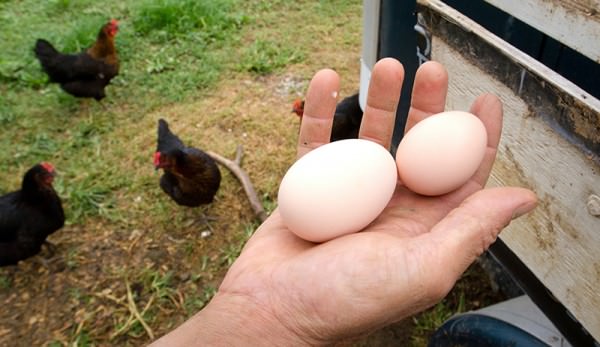 Your spring chicks are all grown up. They’ve moved from the brooder to the coop. They’re happily scratching in the dirt for bugs, lolling in the sun, taking dust baths and marching into the coop at dusk to perch on their roosting bars for the night.

And now the waiting game begins.

Where Are My Eggs?!

It can seem like forever from the time you first hold that tiny peeping ball of fluff in your hands until she lays her first egg. In reality, most chickens start laying between 18 to 24 weeks old, with the majority starting by week 28. Lighter breeds, such as Leghorns or Andalusians, usually start laying sooner, while heavier breeds, such as Buff Orpingtons, Australorps and Wyandottes, tend to start a bit later.

I’ve found that colored-egg layers start later than others — or maybe it just seems that way because I’m so eager to see that first blue or olive green egg in the nest! I’ve had a few that didn’t start laying until around week 30, and one of my Ameraucanas didn’t start laying until she was a whopping 39 weeks old! But her gorgeous blue eggs more than made up for the longer wait.

Even once young hens—called pullets until they are a year old—start laying, it can take them awhile to get on a regular schedule. You might collect an egg for several days in a row, and then nothing for another few days. It takes approximately 26 hours to produce an egg, but no hen lays an egg every single day, even once they are in the swing of things.

Often young layers will lay abnormally large or small eggs. If two yolks are released into the oviduct too close together, you’ll get a huge double-yolked egg. Sometimes, you might collect an egg no larger than a malt ball, commonly called a wind egg or a fairy egg. That’s a glitch in production where no yolk is released, and the white is encased in a miniature shell. Both can be common with new layers.

An egg contains every nutrient our bodies need except vitamin C. To prepare for the big day, be sure your pullets have the proper nutrients in their bodies to create an egg. Around week 18, switch them from a grower feed to layer feed.

Switching to layer feed won’t make a chicken start laying; she’ll lay when she’s ready regardless of whether she’s eating grower or layer feed, but the layer feed has a higher calcium content and is formulated to give her all the nutrients she needs to lay eggs with strong shells. Starting your flock on layer feed too early can result in damage to their kidneys due to the high calcium content, so timing is important.

If chickens don’t get enough calcium in their diet, they’ll start to leach stored calcium from their bones, which is something you want to avoid. Putting out a separate container or dispenser with crushed eggshells or oyster shell is a good idea in addition to feeding calcium-rich layer feed. Feeding the supplement free-choice allows each hen to eat as much or as little as she wants, while non-laying hens and roosters will ignore it.

Around the same time you switch to the layer feed, try putting some decoys in the nesting boxes—wooden or ceramic eggs, golf balls or even stones—to show your pullets where they are supposed to lay their eggs. (If you’re adding to your flock and already have laying hens, you can skip this step, because the pullets will imitate the older hens.)

Chickens are inquisitive creatures; they will likely have already investigated the nesting boxes. The addition of the decoys, however, might encourage them to try out the various boxes and get comfortable sitting in them.

Signs That Laying Time Is Near

As a pullet reaches the time commonly called point of lay, her comb and wattles will get larger and turn bright red. Her vent will be pink or whitish, plump, and moist. She might become a bit more vocal, especially as she investigates the nesting area more carefully.

Once a hen starts laying, you will begin to hear her egg song after she lays an egg, which is a loud, triumphant call announcing her accomplishment. It’s thought that hens create a ruckus after laying their egg to ward off potential predators from the nest. She could also be calling the rest of flock, who may have wandered away, wanting to find and rejoin them. Either way, be prepared for lots of celebratory cackling from the coop as soon as eggs start to appear!

Another clear sign that your pullets are getting ready to start laying is the submissive squat. As a hen reaches sexual maturity, she will start to squat at your feet as you come near. She’ll bend her legs and crouch while flattening her back. Squatting is a sign of submission (usually to a rooster but also to you or a more dominant hen in the flock) and a sign she’s ready to mate. Mating and egg-laying go hand in hand, so if you have a pullet who starts to squat, you can be sure eggs will soon follow.

Matching Hens To Their Eggs

The excitement of visiting your coop and peering into each nest box hoping for a surprise never gets old. For me, it’s just as magical today as it was the very first time I put my hand into a nest box and pulled out a warm egg as a child. Adding breeds that lay colored eggs to your flock heightens the excitement, and it also makes it easier to tell which chickens are laying and which aren’t.

If you have a small flock of breeds that lay a variety of egg colors, it’s fairly simple to figure out who’s laying and who’s not, purely based on the color of eggs in the nest boxes. Otherwise, in a large flock made up of all the same breed, unless you catch a hen in the act, it can be difficult to see which hens are laying—but not impossible.

To determine which birds in your flock are laying and which aren’t, look each hen over carefully. A good layer will generally have a pale beak, legs and feet, while a poor layer or hens past the point of lay, have bright yellow appendages. This is because the pigment xanthophylls, which gives an egg yolk its bright-orange color and is found in many plants including leafy greens, marigolds, corn and parsley, is stored in the chicken’s body. Any excess not used for egg production will color the legs and feet of the chicken bright yellow.

A poor layer will generally have a small, shrunken comb; her abdomen will be small and tight; and her vent will be yellowish, dried and puckered. A laying hen will have a rosy red comb, moist vent and a softer, fatty abdomen. If you place your fingers across the vent of a laying hen, there should be ample space—at least three fingers—between her pubic bones and about three fingers (four on a larger breed) between the tip of her breast bone and her pelvis. The measurements on a non-laying hen will be shorter.

Ironically, your non-layers may be some of your more attractive hens with bright, shiny feathers. Good layers often have dull, broken feathers, because they are investing so much energy, and a good portion of the nutrients they ingest, back into their eggs.

If you absolutely need to know if a hen is laying and can’t figure out using one of these methods, then the easiest way to tell for sure is to separate her from the rest of the flock for a few days, or spend a day or two inside your coop watching the activity in the boxes first hand.

Some more unorthodox methods I’ve read to determine which hens are laying are kind of fun. The first requires applying charcoal or ashes along the top of the inside of your nest boxes. (I suppose flour would work better if you have darker-colored hens.) Then, check to see who has the telltale residue on their backs. Another method requires ringing the vent of each hen in a different color lipstick and then matching the smear of color on each egg to the proper hen. I personally think I would just pour myself a cup of coffee and camp out in the coop for a few mornings if I wanted to know that badly!

Once your hens start laying, you might notice one who always seems to be sitting in the nest box. If, upon further inspection, you see that she has plucked out all her breast feathers and puffs up and makes a fuss when you try to move her or collect the eggs, you have a broody hen on your hands. That’s a topic for another article, but suffice it to say a broody is a godsend if you want to hatch some chicks, but can be the bane of your existence if not.