Was this apple tree cursed or was it just a wild variety with haunting characteristics? We might never know. 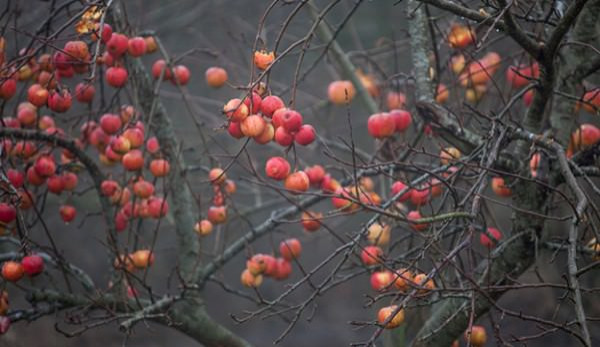 My Facebook feed is filled with people out getting the last of the apple harvest. Is there anything more quintessentially fall than an afternoon in an apple orchard under a crystal blue sky? One of the spooky plant stories that Iâ€™ve uncovered is actually about an appleâ€”a variety called the Micah Rood.

In 1888, the New York Times printed an article about a curious apple that was coming into market from a rural area of Connecticut. They went in search of the origins and found a farmer named Micah Rood. Micah was evidently a well-known lout who was commonly seen sitting under his apple tree, jealously watching others who were better off than he was. One day a traveling salesman was found dead underneath Micahâ€™s tree, his head split open and his packs empty. Everyone in town believed Micah to be guilty, but there wasnâ€™t any evidence, so nothing could be done. The following fall, Micahâ€™s tree began to produce apples that were red on the outside with white flesh but for a blood red stain in the center. Everyone believed that this was a curse from the man who had been killed. Micah became an even bigger recluse, either because of guilt or because everyone was unjustly suspicious. Either way, he died alone, as he had lived.

There remains quite a bit of speculation about this tale. Is it true? How can all of this be explained? I thought I would do a little bit of digging myself.

Johnny Appleseed didnâ€™t start to share apple starts across North America until almost 100 years after the salesmanâ€™s misfortune, not even being born until 1774. Johnny is an important ingredient in unraveling the story here. In one of my favorite books of all time, The Botany of Desire by Michael Pollan, we learn that Johnny preferred wild varieties of apples to anything with a proper name. Wherever he went, he planted seeds, establishing unique orchards every time his plantings sprouted. Johnnyâ€™s preference for wild apples was because the small, inedible fruits were generally used mainly to produce alcohol.

But every once in awhile, one of the seeds would produce something wonderful. The really fascinating thing about apples is that the seeds donâ€™t make the same tree every time. That Braeburn apple that you like is produced by taking grafts from the original tree and growing that plant up, perpetually making copies of copies and so on. A wild apple is just that: wild. Each seed makes something wholly unique in the landscape.

Back to Micah Rood. In 1693, when the first apples with blood spots are said to have appeared, this continent hadnâ€™t yet received any grafts by the more well-known red-flesh apples of Europe. Johnny Appleseed hadnâ€™t started his westward trek, but most of the orchards that were already planted in his time were in the northeastern part of the country. Thatâ€™s how Johnny learned about apples in the first place. If we know that an apple with red flesh spontaneously appeared in Europe, it isnâ€™t too difficult to place one in the Americas, as well.

Weâ€™ll never know if there is truth to the story of Micah Rood. It seems that at least in 1888, the grafted children of the original tree still existed. The New York Times article was written to explain the odd apples. Whether they werenâ€™t very good keepers, difficult to harvest or simply got edged out by the newest varieties, the Micah Rood appears to have disappeared from any known orchards.

What a shame. I think it would be great to make a Halloween apple pie!